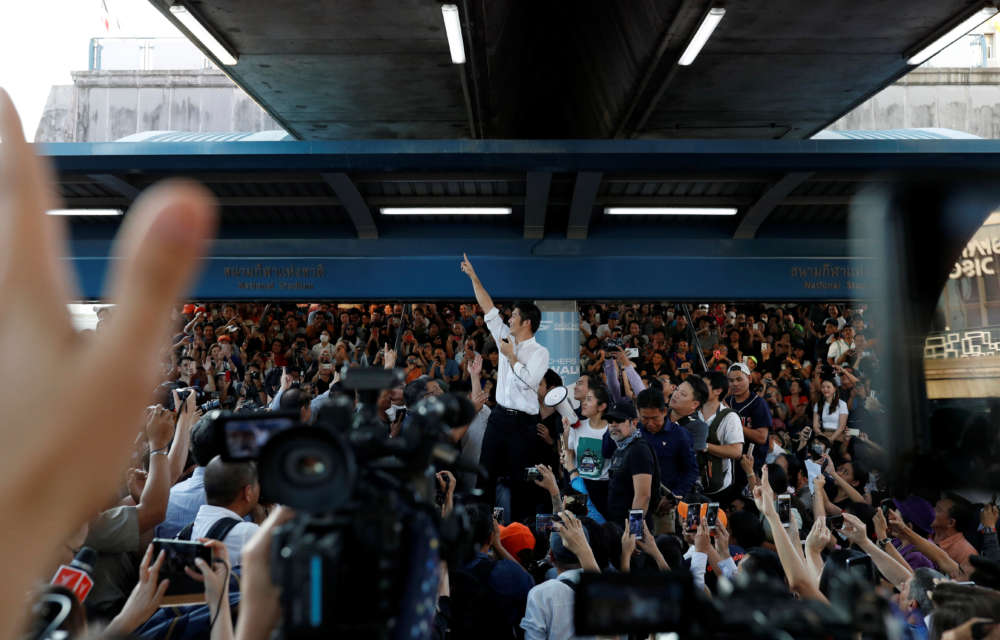 BANGKOK – Thousands of people joined Bangkok’s biggest protest since a 2014 coup on Saturday, after authorities in Thailand moved to ban a party that has rallied opposition to the government of former military ruler Prayuth Chan-ocha.

The demonstration, called a day earlier by Future Forward party leader Thanathorn Juangroongruangkit, a 41-year-old billionaire, revived memories of the spasms of street protest that have roiled Bangkok periodically over the past two decades of turbulent politics.

But there was no sign of a major police presence or attempt to block the biggest demonstration since Prayuth seized power in 2014 in the name of ending street violence.

“This is just the beginning,” Thanathorn told the cheering crowd that spilled across walkways and stairways close to the MBK Centre, in the heart of Bangkok’s shopping and business district.

“Today is a show of strength so that in future others may join us. We’re just here today as a test run. Prayuth, don’t be afraid yet. The real thing is next month.”

Thanathorn has emerged as the most outspoken opponent of the government headed by Prayuth, 65, since an election in March that the opposition said were manipulated to favour the army.

Last month, the Constitutional Court found Thanathorn guilty of holding shares in a media company on the date his candidacy was registered for the election, disqualifying him as a member of parliament. Thanathorn disputed the ruling.

At the protest, demonstrators chanted “Long live democracy, dictatorship get out”.

Thanathorn earlier signed an agreement with six parties in an opposition alliance to push for changes to the constitution that was drawn up by the junta before the election.

He also won their support for the protest.

Among those parties was Pheu Thai, which won the most seats in the 500-member House of Representatives lower house but has taken a lower profile in challenging the government than Future Forward, which came third in the election.

Palang Pracharat, the pro-military party formed last year by members of the junta’s cabinet, came second. Prayuth told reporters on Friday it was inappropriate to organise a demonstration towards the end of the year.