Thomas Cook collapses: Why and what happens now? 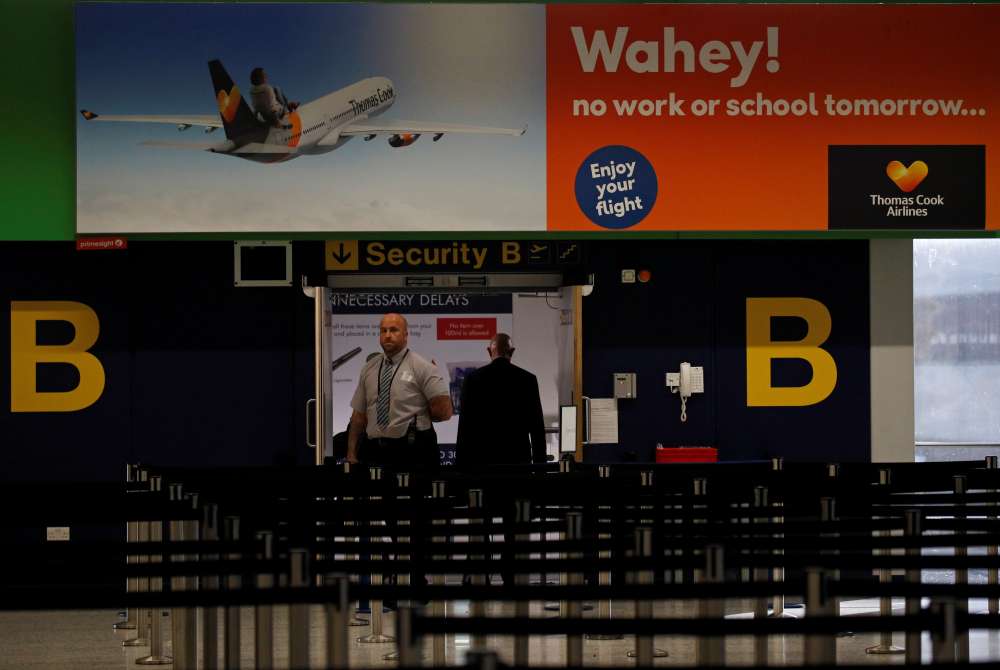 Thomas Cook, the world’s oldest travel firm, collapsed on Monday, stranding hundreds of thousands of holidaymakers around the globe and sparking the largest peacetime repatriation effort in British history.

What happens now and why did it collapse?

The firm ran hotels, resorts and airlines for 19 million travellers a year in 16 countries, generating revenue in 2018 of 9.6 billion pounds ($12 billion). It currently has 600,000 people abroad, including more than 150,000 British citizens.

WHAT HAPPENS TO TOURISTS?

The British government has asked the UK Civil Aviation Authority (CAA) to launch a repatriation programme over the next two weeks, from Monday to Oct. 6, to bring Thomas Cook customers back to the UK.

“Due to the significant scale of the situation, some disruption is inevitable, but the Civil Aviation Authority will endeavour to get people home as close as possible to their planned dates,” it said.

A fleet of aircraft will be used to repatriate British citizens. In a small number of destinations, alternative commercial flights will be used.

About 50,000 tourists are stranded in Greece, mainly on islands, a Greek tourism ministry official told Reuters on Monday.

The CAA has launched a special website, thomascook.caa.co.uk, where affected customers can find details and information on repatriation flights.

For those customers not flying from Britain, alternative arrangements will have to be found. In Germany, a popular customer market for Thomas Cook, insurance companies will coordinate the response.

WHAT IS THE ADVICE TO PASSENGERS?

“Customers currently overseas should not travel to the airport until their flight back to the UK has been confirmed on the dedicated website,” the CAA said.

“Thomas Cook customers in the UK yet to travel should not go to the airport as all flights leaving the UK have been cancelled.”

WHO WILL PAY FOR THE COST OF HOTELS?

The CAA said it was contacting hotels and other companies likely to be impacted by Thomas Cook’s collapse to reassure them they will be paid.

The regulator said that if holidaymakers are being asked to settle bills they should contact the CAA.

Thomas Cook package holiday customers are covered by ATOL – Air Travel Organiser’s Licence – which protects accommodation and return flights. However, the CAA said some customers may be asked to relocate to other accommodation.

WHAT HAPPENS IF A HOLIDAY IS BOOKED FOR THE FUTURE?

The CAA says that if customers have not yet started their trips most holidays and flights booked with Thomas Cook are now cancelled and customers should not go to the airport.

Thomas Cook said it had entered compulsory liquidation and an order had been granted to appoint an official receiver to liquidate the company.

AlixPartners UK LLP or KPMG will be appointed as special manager for the different parts of the business.

The impact is already being felt further afield, with Australian travel group Webjet Ltd saying it was 27 million euros ($30 million) out of pocket and British online travel group On The Beach saying it would suffer from helping its customers in resorts who had flown with Thomas Cook.

The collapse could provide a boost, however, to major rival TUI, whose shares surged more than 10% in early Monday trading, and to Europe’s overcrowded airline sector, which could benefit from the closure of Thomas Cook’s airline.

WHY DID IT COLLAPSE?

Thomas Cook was brought low by a $2.1 billion debt pile that prevented it from responding to more nimble online competition. With debts built up around 10 years ago due to several ill-timed deals, it had to sell three million holidays a year just to cover its interest payments.

As it struggled to pitch itself to a new generation of tourists, the company was hit by the 2016 coup attempt in Turkey, one of its top destinations, and the 2018 Europe-wide heatwave which deterred customers from going abroad.

Thomas Cook needed another 200 million pounds on top of a 900 million pound package it had already agreed, to see it through the winter months when it receives less cash and must pay hotels for summer services.

The request for an additional 200 million pounds torpedoed the rescue deal that had been months in the making.

Thomas Cook bosses met lenders and creditors in London on Sunday to try to thrash out a last-ditch deal to keep the company afloat. They failed.

Under the original terms of the plan, top shareholder Fosun – whose Chinese parent owns all-inclusive holiday firm Club Med – would have given 450 million pounds ($552 million) of money in return for at least 75% of the tour operator business and 25% of its airline.

Thomas Cook’s lending banks and bondholders were to stump up a further 450 million pounds and convert their existing debt to equity, giving them in total about 75% of the airline and up to 25% of the tour operator business.