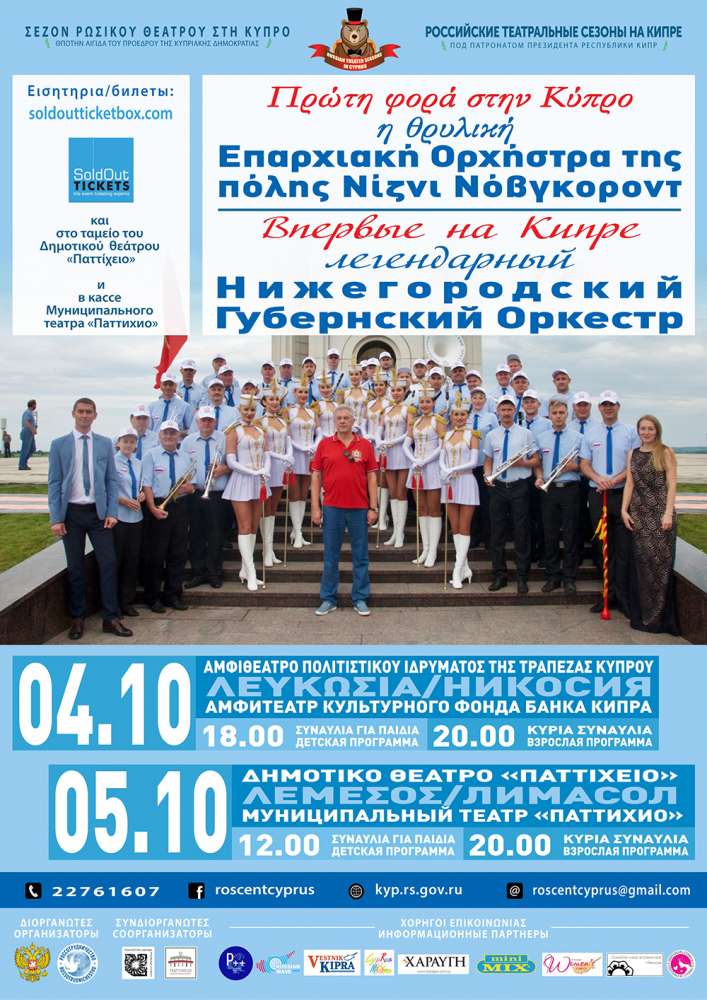 The Russian Cultural Centre in Cyprus invites you to its concerts in the Nizhny Novgorod Provincial Orchestra under the direction of Yevgeny Petrov! The orchestra has been awarded the Grand Prix at Russian and international competitions, as well as the Nizhny Novgorod Prize. It participated in the cultural events of the XXI Winter Olympics in Sochi and in 2015 inaugurated the Days of Russian Culture in the world exhibition “EXPO 2015 MILANO”. It will not be just a concert: the orchestra is known for performing a special kind of spectacle – the defilé (the musicians move at the same pace as the music and perform complex figures).

The festival of musical colors will create a unique atmosphere of harmony of sound and soul. You will hear easily recognizable patterns from Russian and foreign cinema and popular music compositions. The orchestra’s repertoire includes works of various styles and directions from classical to contemporary jazz compositions, Russian folk song covers, targeting listeners of different generations.

From the first notes, the children’s audience will recognize their favorite tunes and magical musical images from well-known heroes from “Masha and the Bear” to “Bremen Musicians.” For children, this concert can become a landmark – as it can become the key to the gateway to the magical world of music. All listeners are awaiting a program of fun and contests!

The concerts will be presented in the framework of the international program ” Russian Theatre Seasons in Cyprus”, of the Embassy of Russia and the Russian Cultural Centre, which is implemented for a second year under the auspices of the President of the Republic of Cyprus, Mr. Nicos Anastasiades.

A few words about the artistic director of Nizhny Novgorod Provincial Orchestra:

Yevgeny Petrov – Honored Artist of the Russian Federation, awarded the “Regional Personality of the Year” regional award by Business Quarter Magazine, awarded the “NN Sobaka.ru” award in the “Music” category. In 1984, he founded the Brass Quintet, which then gave concerts in Russia and abroad. The Nizhny Novgorod Provincial Orchestra was created on its own initiative and proposal to the provincial authorities.