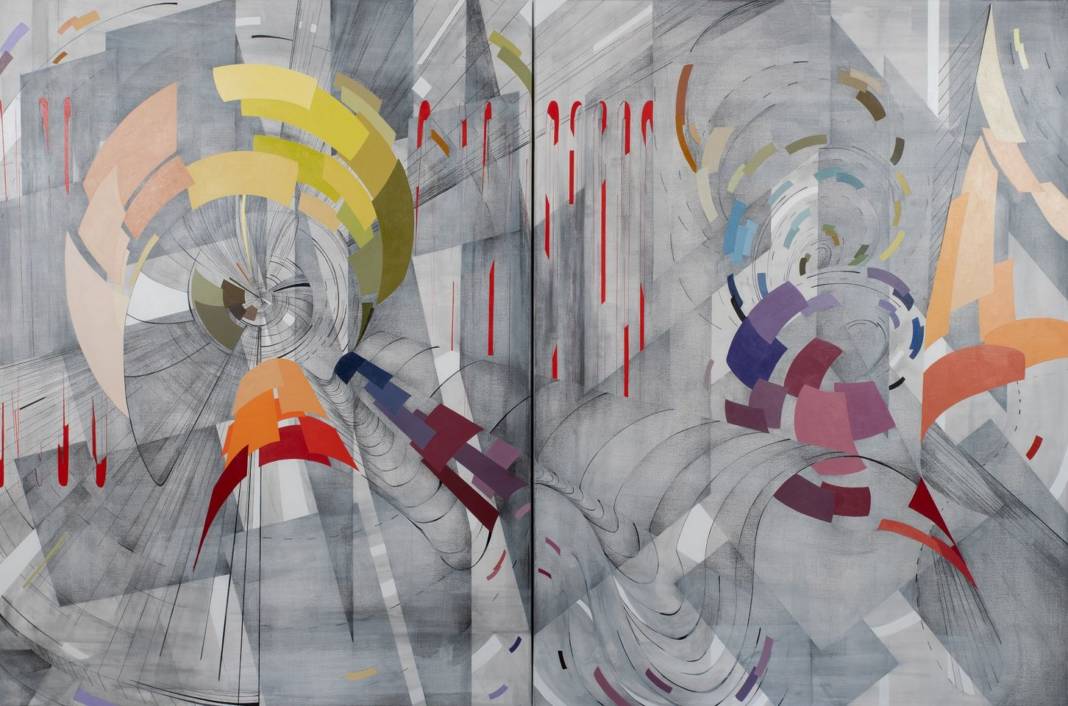 Opening this Saturday 12.11.2022 at 19:00. At The O Gallery Maria Alexandrou will be showcasing works in a solo exhibition entitled “Sequence of Colour”.
Below is a text that explains the visual work of Maria Alexandrou as it will be presented in the “Sequence of Color” exhibition:
The thematic axes of the unit of her works revolve around the issue of creating visual space, with the use of geometric shapes and lines. Their choice as a decisive formative factor is mainly due to her earlier training as a mathematician. Applying mathematical and geometric properties to art expressed in symbols is an ancient practice. It derives from a more general wisdom rooted in a kind of Pythagoreanism and religiosity. In art, in modern sculpture, in architecture, in music, in technology and in general, mathematics has a dominant role.
A graduate of the School of Applied Mathematics, as well as the Department of Visual and Applied Arts, AUTH, during her studies in painting she pursues the possibility of combining mathematics in art.
Certain mathematical curves have the ability to evoke different emotions depending on the quantitative relationships and ratios they express. They also convey the concept of order, rhythm and an inner harmony.
The geometric forms that she seeks to include in her visual research form such curved surfaces. The forms disappear and move into infinity. The overlapping of the shapes as well as the quantitative and qualitative contrasts, cause the illusion of movement and depth. The main idea is to create a three-dimensional space on a two-dimensional surface, leaving what causes the work to the free viewing.
The choice of color combinations is based on the personal aesthetics shaped by her studies and her individual path. The plain colors without the existence of the tactile texture, were chosen in harmony with the rigor and rationality of mathematics.
Mathematical logic, composition, harmony, quantitative and qualitative contrasts, movement, depth, color, material and aesthetics, are topics that distinguished Greek or international artists dealt with in the past. (Opi Zouni, Nausika Pastra, Pantelis Xagoraris, Mondrian, Johannes Itten, Paul Klee, Wassily Kandinsky)
The complexity of the composition, which seeks the illusion of space, requires perfection in the execution, as well as the relationships between the shapes and the lines, either in terms of the area they occupy or in terms of the brilliance or not of the contrasts, aims at the organized action of expressive visual forces, where the shapes disappear in a dynamic game that hopes to convey a meaning corresponding to each viewing of the work.

The O Gallery is an independent commercial art gallery operating from our split-level space in the heart of Larnaca. Our primary goal is to promote the existing generation of artists and also develop the next through exciting and engaging exhibitions and events.

They focus on displaying original artworks that are not always going to be about the name but mainly about the image and the art itself that will lead the way and the story. Our gallery aims to be a platform for the vast array of artistic talent to showcase their aptitude through high-quality and strong visual exhibitions.