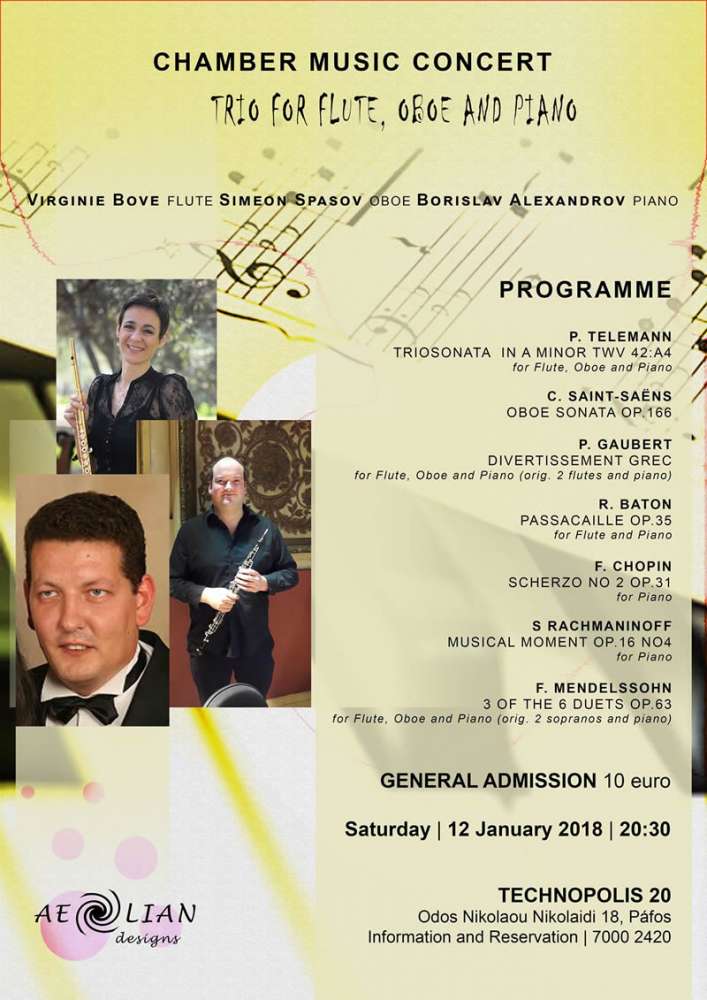 Musicians from the Cyprus Symphony Orchestra, Virginie Bove (flute) and Simeon Spasov (oboe) will perform together with the pianist Borislav Alexandrov, professor at the European University, a program that includes works by Telemann, Gaubert, Saint-Saëns Mendelssohn, Rachmaninov, Baton and Chopin. This Trio has been founded especially for a unique chamber music evening at Technopolis 20, on Saturday, 12th of January 2019, at 8:30pm.

A few words about the musicians
Virginie Bove was born in 1977 in Paris. Her interest and love for music started at an early age and lead her to begin studying the flute at eleven years old. She had the opportunity to study with some brilliant flutists in France and abroad, including M. Beaucoudray, M. Debost, M. Dufour, C. Lefèbvre, P. Dumail, P. Bernold and G. Alirol. Virginie completed her studies attaining first prizes from the Conservatoire of Paris and of Saint-Maur and won in parallel several national competitions. In 1999, she had her debut as a soloist by performing Lipkin’s Flute Concerto, European Premiere. Between 1995 and 2000, she was the Principal Flutist of Paris Sorbonne Symphony Orchestra under the direction of J. Grimbert and performed in many venues in Europe and in United States of America. By 2000, Virginie Bove established herself as a freelance Flute and Piccolo player, working with remarkable conductors. Since 2005, she is the Sub-Principal Flute player in the Cyprus Symphony Orchestra. The chamber music always occupied a significant part of her activities; she performed and recorded world premiere compositions especially made for her.
She is the founder of Evohe Wind Quintet and has been collaborating with other musicians regularly.
Discography:
1995: Flute and Guitar/Piano with Olivier Herbay
2012: Flute and Harp with Angela Madjarova
2013: Flute and Piano with Agata Jozwik

Borislav Alexandrov was born in Bulgaria. He started taking piano lessons at the age of 5 years old and only 3 years later he gave his first piano recital and collaborated as a soloist with a symphony orchestra for the first time. He continued his studies at the National School of Music ‘Liubomir Pipkov’, Bulgaria and State Music Academy ‘Pantcho Vladigerov’ in Sofia, Bulgaria with Prof. Dora Lazarova holding a Bachelor and Master Degree in Piano Performance with distinction. He is a PhD candidate in Music at the South-Western University ‘Neophyt Rilski’, Bulgaria. During his studies, he took part in masterclasses of well-known artists such as Eric Heidziek, Michael-Anchel Sheba, and Bojidar Noev, he has been awarded with prizes and medals national and international piano and chamber music competitions ‘Wiener Classic’ piano competition, ‘Music & Earth’. He has performed widely in Europe and the Middle East, taking part in recitals and music festivals organised by the British Council, Cyprus Composer Society, Cyprus Opera Organization, Evangelia Tjiarri Foundation, Avantgarde Cultural Foundation, embassies and others and has collaborated many times with Symphony Orchestras as a soloist. He has recorded works the National Radio of Bulgaria and the National Television of Bulgaria. Many of his students have been awarded with prizes in national and international piano competitions. He has participated in conferences abroad and is a member of the International Piano Duo Association. After his studies he was appointed as a piano teacher at the soloist department of the State Music Academy Pancho Vladigerov and the Music Department of the South-Western University ‘Neophyt Rilski’, Bulgaria. Since 2004, he works in Cyprus as a piano teacher at the Nicosia Music Lyceum and the European University.

Simeon Spasov was born in Varna, Bulgaria, where he started his oboe studies at the National Music School at the age of 11. Then went on to study at the National Music Academy in Sofia, Bulgaria, graduating with bachelor’s degree in 2011 and masters in 2015. He has been a member of the Sofia Radio Orchestra, Sofia Academic State Orchestra, New Symphony Orchestra Sofia, and an assistant principal oboist of Oquestra Amazônas Filarmônica in Manaus, Brazil for six years until 2018, when he began his tenure as a principal oboe at the Cyprus Symphony Orchestra. Laureate of many soloist and chamber music competitions, participant at the masterclasses of Hansjors Schellenberger, David Walter, Pierre Feit, Christiam Wetzel, Florian Grube, Gotfried Pokorny amongst others. Simeon has been an oboe professors at the art lyceum “Claudio Santoro” in Manaus since 2014 and a permanent guest professor at the Amazonian Music foundation “Vale Musica” in Belém, Brazil.

By In Cyprus
Previous articleQueens Boulevard
Next articleUpdate: Fire on rig at Limassol port under control