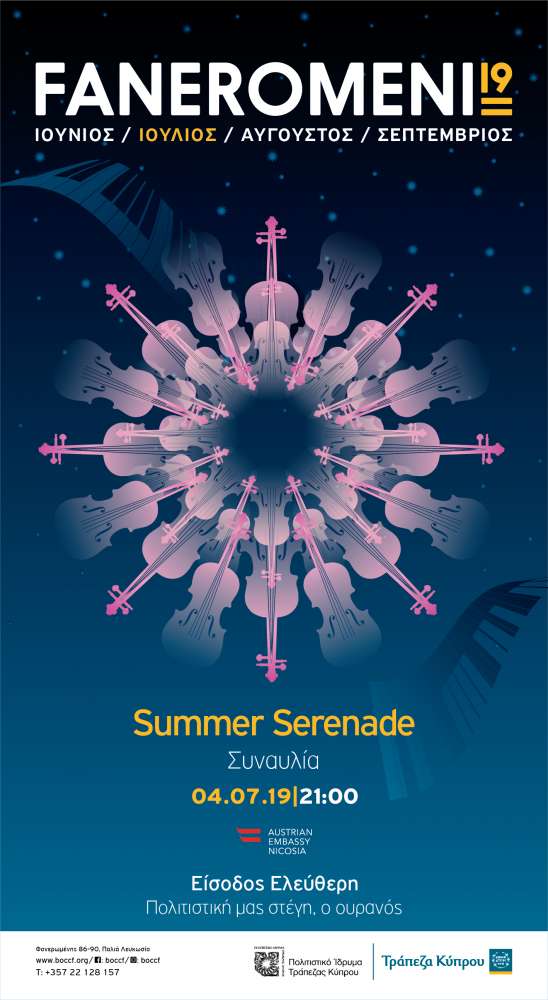 Music lovers should prepare for an unforgettable evening of chamber music, brought to you by an ensemble of talented young musicians who are part of the Vienna Philharmonic Orchestra.

The event, part of the Faneromeni19 Festival, will take place on Thursday, July 4 in the patio of the Bank of Cyprus Cultural Foundation.

The performance is a partnership between the Cultural Foundation and the Embassy of Austria in Cyprus.

The string quartet, offering a rich bouquet of exquisite chamber music as well as the “Summer Serenade,” comprises the two siblings, Luka and Lara Kusztrich (violin), Clara Schwaiger (viola) and Benedikt Sinko (cello). Accompanying them on the piano will be the established Cypriot pianist Nicholas Constandinou, with works by Ludwig van Beethoven, Ernst Krenek, Hugo Wolf and Franz Schubert.

The Austrian musicians are all graduates of the Angelika Prokop Summer Academy of the Vienna Philharmonic Orchestra.

Over the past 10 years, some 40 young musicians yearning for a career with one of the largest orchestras in the world, have been invited to take three weeks of internship under the tutelage of 25 members of the Vienna Philharmonic Orchestra, taking part in the rendition of works as part of the Salzburg Summer Festival.

The lessons are focused on chamber music, while the interns also take specialization seminars that prepare them for auditions. The perfect sounds of an orchestra are inextricably linked to each musician’s ability to hear the other instruments, to react to their rendition, and to adapt and become flexible. According to the philosophy of the Vienna Philharmonic Orchestra, this is best taught through chamber music.

The Cypriot pianist graduated with honours from the Ferenc Liszt University of Music of Budapest, and holds a postgraduate degree in Music Performance from the Cleveland Institute of Music in the USA. He has appeared at major venues, such as the Wigmore Hall, the Brahms-Saal at Musikverein in Vienna, the Beethoven-Haus in Bonn, as well as at the majestic Franz Liszt Music Academy in Budapest. He is often invited to international festivals across Europe, and has made a number of appearances in world-famous orchestras.