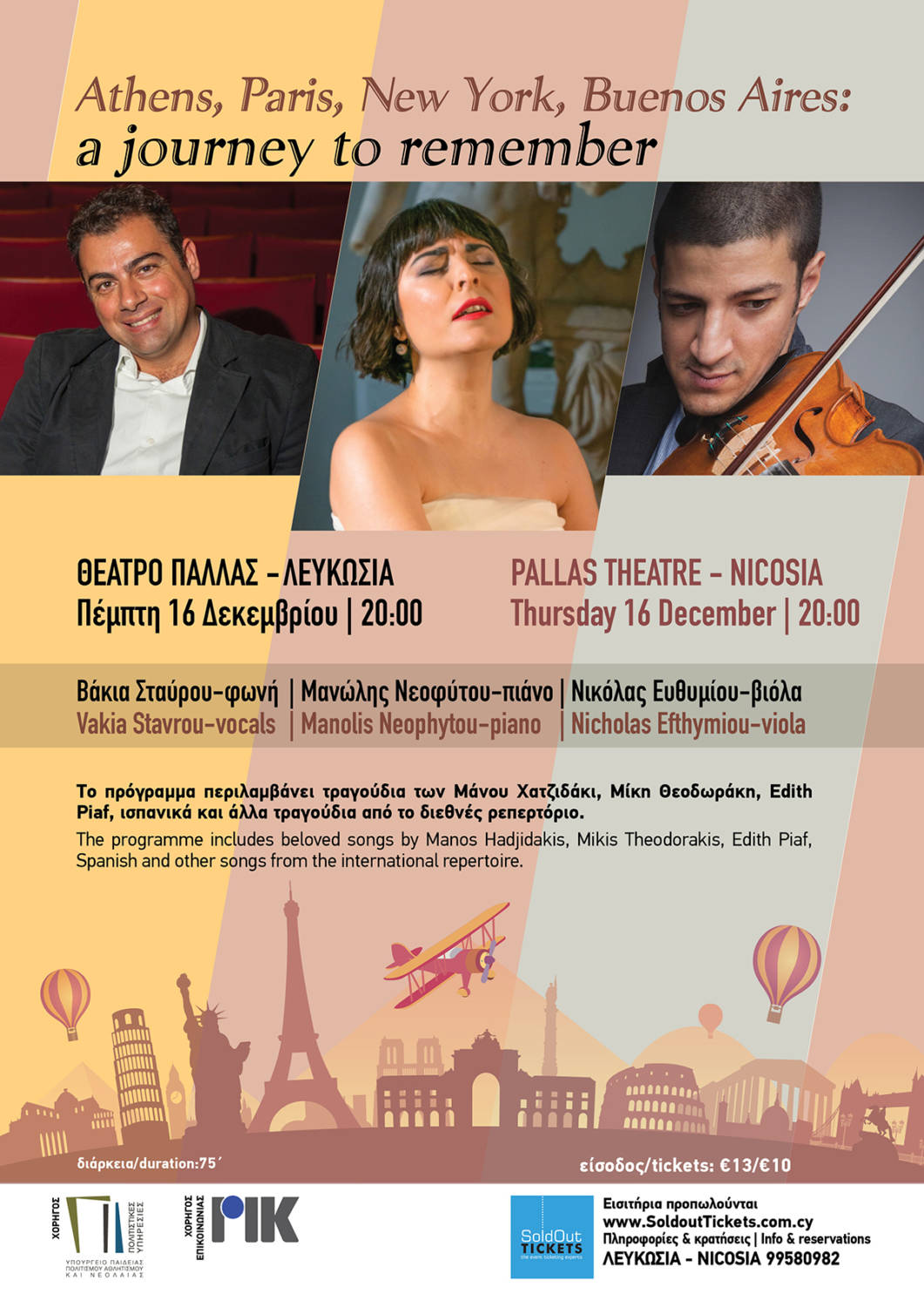 Vakia Stavrou, originally from Cyprus, is an internationally acclaimed singer and songwriter, based in Paris, France. After finishing her music studies at the Prague Conservatory, she pursued a career in the music industry and has made an important debut after being signed by SONY Music in Athens, Greece.

Her own composition “SOZINHA” which she recorded in Portuguese, has rapidly become a major hit in Greece soon after the release of her first album and not long after, in many countries in Europe and Latin America. Her ability of writing and performing in many languages in such a perfection, is one of her strongest assets.

Vakia has already toured in many countries, presenting her work in various important music festivals and in various music halls and theatres . To mention a few : Festival Au Fil des Voix –PARIS, Mawazine Festival Rythms of the World – CASABLANCA, Klangvokal World Music Festival – DORTMUND, Barnasants Songwriters’s Festival, BARCELONA , Teatro Sao Luiz – LISBON, New Opera Theater – MOSCOW, Gasteig – MUNICH. She was also invited from the United Nations to perform in Geneva , Switzerland in 2016 in a prestigious gala concert in the Human Rights and Alliance of Civilization’s Chamber, accompanied by the Symphony Orchestra of Morocco.

Her latest album “ALASIA” ( 2017) produced by the French Label “Accords Croises” in Paris, features her identity as a songwriter with her own compositions , written in three languages. The well known Portuguese writer and poet, Jose Luis PEIXOTO ( Nomitated with the Jose Saramago Award ) has contributed in this album by writing especially for Vakia, two poems that successfully, she turned into songs.

Vakia has described by the International Press as “ a breathtaking voice that moves the audiences at once” or even “ a highly sophisticated and enchanting artist, that makes one hear the vast beauty of her voice” [ Bertrand Dicale , France Culture ] Her ongoing projects include an upcoming recording of her new album in Paris and concerts all over Europe.

Manolis Neophytou performed his first solo recital at the age of eleven, just before he entered the Moscow’s Central Special State Music School of the ex-Soviet Union, where he studied for eight years with Professor Rudolf Kehrer.

Homage to Greek Music is the title of his first CD album and received a very good review from Mikis Theodorakis. He has also written music for the documentary film by Alessia de Ninno, which received a prize from the NFT (National Film Theatre) of London.

He is teaching piano in Arte Academy of Music, European University of Cyprus and State Music Schools in Cyprus.

Being attracted to the game of sound from a very early age Nikolas Efthymiou found in the viola an inexhaustible pool of possibilities to form and transform his dreams. He started studying the violin with Cypriot violinist Andreas Nikolaou at Cyprus Odeon and Trinity College which he concluded at the age of 14. Further studies were undertaken in Germany on violin and viola with Stelios Kafantaris, M.Speerman, Frank Strauch, and John Kinsella. During his studies in Hochschule fuer Musik Weimar he particpated in Hochschulorchester Weimar and cooperated with Weimar Staatscapelle, and Jenaer Philarmonie. Solo recitals in Spain, Germany, France, Serbia, Greece and Cyprus. He has also taken part in several music workshops and festivals like Bad Sobernheim Musik academy, Weimar Sommerakademie, Apple Hill Center for Chamber Music, Detmold Musikhochschule – Meisterkurse and he studied in the classes of known musicians like T.Zehetmair, V.Klimov, T.Brandis, W.Christ, E.Krueger,Cr. Euler, L.Matczynsky. In 2007 Nikolas Efthymiou forms the experimental ‘’Ensemble Casual’’ which seeks to bridge several music periods and styles ranging from Baroque to Tango and Jazz. He has participated as a soloist or as chamber music musician in prestigious festivals in Cyprus like Cypria, Paphos2017, Faneromeni ans others. Nikolas Efthymiou is active as Pedagogue in Cyprus University’s Music Advancement Program, in Youth Orchestra’s scholarship program for young soloist, as well as in Music-Gymnasiums/Lyceums.