According to TripAdvisor these are the best things to do in Cyprus this year.
Travellers are reviewing these activities and attractions as the next best things to experience on the island.

Located in the popular tourist resort of Protaras in the popular holiday town of Paralimni, the popular beach of Protaras – better known as Fig Tree Bay – boasts fine, golden sands and crystal-clear waters. It takes its name from a single, solitary fig tree that has been there since the 17th century.
Facilities on the beach include toilets, changing rooms, sun beds, umbrellas and water sports facilities, whilst the general area has a variety of accommodation, restaurants and kiosks.

Aphrodite’s Rock Brewing Company is a small craft brewery nestled amongst the beautiful hills of Paphos on the west coast of Cyprus.
Cyprus is a deeply historic island where modern travellers can retrace the footsteps of figures as diverse and interesting as Saint Paul, Alexander the Great and even Leonardo da Vinci.
Cyprus is a place of great historical importance in brewing. Less than 10km from our brewery are the 3,500 year old bronze-age remains of an ancient traditional brewery which would have been tended by the wives of the Cypriot nomadic hunter-gatherers of the time.
They now continue that same noble tradition here in Cyprus and are committed to brewing our handcrafted beers in small personally-tended batches using mineral-rich spring water from our own well. We deliver these to you fresh and in the peak of condition for an uncompromising taste experience. 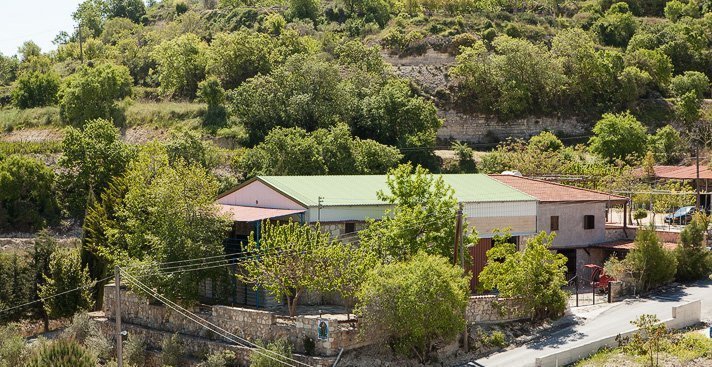 Located in the Lemesos (Limassol) district, the pretty, wine producing village of Omodos sits at an altitude of 800 metres on the Troodos mountain range, in the beautiful area of ‘Krassohoria’, just 42 km from Lemesos town. The village can be reached by following the E601 route, or by following the B8 route, then the E802 route and thereafter, the F825 route. Omodos is one of the most traditional and charming villages on the island.
The village has existed since the Frankish period and is marked as ‘Homodos’, and ‘Homoclos’ on old maps, with its name originating from the Greek word for street – ‘odos’.
Famous for its wine, Zivania spirit, handmade narrow-knit lacing and ‘arkatena’ bread, its quaint environs are perfect for agrotourism.
Despite its small size, Omodos has many interesting sights. Located within close proximity of one another are the cobbled square, old stone-built houses, local wineries, a Medieval wine press and the monastery of Timios Stavros (Holy Cross), with its old icons and impressive woodcarvings. There is also a museum dedicated to the National Liberation Struggle, as well as a centre for the preservation of narrow-knit lacing, and an Icon Museum.
Every September 14, the village holds one of the biggest religious fairs on the island, dedicated to the Holy Cross. The celebration lasts for three days, and vendors gather in the beautiful square in front of the monastery to sell their wares. The square is also the scene of many other events during the summer and Easter. 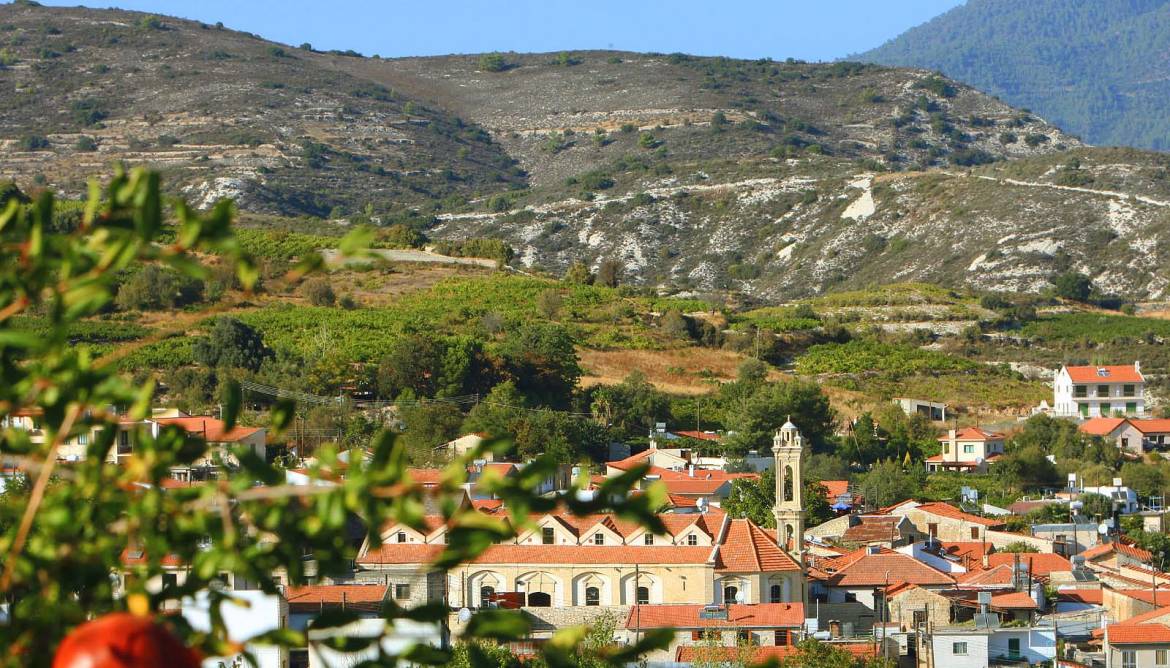 Situated 4 km east of the centre of the popular resort of Agia Napa – on the road between Cape Gkreko and Protaras – the 200-metre long beach of Konnos is one of the most picturesque on the island.
The last beach delineating the boundaries between Agia Napa and Paralimni, Konnos is small and idyllic, and covered in fine golden sand. Its calm and crystal clear seawaters are sheltered from heavy winds.
Facilities on the beach include toilets, changing rooms, sun beds, umbrellas, a beach bar with music, and water sports facilities. There is also a transit point for small boats as the adjacent beaches provide bays for anchoring boats and diving. There are high-end hotels overlooking the beach, and restaurants and convenience stores nearby.
The path towards the beach takes you through pine trees and greenery, whilst the view from the top is truly breathtaking. The beach offers access to all that the National Forest Park – which is on the Natura 2000 network of European protected sites – offers, including hiking and diving.

The archaeological remains of Kourion – which was one of the island’s most important city-kingdoms in antiquity – are of the most impressive on the island, and excavations have unearthed many significant finds, which can be viewed at the site.
The city-kingdom was built on the hills of the area, and overlooked and controlled the fertile valley of the river Kouris. According to archaeological finds, evidence suggests that Kourion was associated with the Greek legend of Argos of Peloponnese, and that its inhabitants believed they were descendents of Argean immigrants. The once-flourishing kingdom was eventually destroyed in a severe earthquake in 365 AD.
The magnificent Greco-Roman theatre – the site’s centrepiece – was built in the 2nd century BC and extended in the 2nd century AD. The theatre has been restored, and is now used for open-air musical and theatrical performances – mainly during the summer months – making it one of the most popular settings for high-calibre cultural events.
East of the theatre are the remains of a prominent building, the ‘House of Eustolios’, which was originally a private villa that was turned into a public recreation centre during the Early Christian period.
Whilst the villa was modest in size, it was well equipped and richly adorned. Its remains consist of four panels of beautiful, 5th century mosaic floors in the central room, and a bathing complex that is located on a higher level, accessed by steps, north of the building. A roof structure allows visitors to enjoy the site all year round, and explore its remnants.
The baths themselves originally opened off the central room to the north and east, where there were cold baths (frigidarium). Before each is a shallow foot-bath; while on the west, the remains of the hypocausts – which heated the medium room (tepidarium), and the hot room (caldarium) – can be seen. In the latter, the built-in basins for hot baths have survived, as have the firing chambers, where hot air was carried through the hypocausts, travelling up through specially-cut flues, through the walls, and beneath the terracotta tiles of the floor.
Along with the House of Eustolios, there are further impressive mosaic floors in the ‘House of Achilles’ and the ‘House of the Gladiators’, with the villas named after the scenes depicted on the mosaics.
The remains of the Roman Agora are also visible at the site. The structure dates back to the early 3rd century, with additions made later on, during the Early Christian period. The Roman Agora is built on the remains of an earlier public building, which was in use from the end of the 4th century to the end of Hellenistic period.
The Agora of the city is surrounded by porticos with marble columns on both sides, whilst on its northwest side, is an impressive public bath and a small temple, the Nymphaeum, dedicated to the water nymphs.
An early Christian basilica at the site dates back to the 5th century, with separate baptistery on the external northern side.

Located about 9km north of Pafos (Paphos), the monastery of Agios Neophytos was founded by the Cypriot recluse and writer Neophytos in the second half of the 12th century, in what used to be a secluded location at the head of the picturesque valley.
The hermit carved a cave out of the mountains called the ‘Enkleistra’, which is covered with some of the finest examples of Byzantine frescoes that date back from the 12th to the 15th centuries. The monastery has a noteworthy ecclesiastical museum and its later church also contains some of the finest Post-Byzantine icons dating to the 16th century.

The Byzantine type church of Prophet Elias was built in 1984, in the place of an older chapel. Set on a 100m high granite hill and found in a short distance from the heart of Protaras, it certainly cannot be missed. It was built using stones of the area and it is in perfect harmony with its natural surroundings. The chapel is especially awe-inspiring in the evenings when it is floodlit.

Located 5 km from the centre of the popular tourist resort of Agia Napa, the 350-metre long beach of Makronisos is actually a picturesque cluster of three bays, stretching from the well-sheltered Makronisos Beach.
With fine, golden sands and relatively calm, crystal clear seawaters, the small bays extend in different directions; out to the west, the southwest and the southeast. The southwestern part is within a special protected area of the Natura 2000 network.
Facilities on the beach include toilets, changing rooms, sun beds, umbrellas and water sports facilities, whilst there is a convenience store located close by. The general area also has a variety of restaurants and kiosks. 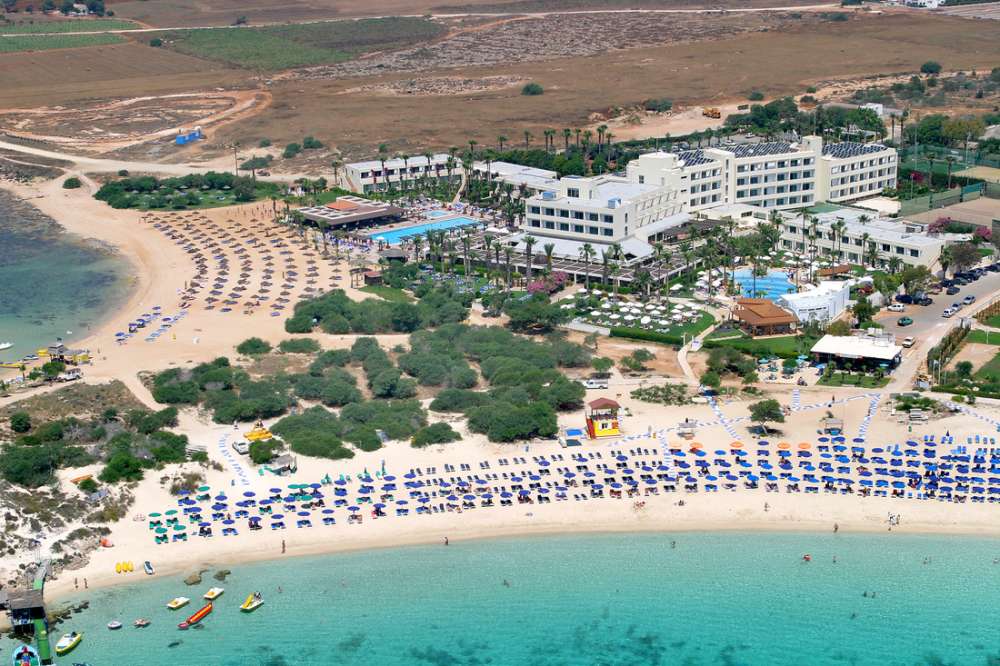 The House of Dionysus

The mosaic decorations and the mythological compositions are the main characteristics of this restored Roman villa, dating back to the second century A.D. The name “House of Dionysus” is mainly due to the many representations of Dionysus, the god of wine. The house most probably belonged to a member of the ruling Roman class or to a wealthy citizen of Paphos. 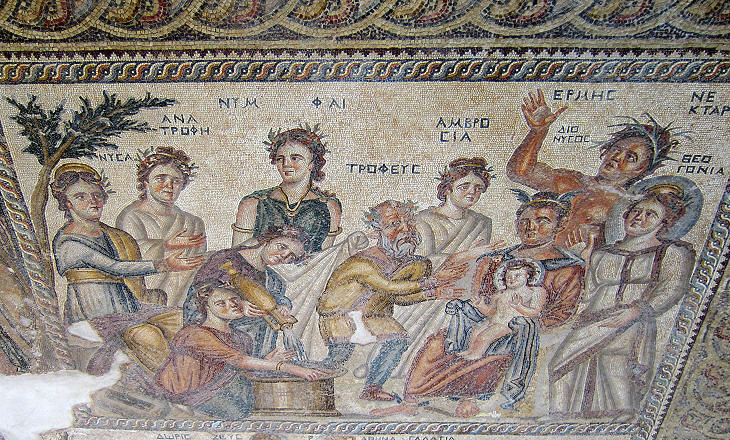 Re Milonga: Tango in Limassol on July 24