Things are going smoothly, Spehar says ahead of leaders’ meeting 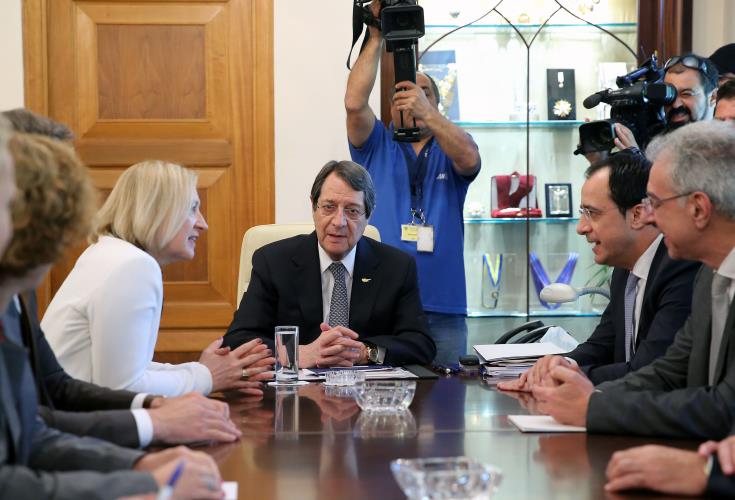 Things are going smoothly and the UN looks forward to hosting both leaders, UN Secretary General’s Special Representative and Deputy Special Adviser on Cyprus Elizabeth Spehar has said ahead of a dinner between Cyprus President Nicos Anastasiades and Turkish Cypriot leader Mustafa Akinci, on Monday.

The dinner provides the first opportunity for Anastasiades and Akinci to meet since a Conference on Cyprus, at the Swiss resort of Crans Montana, ended inconclusively last July.

“I have had a good meeting with Mr Anastasiades and with his colleagues,” Spehar said after having been received by President Anastasiades at the Presidential Palace, today.

She added that “the nature of this discussion was about the dinner, the informal meeting that we will be having on Monday evening, so we are talking about the preparations for that.”

This, she explained, “follows the meeting I had with Mr Akinci earlier in the week to do the same thing, also to talk about preparations.”

“Things are going smoothly so far and I look forward to hosting both of the leaders on Monday evening at my Chief of Mission residence in the buffer zone,” Spehar noted.

The UN official also pointed out that “this will be the first time that they will sit down with each other and speak in a number of months.”

Replying to a question as to the agenda of the dinner, she explained that “it is up to the two leaders what they will discuss, there is an open agenda,” adding that “we will leave it up to them.”

In the meantime, sources have said that Spehar conveyed a request by Akinci for no media coverage during the dinner.

By In Cyprus
Previous articlePhotiou highlights role of Cyprus, Greece and Egypt while discussing preparations of “Nostos” in Athens
Next articleTraditional Loukoumades