There is difference in the two sides’ positions in divided Cyprus, President says 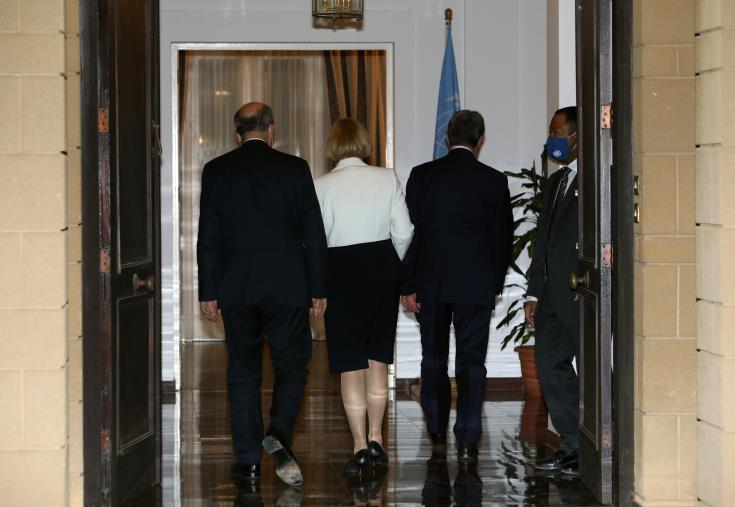 New Turkish Cypriot leader Ersin Tatar proposed the discussion of other forms of solution to the Cyprus problem, Cyprus President Nicos Anastasiades has said before adding that “undoubtedly there is a difference in (our) positions.”

The statements were made upon his return to the Presidential Palace late on Tuesday from a first informal meeting with Tatar under the auspices of the UNSG’s Special Representative in Cyprus Elizabeth Spehar.

“I insisted that what needs to be discussed is how to reunify the country and the prospects for the future and on his part he insisted that after so many years we should also see other forms of a solution,” Anastasiades told journalists.

“What is important is to have the necessary preparation so that the UN Secretary General can be able to convene an informal five-part meeting so that we can see where we are at,” he added.

The President also said that he expressed his determination to take part in a new five-party meeting, in accordance with a letter the UNSG sent recently to both himself and Tatar so that discussion take place on the basis of the UN resolutions, on the basis of a bi-communal, bi-zonal federation.

“Tatar said he was willing to take part in an informal five-party meeting but noted that more ideas should be put forward at the negotiating table,” Anastasiades said.

Asked if the UNSG`s special envoy Jane Holl Lute is expected to visit Cyprus, the President said that this will depend on the Secretary General.

Varosha, the fenced off section of the Turkish occupied town of Famagusta, is often described as a ‘ghost town’. UN Security Council resolution 550 (1984) considers any attempts to settle any part of Varosha by people other than its inhabitants as inadmissible and calls for the transfer of this area to the administration of the UN.