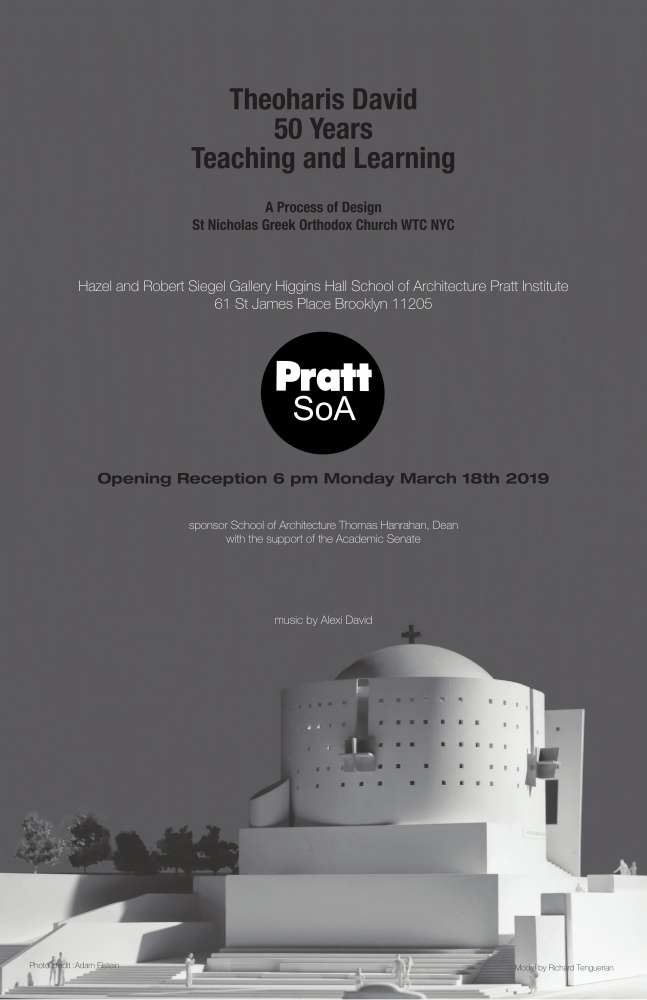 This exhibit aspires to communicate through primarily one specific project, the personal process of design of an architect / educator and to underline in the digital age the value of the act and art of drawing as a method of architectural design and a medium for representation.

The over 40 original drawings being shown and created between 2012 and 2015, demonstrate a process initiated by conceptual sketches which are then further developed as a continuation of a personal process of design. These drawings are not meant to be considered as standalone works of art or accepted as finished, but as evidence of an ongoing process of exploration, correction, and experimentation. They are meant to offer visual evidence of architectural design explorations inspired by the provocation of the design challenge, a Greek Orthodox Church within the WTC Ground Zero memorial site.

The visitors are asked looking at the drawings, to consider that it is when the architect puts pencil to paper, that a critical moment of architectural creation begins. Also that it is the intelligence indicated in that initial act of drawing reflecting building technology, spatial concepts and environmental transformations, which will determine the quality of the result.

They are invited to consider how the initial concept drawings along with subsequent design studies, and which address a broad range of architectural challenges, compare with those produced for a presentation.

This exhibit is sponsored by the School of Architecture with the support of the Academic Senate of Pratt Institute.

By In Cyprus
Previous articleGas revenues not to be used to pay back public debt
Next articleRoad tax renewals still pending for 317,000 vehicles

Pop-Up Art Show: Exhibition on May 12

“Journey with Paints” Exhibition Opening on May 18