The world does not seem to have borders from space, says astronaut Anna Lee Fisher 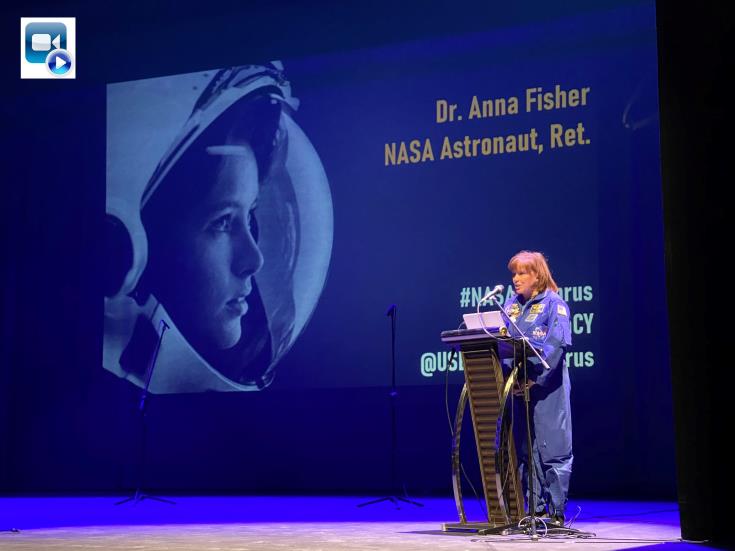 Once you get into space you don’t see borders and you really start to think of yourself as a citizen of this planet, said astronaut Anna Lee Fisher, describing how the space programme has been bringing people together ever since Neil Armstrong set foot on the moon.

Fisher, who retired in 2017 after working for three decades for NASA, is one of the first six women to take part in the space programme and the first mother in space. She is visiting Cyprus on the occasion of the 50th anniversary since the Apollo 11 mission to the moon and addressed on Thursday evening an event organised by the Cyprus Space Exploration Organisation and the US Embassy in Cyprus, at the Nicosia Municipal Theatre.

The astronaut – whose picture by photographer John Bryson became iconic inspiring imagery in moves like Aliens, and even appearing in the video “Rocket Man” of Kate Bush – worked for the Space Shuttle programme and was later involved in the initial phase of development of the International Space Station (ISS). Fisher also worked in the development of imaging for the Orion capsule, a spaceship that is expected to bring about a new era in space exploration.

Addressing the audience, Fisher said that she loved mathematics and studied chemistry and medicine. Her involvement with NASA happened “by accident”, when she heard from friends that the space agency was looking for astronauts. She submitted her application one day before the deadline and thought that becoming an astronaut was not a very realistic goal.

Shortly after she was called for an interview and was recruited to the space shuttle programme. Two weeks before giving birth to her first daughter, she was assigned to the STS-51A mission, with the second flight of Space Shuttle Discovery.

As part of a five-member crew she went to space from November 8 to 16, 1984, recording a total of 192 hours. She recalls customs officers asking the crew if they had something to declare after landing back to the Kennedy Space Center.

From 2011 NASA stopped sending astronauts to ISS from its own soil and depends for this on Russia. “This is the reason why many astronauts have to learn Russian” she said and noted that the US aims to develop its own space vehicle.

Boeing Starliner and SpaceX Dragon are developing vehicles that are scheduled to bring astronauts to the ISS by next year. NASA is also developing its space capsule “Orion” which aims to bring Americans back to the moon. “President Trump wants us to go to the moon and we hope to build a base there, like the one in Antarctica” the astronaut said. She noted that the goal is to go to Mars and build a base there, with Fisher hopping that this could happen by 2030.

The next 100 years will be exciting, I wish I could start again and have a second career with NASA, Fisher concluded.

Transport Minister Yiannis Karousos also attended the event. Addressing the audience, US Ambassador Judith Garber said that even after 50 years, we are still inspired by the incredible achievement of putting a human being on the moon. “The Apollo 11 mission was not just a success for America, but for the global community” the Ambassador noted.

She added that the moon landing is often described as one of humankind’s greatest achievements and “shows us what humanity can accomplish when we work together.”

Referring to future US plans, Garber said that President Trump has pledged to launch a new era of discovery and exploration of the universe, challenging NASA to lead the return of Americans to the moon and send the first Americans to Mars.

“It may sound incredible now, but, just as we chose to go to the moon over 50 years ago, we are now choosing to enter a new era of space exploration” she noted.

CSEO President George Danos said that today we are celebrating the day that humanity broke out of its cradle and placed the first human on the moon, capturing the attention of the entire world and making the dream of visionaries a reality.

During the event, the 2018 and 2019 winning teams of the NASA Space Apps Challenge were honoured. Participants also had the chance to hear Athena Vourgos performed the aria L’Ho Perduta from Mozart’s opera ‘Le nozze di Figaro’. Members of the Limassol Cyprus Operatic Stage Choir, under the direction of soprano Ioli Mousteri, sang together with tenor Marios Andreou the closing arias ‘Brindisi’ from Verdi’s opera ‘La Traviata’ accompanied on the piano by Maria Lambraki.

The event was possible with the support of the Municipality of Nicosia, with Space Systems Solutions (S3) Ltd as sponsor and the Cyprus News Agency as media sponsor.
(Cyrus News Agency)