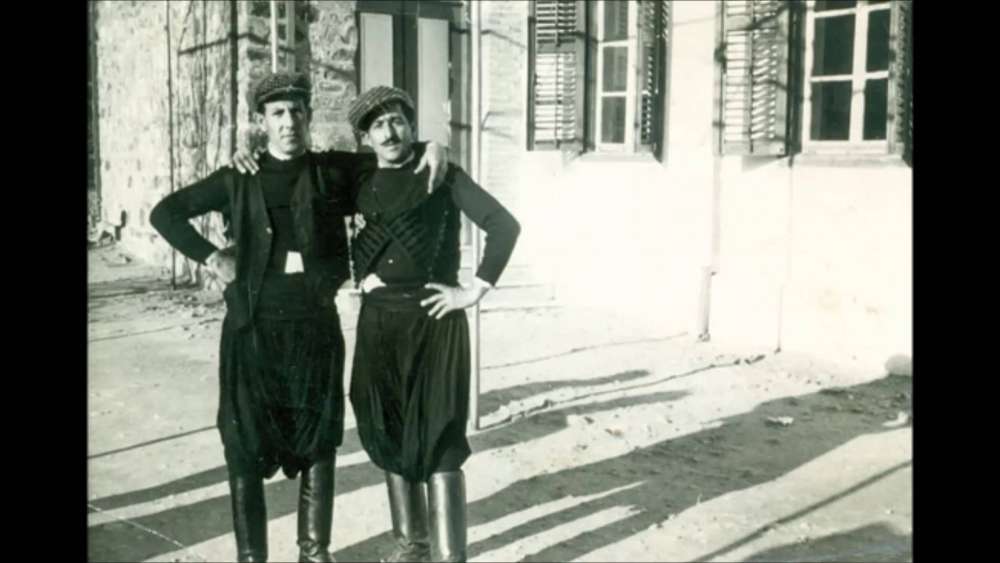 The dying of the “vraka” had many stages and its preparation lasted approximately one week.

The first step of the whole process was the washing of the fabric and then the dyer took a piece of wooden slab the so called “faouta” and hit the vraka in order to open its fibres, which would absorb the water easily. The water would clean the dust and the color.

The “vrakes” were put in big cauldrons, which were full of extracts of roses, and they remained there for two hours. Later on and after they were well boiled, the “vrakes” were transferred in a vessel called “taarin”. The “vrakes” remained in this vessel for one night (8 to 12 hours).

The next morning the “vrakes” were washed and then they were exposed to the sun until they were completely dry. The dyer put a number on each “vraka” in order to know the name of the owner. The same night they were put for one more time in the “pithari” where ferrous sulphate was added. Thus, the “vrakes” got a grey color. This process was repeated 2 or 3 times and the dyer added rose water which offered to the clothes their black color. Every time they put the “vrakes” in the “pithari” with the mixture of ferrous sulphate and rose water, the “vrakes” got a darker shade of black.

After the above procedure, the “vrakes” were squeezed until all the water came out. Then they were washed for one more time, hit them and then they were exposed to the sun. The color should be steady so that it won’t come out.

The cost for the dying was estimated according to the weight of the “vraka”. The inhabitants of Linou, usually bought “vrakes” during Christmas and Easter. The economic status of the villagers was shown from the quantity of their clothes.

During the 50’s, the fashion has changed and defined the use of pants. Thus, the profession of the dyer was gradually abandoned.