The story behind the looted Agios Anastasios Royal Doors 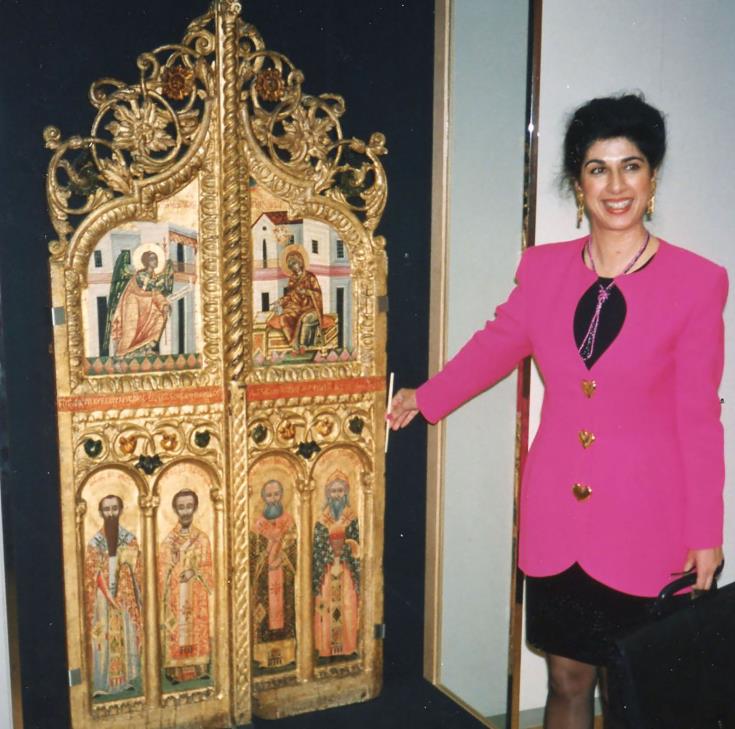 The Royal iconostasis doors of Agios Anastasios in the Turkish occupied Peristeronopigi village,  looted after the Turkish invasion of Cyprus in 1974,  are the first artefact repatriated from an Asian country, namely Japan.

The repatriation was announced last week and it was possible after extensive efforts that intensified in the last two years.

But little is known about the story of how the Royal Doors were able to return home, a story that dates back to the 1990s when they were first spotted at a Gallery in the Netherlands by Tasoula Hadjitofi, then Honorary Consul of Cyprus, and renowned internationally for her work on repatriating stolen artifacts in the early 1980s.

Often called ‘’Icon Hunter’’ Hadjitofi is best known for orchestrating the “Munich Case”, one of the largest art trafficking operations in Europe which led to the arrest of the Turkish art smuggler Aydin Dikmen and the confiscation of over $60 million` worth of looted artifacts from Cyprus and around the world.

Cyprus News Agency contacted Hadjitofi and learned the story behind the Doors, her exhaustive efforts which include visits to Japan, exchange of letters, hiring of private detectives, a press campaign in Japan and around the world and rigorous actions for the stolen art to return home.

Royal Doors spotted at a Galley in the Hague

In an interview with the Cyprus News Agency Hadjitofi told us that the Royal Doors left Cyprus between 1974 and 1980 as they were exhibited in Wijnburg, Holland, an exhibition which eventually went bankrupt.

“The documents of the bankruptcy were secured by myself in the late 80’s, after hiring a private detective with my own money. In the bankruptcy documents there were pictures of the Royal Doors which Mr. Thanasis Papageorgiou, then Director of  the Department of Antiquities recognized and confirmed their provenance. Cyprus could not take action then as the whereabouts of the Royal Doors were needed before any legal action could have taken place in Holland”, she tells CNA.

In 1991 whilst walking at the street Hadjitofi saw the doors in a window at the Roozemond Gallery in the Hague and sent somebody to take a picture for Mr. Papageorgiou to confirm if those were the Peristeronopiyi Doors.

“Those days we did not have internet and we worked using a fax machine. Pictures had to be sent by mail and authenticated by notary. Once Papageorgiou confirmed that these were the Royal Doors of Peristeronopiyi, I confronted Robert Roozemond , the owner of the Gallery and requested the Doors verbally and in writing, on behalf of Cyprus. He claimed the Doors belonged to a client and confidentiality and privacy did not allow him to reveal his/her name”, she describes.

According to Hadjitofi, what we did know though from the documents of the receiver is that they were bought from Michel van Rijn and Aydin Dikmen. She explains that these documents were vital as we now had evidence that Dikmen and Roozemond were working together, something that Roozemond denied particularly now that he had a gallery next to the Royal Palace in The Hague.

Hadjitofi then requested the Attorney’s office to send over a representative to assist with the case however in the meantime, the Royal Doors vanished from the shop window.

“So once again, Cyprus could not take legal action. Roozemond requested the Cyprus Archbishop to send a more senior diplomat as he did not like to have discussions with me but the Archbishop responded  with full backing me,” she said.

A trip to Japan – the Kanazawa College of Art

Unfolding the details of the story, Hadjitofi tells us that in 1996 van Rijn demanded a power of attorney from her to negotiate on her behalf the Royal Doors, which she refused. They settled that if she would go to Japan with him, he would show her where the Doors were.

“I changed my tickets and flew to Osaka with my husband for a week and met van Rijn who told us that the Doors are in the Kanazawa College of Art. I had meetings with the lawyers of the College and took the train to actually see the Royal Doors which were in the museum part of the College. The College’s staff and the lawyers explained that the Royal Doors were bought with tax money and from a legitimate gallery in The Hague so how could they have known the Doors were looted. They questioned the records of the Cyprus Antiquities Department which were hand written and with no pictures attached and they wanted much more evidence and pictures of the Doors in the Church, which we did not have”, she said.

Hadjitofi told us that Archbishop Chrysostomos the First, sent a power of attorney to her in Japan, authorizing her to appoint lawyers to advise the Church. She also requested a meeting with the Mayor of the city who could not see her.

The press campaign – Walk of Truth

“I then began a media campaign with Asahi Shimbun (Japanese Daily), the Dutch press, Greek media, the Independent etc. In parallel I worked closely with Dinos Leventis in London to mobilize UNESCO and anyone who could help bring the Doors back to Cyprus, without money.  Former Cyprus President Vasiliou even offered to have a contact via his company KEMA to speak to them in Japanese but the College could not justify spending tax payers money to buy looted art so, they insisted that they can only give them back the money they used to buy them” she tells us.

Hadjitofi and the Archbishop refused to fuel the trade which they consider unethical and turned to the lawyers who explained that such a civil case would have taken around ten years of legal fees and with uncertain outcome given the poor quality of evidence in Cyprus.  The case was also covered in the Dutch media and had the interest of UNESCO.

In 1999 when Hadjitofi was no longer Honorary Consul, the College in Kanazawa refused to respond to her letters as they did not consider her an official anymore. Former Archbishop wrote to them that she is the representative of the Church, but they would not recognize the Church either.

According to her story, Hadjitofi then turned to the Japanese television and convinced a producer to make a documentary about looted antiquities of Cyprus and speak about the Royal Doors as a pressure for the College to give back the Doors to the people of Cyprus.

“The documentary was a big success and won an award in Japan so the climate was right for negotiations. But as I was no longer the Consul, the Embassy of Cyprus in the Netherlands took negotiations with the College over but the Japanese insisted they had to get the tax money spent back’’, she noted.

Between 2002 and 2011 things were quiet till 2012 when Walk of Truth was established and Hadjitofi’s archives were now available to researchers and academics worldwide.  The Royal Doors were discussed in universities and also in her speeches plus a detailed account of the history of the Doors, with names etc  is found in her book, “The Icon Hunter”, with Kathy Barrette published in English 2017 and Greek 2019.

Hadjitofi told the Cyprus News Agency that early in 2020 Bishop Vassilios of Constantia informed her that the Director of Antiquities was negotiating with the College to buy back the Doors with money from the Archbishopric.

“I suggested that the Government should never engage in negotiations involving public money to buy back looted art and neither should the Church. If the Bishop and the Department of Antiquities would agree to collaborate with Walk of Truth, I told them that the foundation would then find a sponsor, given all legal routes were exhausted and provide a united front towards the Japanese and the outside world.

“The Bishop explained that the Department of Antiquities will buy the Royal Doors back with money from the Archbishop and that although he respects my efforts, he does not want to have conflicts with the Antiquities Director” she told Cyprus News Agency.

Head of the Office for Combating Illegal Possession and Trafficking of Antiquities at Cyprus Police Headquarters, Michalis Gavrielides, told the CNA last week that the strengthening of relations between Cyprus and Japan, with the opening of an embassy of Japan in Nicosia and an embassy of Cyprus in Tokyo, played a catalytic role in the outcome of this case.

The Ambassador of Cyprus to Japan, Charis Moritsis, told CNA that the Embassy of the Republic in Tokyo was involved in this case since 2019 when it began operating and they had an excellent cooperation with the Antiquities Department. The efforts, he said, reached a conclusion with the appropriate discretion and effectiveness.

Τhe Royal Doors by the hand of the Monk Philaretos were completed in 1775. They are of pine wood, adorned with richly illuminated religious panels, and form the center of the Iconostasis, the icon-decorated screen that separates the sanctuary from the rest of Greek Orthodox church interiors.

The Cypriot iconographic tradition of the 18th century, is different from the rest of the Orthodox world, of which they are an important example. During this period, the upper part of iconostasis doors were usually decorated with representations of the Annunciation, while the lower parts were often decorated with representations of the Three Hierarchs and occasionally, with a Cypriot saint, Agios Spyridonas in this case.

The Royal iconostasis Doors will be conserved by the Department of Antiquities and will be handed over to the Holy Archbishopric of Cyprus, until their return to the church of Agios Anastasios, where they belong, is made possible.