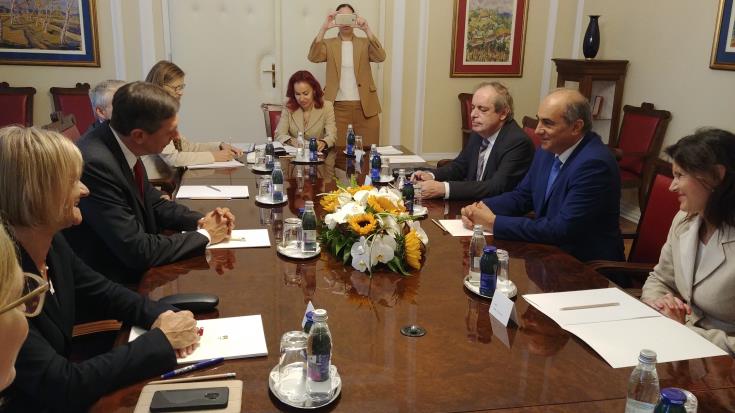 The European Union should proceed from words to actions concerning Turkish provocations, Demetris Syllouris, President of the Cyprus Parliament told his Slovenian interlocutors during contacts in Ljubljana, where he is paying an official visit.

Syllouris on Wednesday met with Slovenian Prime Minister Marjan Sarec and the head of state Borut Pahor, with whom he discussed the Cyprus problem and the recent Turkish provocations, bilaterall relations and economic ties, as well as the initiative he discussed yesterday with the Slovenian National Assembly President concerning the creation of a coordination mechanism among small states of Europe aiming to promote the EU principles and values and the implementation of the rule of law.

In statements to Cypriot press, Syllouris said he conveyed to the Slovenian President Nicosia’s satisfaction over the EU’s measures regarding the illegal Turkish drilling activities in the Cypriot exclusive economic zone which fall short of taking sanctions against Turkish companies, “but also our disappointment to a large extend because these measures are taken with a slow pace to a very small degree compared with other cases such as Ukraine.”

Replying to a comment over Slovenia’s position on Turkey’s intentions to open the fenced-off area of occupied Famagusta (Varosha), Syllouris said Slovenia supports the Cypriot positions as a matter of principle but added “we should not disregard potential pressures.”

“This is why we explained to the Slovenian President and other officials I met with here that there is a relative disappointment regarding support (to Cyprus) which should proceed from words to actions to be more effective,” he added.

“There are prospects in tourism, services, transport, trade in agricultural products and new technology,” the Cypriot House President added.

Syllouris will later hold a joint meeting with the President of the Slovenian parliamentary committees on Foreign and EU relations and the parliamentary Cyprus – Slovenia friendship group. He will also attend the opening of an event dedicated to the Slovenian Constitution.

He will return to Cyprus tomorrow.