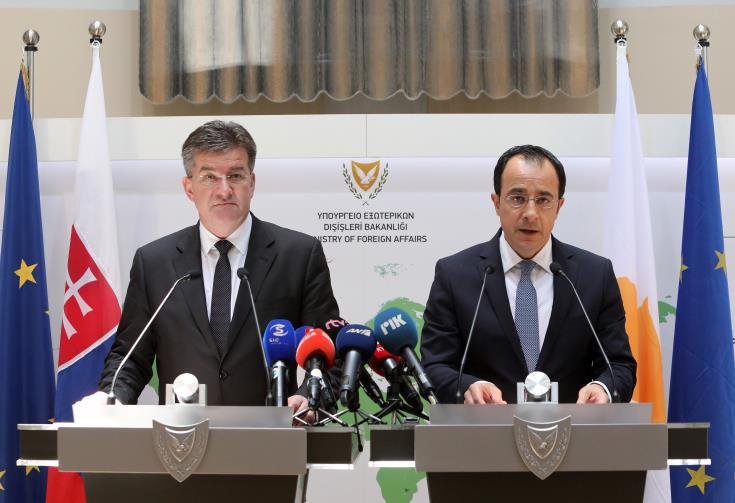 The current status quo is unsustainable, said Minister of Foreign and European Affairs of the Slovak Republic, Miroslav Lajčák and urged the international community not to allow a solution beyond the framework set by the UNSC resolutions and the UN Security Council proposals.

On his part, Cyprus’ Foreign Minister Nikos Christodoulides said regarding Turkey’s illegal activities in the EEZ of Cyprus, that he briefed the Slovakian FM on “the latest developments, sharing with him some new information”.

In his remarks, Lajčák said that Cyprus is a country of great strategic and geopolitical importance in the eastern Mediterranean region, noting the trilateral cooperation it maintains with Arab countries in the region which contributes to strengthen the regional security and stability and economic prosperity.

Referring to Slovakia, he said it is well known in Cyprus due to its longstanding commitment in finding a peaceful solution to the Cyprus problem.

Lajčák referred to the bicommunal meetings between Greek Cypriot and Turkish Cypriot political parties at Ledra Palace in Nicosia’s buffer zone that aim to “to build trust and respect between the two communities.”

This year, he said, Slovakia marks 30 years of dialogue between the Greek Cypriot and Turkish Cypriot political parties in service of peace in Cyprus. Lajčák referred to the 18-year-old presence of Slovakia’s armed forces here in Cyprus within UNFICYP, noting it is now the lead nation in the 4th Sector of the buffer zone.

When it comes to a solution to the Cyprus problem, said the Slovakian FM, “we believe that the consultations led by Jane Hοll Lute, the UNSG’s personal envoy with the two leaders of the two communities as well as the guarantor powers and the EU as an observer will continue to find a consensus on so-called terms of reference framework which is a prerequisite for the resumption of the peace talks”.

“The current status quo is unsustainable”, he remarked, adding that this does not mean that the only alternative is the permanent division of the island. “The international community must not allow a solution beyond the framework set by the UNSC resolutions and the UN Security Council proposals”, said Lajčák.

He called for a unified independent and sovereign Cyprus and pledged that the Slovak diplomacy will continue to offer “its helping hand as an impartial mediator of the dialogue and also to support the peace through our presence in UNFICYP”.

The Cypriot FM said that exchanged views on bilateral relations and expressed his deep appreciation for Slovakia’s contribution to UNFICYP with a sizeable contingent over the past 18 years.

“Our partners` contribution towards maintaining peace and stability on the island, whilst the Turkish military occupation and the forceful division persist, is vital — amongst other things — in fostering an environment within which meaningful negotiations for a solution to the Cyprus problem can take place”, he said.

He further expressed the Cyprus Government’s appreciation for Slovakia’s commitment and determination – over the last thirty years – to host under the auspices of its Ambassadors to Cyprus the meetings between Greek Cypriot and Turkish Cypriot political parties, facilitating the bi-communal dialogue.

Christodoulides said he briefed his colleague “extensively on the latest developments with regard to the Cyprus problem. I shared with him our strong commitment to the resumption of negotiations as soon as possible, with the aim of reaching a settlement on the basis of a bi-zonal, bi-communal federation— in line with EU Law, values and principles — that will reunite Cyprus ensuring that it remains a functional, effective EU Member State”.

However, he underlined that for “negotiations to resume however, we agreed with Miroslav that Turkey must of course stop first its illegal and provocative activities within the Exclusive Economic Zone of the Republic of Cyprus, which are in flagrant breach of International and European Law and the sovereign rights of the Republic”.

In relation to Turkey’s illegal activities in the EEZ of Cyprus, he briefed the Slovakian FM on “the latest developments, sharing with him some new information”, adding that praised Slovakia’s position for fully being in line with the relevant statement made by EU High Representative Federica Mogherini.

Christodoulides also said the deliberations touched upon a broad range of current issues of common interest and concern from their common European agenda and  discussed the priorities of Slovakia’s current Chairmanship of the OSCE. He also said that both Cyprus and Slovakia are bidding to host the European Labour Authority and expressed hoped that the best bid will win.