The cultural heritage of Chrysoroyiatissa Monastery is going digital 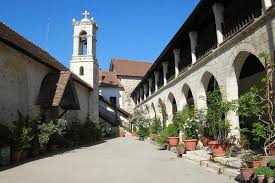 The Chrysoroyiatissa Monastery in Paphos district has signed a cooperation agreement with the Cyprus University of Technology (CUT) to digitise the former’s cultural treasures, that will first appear on the CUT’s digital collection Apsida and subsequently on the European digital library Europeana.

The digitisation, according to the head of CUT’s team on digital cultural heritage Dr Marinos Ioannides, concerns the monastery itself, like the monks’ cells, as well as the museum’s objects and the monastery’s archives.

The monastery’s abbott Archimandrite Pangratios told CNA that Dr Kyriakos Efstathiou, co-head of the project, is the former abbot’s nephew and loves the monastery, hence his decision to help make it digital.

He added that the digitisation is “very important because this heritage will be recorded, and it will help find some lost objects.”