The Barber of Seville at 20th Pafos Aphrodite Festival 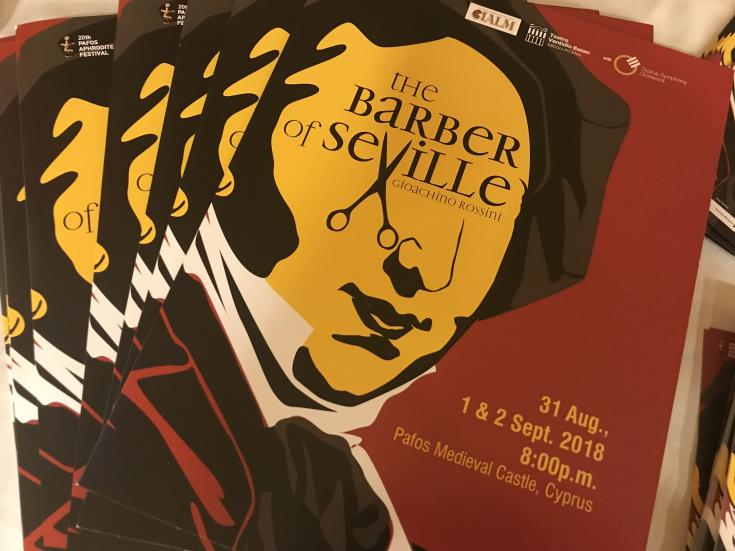 The famous opera will be presented on  Αugust 31 and September 1 and 2 at Paphos Mediaeval Castle. There will be a simultaneous translation in Greek, English and Russian via subtitles.

Rossini’s masterpiece is a production by the Italian organisation C.I.A.L.M. – Teatro Lirico Italiano in collaboration with the Ventidio Basso Ascoli Piceno Theatre and the participation of the Cyprus Symphony Orchestra.

A press conference was held on Tuesday in Nicosia, by the organizers, in order to present this year’s programme.

Il barbiere di Siviglia (The Barber of Seville) is an opera buffa in two acts with an Italian libretto by Cesare Sterbini. The libretto was based on Pierre Beaumarchais’s theatrical trilogy, Le Barbier de Séville (1775).

The première of Rossini’s opera (under the title Il barbiere di Siviglia, ossia L’ inutile precauzione – The barber of Seville or The useless precaution) took place on February 20,  1816 at the Teatro Argentina, in Rome.

According to a press release, it constitutes a masterpiece of the operatic repertoire with a joyful mood, bursting with lovely melodies and arias, vividness and musical improvisations.  Rossini completed the composition and orchestration of the opera as well in just 24 days, which is considered record time even for that era.

For more information the public may contact Pafos Aphrodite Festival Cyprus in Paphos on 26822218 and at www.pafc.com.cy