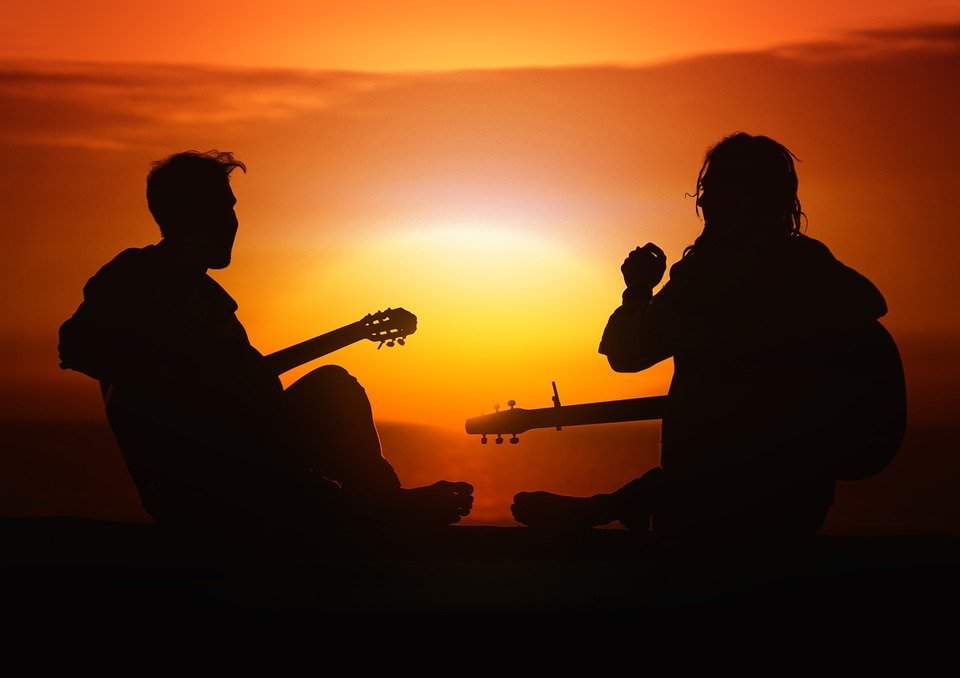 In collaboration with the 15th International Guitar Festival EGTA – Cyprus, the Pharos Arts Foundation is proud to host a very special concert in The Shoe Factory in Nicosia, on Friday 16 April 2021 / 8:30pm. Cyprus guitarphiles will be treated to two distinct programmes in the same evening – a recital by the renowned Greek guitarist Thanos Mitsalas and a recital by the talented Cyprus Guitar Trio.

Having been described by Classical Guitar Magazine as “a formidable guitarist” and praised by Minor 7th Magazine for his “enormous and evocative tonal range, world-class command of the instrument, and a unique and defining musical voice”, Thanos Mitsalas has been recognised as one of the leading guitarists of his generation. His rich musicianship as well as his tireless quest for artistic perfectionism have already credited him with the highest praise from the critics, while his intense musical intuition, flawless technique and personal style are captivating the audiences worldwide.

Founded in 2015, the Cyprus Guitar Trio is dedicated to the promotion of the important yet unexplored repertoire of the combination of three classical guitars, as well the creation of new works for this combination, and the arrangements and transcriptions of existing works.

Please note: Due to the Covid-19 restrictions, seating is limited, therefore the audience is advised to purchase their tickets in advance through the Pharos Arts Foundation’s box office. 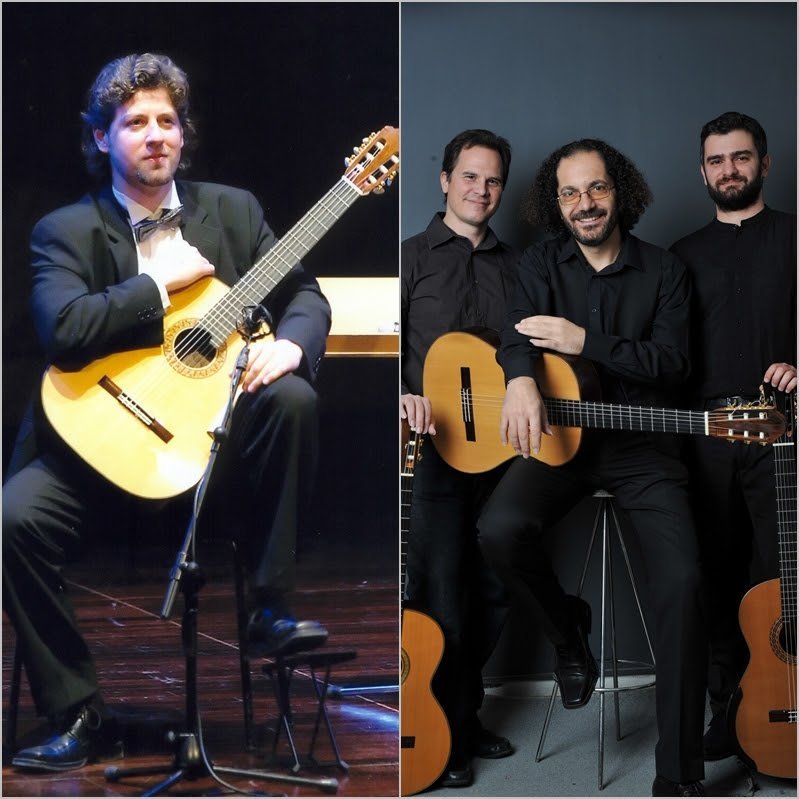 Thanos Mitsalas is steadily gaining recognition as one of the leading guitarists of his generation. His rich musicianship as well as his tireless quest for artistic perfectionism have already credited him with the highest praise from the critics, while his intense musical intuition, flawless technique and personal style are captivating the audiences worldwide. Through his devotion and extensive study and performance of the idiomatic music of Sergio Assad, Thanos is regarded by the great Brazilian master as a top interpreter of his works, “Thanos ranks today among the top performers in the whole world!”. Classical Guitar Magazine referred to him as “a formidable guitarist!”; American Record Guide praised, “Mitsalas’s playing is excellent…His technical command and sense of invention and expression are impressive!”; MusicWeb International Magazine wrote about his solo Assad CD release, “Everywhere one senses a vitality of personal commitment and disciplined freedom in his interpretations. Thanos is an impressive soloist!”, while Minor 7th Magazine mentioned, “Mitsalas marries all of the elements of great classical guitar playing: enormous and evocative tonal range, world-class command of the instrument, and a unique and defining musical voice”.

Thanos Mitsalas embarked on his international career at a very early age, as the youngest ever winner in the history of competitions such as Volos International Guitar Festival & Competition in Greece (at the age of 15), Silesian Guitar Autumn in Poland, and Carrefour Mondial de la guitar in Martinique, South America (at the age of 18). Since then, he has performed in a number of important venues, including the Lincoln Center and Merkin Hall in New York, Hancock Auditorium in Los Angeles, Queen’s Grand Theatre in Zhengzhou / China, the Athens Megaron of Music, amongst others, and he has toured extensively throughout Europe, Asia, North & South America.

Mitsalas graduated with the greatest honors from New Conservatory of Thessaloniki-Greece (class of Costas Cotsiolis), Hochscule fur Music in Koln/Aachen-Germany (class of Thomas Muller Pering) and from the prestigious Juilliard School-NY, where he studied on a full scholarship at Sharon Isbin’s class, evaluated as one of the most brilliant talents of the school.

A versatile guitarist, Mitsalas performs both as a soloist and in chamber music ensembles and has performed with orchestras conducted by such renowned conductors as Leo Brouwer, Josif Conta, Theodoros Antoniou, Jan Wincenty Hawel, Emir Saul among others. Besides Sergio Assad, a number of important contemporary composers have dedicated works to Thanos Mitsalas, including Gerard Drozd and Simone Iannarelli, and he has performed several premieres of guitar compositions by major composers of our time such as Leo Brouwer, Carlo Domeniconi, Joaquín Clerch, and Roland Dyens. Thanos has repeatedly recorded for numerous Greek and international radio and TV networks.

Alongside his performing activities, Thanos Mitsalas teaches the guitar at the State Conservatory of Thessaloniki and the Conservatory of Northern Greece, and he is a guest professor at many international music festivals, music schools-universities or summer music academies. For ten years he was the Artistic Director at the Municipal Conservatory of his birth-town Naoussa (Greece). He has been the professor of a number of distinguished students, who have successfully pursued careers in the international artistic and educational field.

Mitsalas’ extensive discography (with works by Assad, Bach, Barrios, d’ Angelo, Tarrega, Llobet amongst others), which is exclusively released by the American label ClearNote (OH), has earned him raving reviews by the international press. Thanos is a D’Addario Artist/Ambassador. He uses EJ46FF Pro-Arte (Dyna/Carbon) strings on his 1999 Thomas Humphrey Guitar (Millenniun Model/Spruce-top).

The Cyprus Guitar Trio was founded in 2015. Comprising three renowned classical guitarists from Cyprus: Vasilios Avraam, George Christofi and Socrates Leptos. The Trio is dedicated to the promotion of the important yet unexplored repertoire of the combination of three classical guitars, as well the creation of new works for this combination, and the arrangements and transcriptions of existing works. Cyprus Guitar Trio has already participated in many festivals and concerts in Cyprus and Greece as: 19th Cultural Festival of University of Cyprus – Axiothea, Larnaka Festival of Classical Music 2016, 17th International Chamber Music Festival of Pharos at Kouklia, in Concert Series of Cypriots Artists at Shoe Factory, at the International Guitar Festival in Volos and at 7th International Guitar Festival in Kardista (Greece).

Vasilios Avraam studied at the Ferenc Liszt Conservatory in Hungary with Istvan Adrovicz, at the National Conservatoire of Region in Strasbourg with Pablo Marquez and at the Academy of Music in Bratislava where he received his Musical Doctoral Degree in classical guitar under the supervision of Jozef Zsapka. He has participated in a number of festivals, including the Zempléni Festival (Hungary), the Festival of Europe in Mâcon (France), the International Music Festival in Clermont-Ferrand (France), the 5th Festival des Musiques Rares Musiques Dérangées in Mâcon (France), several times he was invited to the Spring Festival of Eger (Hungary), the Cultural Festival of Cyprus University, the Classical Music Festival in Larnaca. He is the First Prize winner of the National Guitar Competition in Hungary in 1998. Several of his solo recitals and orchestra performances in guitar concertos were recorded by television channels and radio stations of Hungary and Cyprus. He played with the State Orchestra of Cyprus, with Cantus Agriensis Choir, with Polyfonia Choir, several times with the Symphonic Orchestra of Eger and several times with the music group Musica Aulica in Hungary and in France. Vasilios Avraam is guitar teacher at state music school.

George Christofi is a holder of a BMus (First Class), and MMus in Guitar Performance (Distinction) from the University of Hull and an MA (Distinction) and a PhD in Composition from the University of York. Considered one of the most important and talented composers of his generation, Christofi has composed music for world renowned soloists and ensembles, including, Mario Caroli (flute), Sarah Leonard (soprano), Harry Sparnaay (bass clarinet), Rohan de Saram (cello), Ensemble Musiques Nouvelles, Ensemble 10/10, Orchestre National de Lorraine, The Endymion, Kreutzer Quartet, Ensemble Cairn, Ensemble Berlin PianoPercussion, L’Opéra National du Rhin. His music has been broadcast on BBC Radio 3 and presented in Festivals such as ‘Clarinet baix i electronica’ by Phonos – Fundació Música Contemporània (Spain), International Music Festival Heidelberger ‘Frühling 2007’ (Germany), ‘Pescara Fiera Festival (Italy), Seoul International Computer Music Festival (Korea), Culturale San Fedele – Electrobag on Tour (Italy), amongst others. Christofi is a Composition Lecturer at the European University Cyprus.

Socrates Leptos studied guitar at the New England Conservatory in Boston. In 2000 he was awarded a Fulbright scholarship to study at Yale University under Ben Verdery, and in 2009 he was awarded the Doctor of Musical Arts Degree from the Peabody Institute. During his studies, Leptos won three awards and performed extensively in the US. He participated in masterclasses with Manuel Barrueco, Sharon Isbin, Jorge Morel, Paul O’dette, David Tannenbaum, Gordon Crosskey, and John Duarte. Leptos has recorded music for radio and television and he has contributed to various recordings, both as guitarist and composer. He is currently a member of the guitar faculty at the University of Nicosia