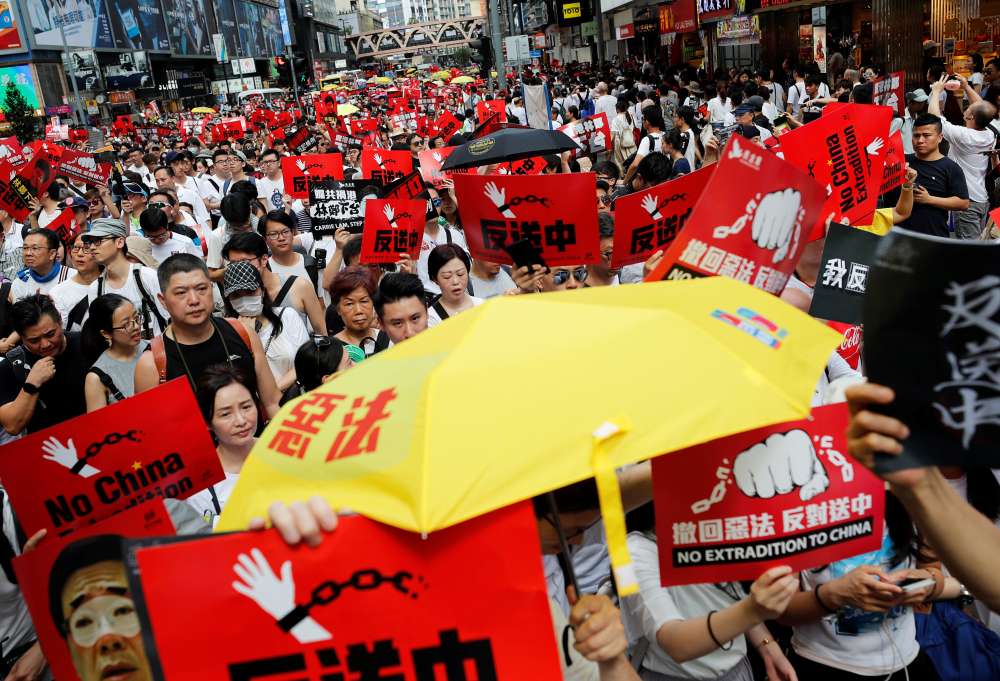 Tens of thousands of people took to Hong Kong’s streets on Sunday in a last bid to block a proposed extradition law that would allow suspects to be sent to China to face trial, with police bracing for the biggest march in the city in 15 years.

Police chiefs called for public restraint, government-funded broadcaster RTHK reported, as they mobilised more than 2,000 officers for a march that organisers expect to draw more than 500,000 people.

That would make it the biggest rally since a similar number turned out in 2003 to challenge government plans for tighter national security laws, which were later shelved.

Early indications suggested the crowds could reach several hundred thousand, with underground rail stations jammed with people trying to join the rally, which will start at 3 pm (0700 GMT) in Victoria Park.

Protesters who arrived early chanted “no China extradition, no evil law” while others called for Hong Kong’s Chief Executive Carrie Lam to step down. One protestor held a sign reading “Carry off Carrie”.

Lam has tweaked the proposals but has refused to withdraw the bull, saying it is vital to plug a long-standing “loophole”.

Opposition to the proposed bill has united a broad range of the community, from usually pro-establishment business people and lawyers to students, pro-democracy figures and religious groups.

“I come here to fight,” said a wheelchair-bound, 78-year-old man surnamed Lai, who was among the first to arrive at Victoria Park. 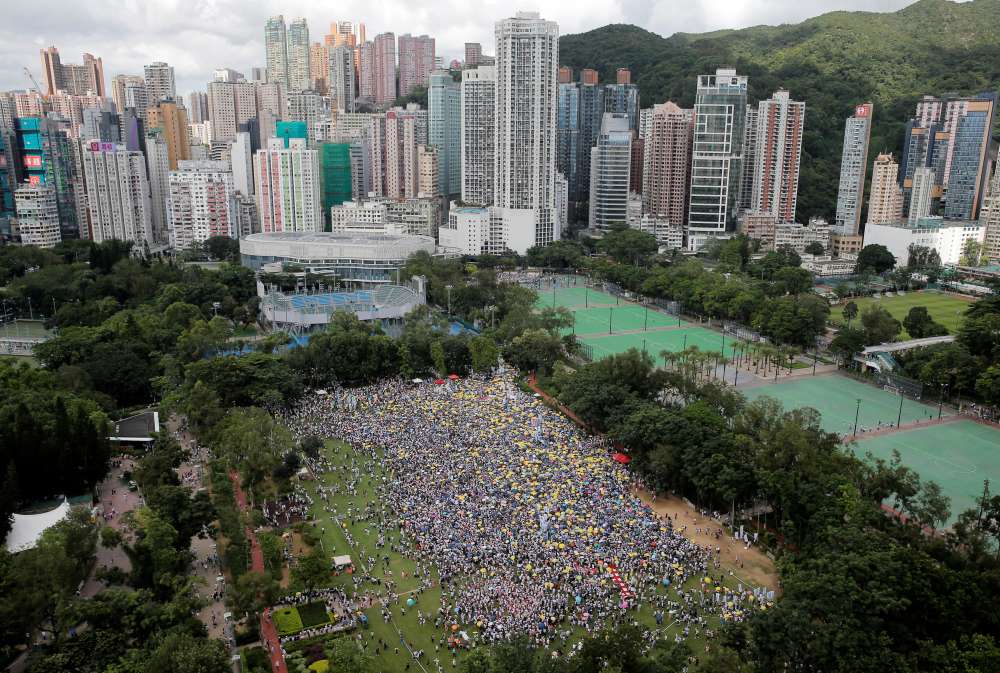 “It may be useless, no matter how many people are here. We have no enough power to resist as Hong Kong government is supported by the mainland,” said Lai, who suffers from Parkinson’s disease.

The marchers will slowly make their way through the crowded Causeway Bay and Wanchai shopping and residential districts to Hong Kong’s parliament, where debates will start on Wednesday into government amendments to the Fugitive Offenders Ordinance.

The changes will simplify case-by-case arrangements to allow extradition of wanted suspects to countries, including mainland China, Macau and Taiwan, beyond the 20 that Hong Kong already has extradition treaties with.

But it is the prospect of renditions to mainland China that has alarmed many in Hong Kong. The former British colony was handed back to Chinese rule in 1997 amid guarantees of autonomy and freedoms, including a separate legal system.

“It’s a proposal, or a set of proposals, which strike a terrible blow … against the rule of law, against Hong Kong’s stability and security, against Hong Kong’s position as a great international trading hub,” the territory’s last British governor, Chris Patten, said on Thursday.

Whether in business, politics or social and religious groups, opponents of the plan say they deeply question the fairness and transparency of the Chinese court system and worry about security forces contriving charges.

Foreign governments have also expressed concern, warning of the impact on Hong Kong’s reputation as an international financial hub, and noting that foreigners wanted in China risk getting ensnared in Hong Kong.

The concerns were highlighted on Saturday with news that a local high court judge had been reprimanded by the chief justice after his signature appeared on a public petition against the bill. 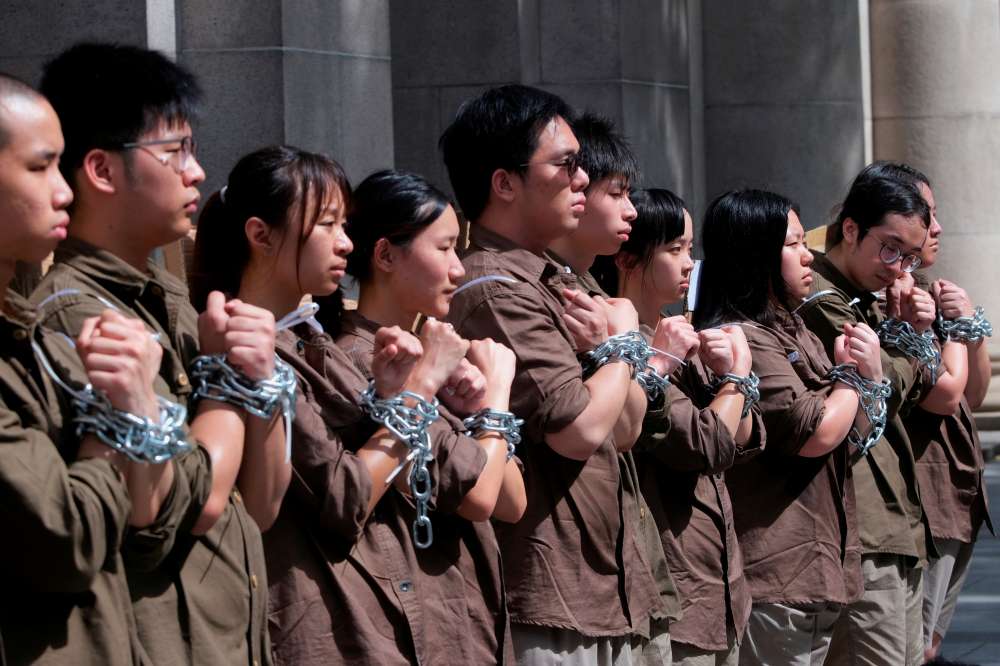 Reuters reported earlier that several senior Hong Kong judges were concerned about the changes, noting a lack of trust in mainland courts as well as the limited nature of extradition hearings.

Human rights groups have repeatedly expressed concerns about the use of torture, arbitrary detentions, forced confessions and problems accessing lawyers.

Hong Kong government officials have repeatedly defended the plans, even as they raised the threshold of extraditable offences to crimes carrying penalties of seven years or more.

They say the laws carry adequate safeguards, including the protection of independent local judges who will hear cases before any approval by the Hong Kong chief executive.

No-one will be extradited if they face political or religious persecution or torture, or the death penalty.

“We continue to listen to a wide cross-section of views and opinions and remain to open to suggestions on ways to improve the new regime,” a government official said on Sunday.

By Andreas Nicolaides
Previous articleCustomer chases off burglar from bakery store
Next articleLimassol: Burglars steal valuables from home and drive off with resident’s car

A knife-wielding attacker shouting "Allahu Akbar" beheaded a woman and killed two other people in a suspected terrorist attack at a church in the...
Read more
Local

A fire has broken out at a printing office located in Latsia area. According to the first information, the fire broke out at a machinery...
Read more
Local

500 COVID-19 tests in Kyperounta after increased number of cases

The Health Ministry announced that over the coming days, 500 COVID-19 tests will be conducted in Kyperounta after the increased number of confirmed cases. As...
Read more
Local

1.3 million referrals to specialized doctors in one year

From the very first day of the implementation of the National Health System, meaning as of 1 June 2019, and until the first 20...
Read more
Local

Photos circulating on the internet, showing a couple of newlyweds from Turkey but also fashion models posing on the ruins of the fenced-off town...
Read more

A knife-wielding attacker shouting "Allahu Akbar" beheaded a woman and killed two other people in a suspected terrorist attack at a church in the...
Read more
World

Germany announced plans to shut down large swathes of public life for a month on Wednesday while France prepared to tighten controls further as...
Read more
World