Technical Committee on Cultural Heritage presents its achievements in Brussels 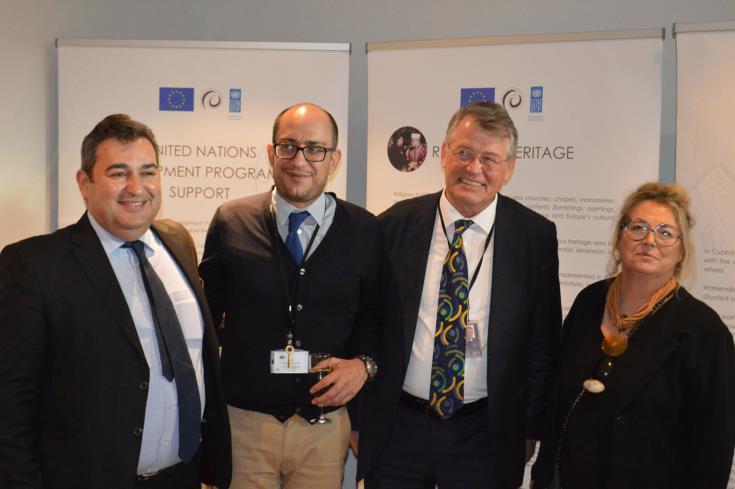 The Technical Committee on Cultural Heritage appeared before the European Parliament in Brussels for the first time in its ten-year old history, where it unfolded the success project of restoring monuments that belong to the Greek Cypriot, Turkish Cypriot, Maronite and Armenian communities on the island.

The members were invited by MEP Reimer Boege and presented to the European Parliament, the results of 10 years of hard work and successful completion of 31 heritage sites across Cyprus, including Orthodox, Maronite and Armenian churches, mosques and minarets, fortifications, hamams, aqueducts and watermills.

Both Greek Cypriot and Turkish Cypriot representatives spoke of the achievements and cooperation, while the UNDP said the committee is a testament to the trusting relationships that have been built over the years.

In his speech, Glafkos Constantinides, Greek Cypriot Member of the Technical Committee on Cultural Heritage, said the Brochure that the members of the committee presented to the EP, “contains and reflects the hard and meaningful work of the TCCH over the last 10 years, since 2008. “It is both a birth certificate and a passport of the TCCH signifying the birth, the first steps, the growth, the maturity, the validity of the journey of the mission and mandate of the TCCH.”

It is a record of what has been done involving 100 initiatives island-wide: 6 large monuments, 25 medium size, 23 small quick moving, 54 in all, including churches, mosques, hamams, fortifications, watermills and aqueducts, and no less than 46 design studies looking ahead to implementation, said Constantinides.

Cultural heritage can act as an instrument for collaboration, he said, a vehicle for shared thinking and a focus for joint actions. The journey from 2008 to 2018 has shown in the clearest possible way how cultural heritage conservation, with all its complexities, challenges and diverse choices, can be a paradigm for the future that Cyprus needs so much.

Constantinides said the work of the committee has not finished. “We have a lot to do and a lot to face up to, many priorities to pursue both on the ground and in society”, concluding that the Brochure “is a manual, a manual of how cooperation, confidence, mutual understanding and good will can produce results”.

He said the Technical Committee on Cultural Heritage has been cooperating with the European Union since 2010 and this was its first visit to Brussels and first direct dialogue with EU institutions, noting that they need to increase contacts with the EU representatives and officials in Brussels.

He said the Technical Committee began its journey 10 years ago and “learned to work together by creating an environment of mutual trust and cooperation following a long and cumbersome process.”  They travelled from Paphos to Karpas and visited hundreds of monuments all around the island. In the end, projects were prepared with technical support from the UNDP and financial contribution from the European Union and significant work has been carried out.

He thanked the European Union, Evkaf Foundation and Church of Cyprus for their financial support and the UNDP for the technical support.

Noting that Cyprus is an island at the crossroads of three continents at the “furthermost West of east” and “furthermost East of West”, Tuncay said “as the members of the Technical Committee, we acknowledge the responsibility of preserving, sustaining this richness and handing over it to future generations.”

Concluding, he stressed that the sustainable protection and maintenance of the monuments on this island can be found only with the comprehensive solution of the Cyprus problem.

Tiziana Zennaro, Senior Programme Manager, Head of Office of the UNDP in Cyprus, said the UNDP continues to be the development partner of choice for the European Union due to its unique, trusted, neutral role and track record of solid on-the-ground expertise in implementing confidence building projects.

She noted that funding is crucial, however from UNDP’s observations of working very closely with the Technical Committee, the key factor to success is the levels of trust between the members.

Referring to the brochure published by the committee, she said it celebrates the achievements of the Technical Committee on Cultural Heritage since 2008 and it is an “ultimately a testament to the trusting relationships that have been built over the years”.

These relationships have resulted in the successful completion of 31 heritage sites  that were conserved, structurally supported, physically protected or restored.

She further said that in 2019, together with the Technical Committee, “we are planning to organise a regional conference on Confidence Building through Cultural Heritage, with the aim of further strengthening this important emerging practice area as part of broader knowledge sharing efforts –  we look forward to exchanging ideas and experiences with other colleagues working in this field”.

Thanking the EU for its funding and partnership in 2019, Zennaro said “we will continue to support confidence-building efforts, not only with the Technical Committee on Cultural Heritage but other Technical Committees in order to engage more people through implementing pilot projects for expanding confidence-building measures, that not only demonstrate the benefits of reconciliation, but also provide avenues for the work of the technical committees to become more inclusive”.

He also said the European Union has been funding the work of the Technical Committee on Cultural Heritage since 2012 with almost 15 million provided  so far and another 2,5 will  be provided later this year. He said the Technical Committee on Cultural Heritage accomplished not only these tangible outputs, but the most incredible achievement by the Committee was to successfully bring the two communities to work together, share a vision and achieve objectives,  for the common interest of all Cypriots, no matter on what side of the line.

Speaking to CNA, Boege said that he was involved from the very beginning with the issue of cultural heritage and invited the committee co-chairmen, Glafcos Constantinides (standing in for Takis Hadjidemetriou) and Turkish Cypriot Ali Tuncay, as well as colleagues from the Cultural and Budget committees. “We had quite an international audience where the two co-chairs, the EU and UNDP presented the results”, he said.

It was an emotional and touching presentation as to the results as culture is linked with tolerance and respect, said Boege, noting the intention was to show the results but at the same time indicate to colleagues, “that we are not yet finished, there are other projects waiting also for hopefully for financial support”. “I am quite optimistic that this success story will go on”, he concluded.

An exhibition was also held to mark 10 years of the work of the Technical Committee for Cultural Heritage.