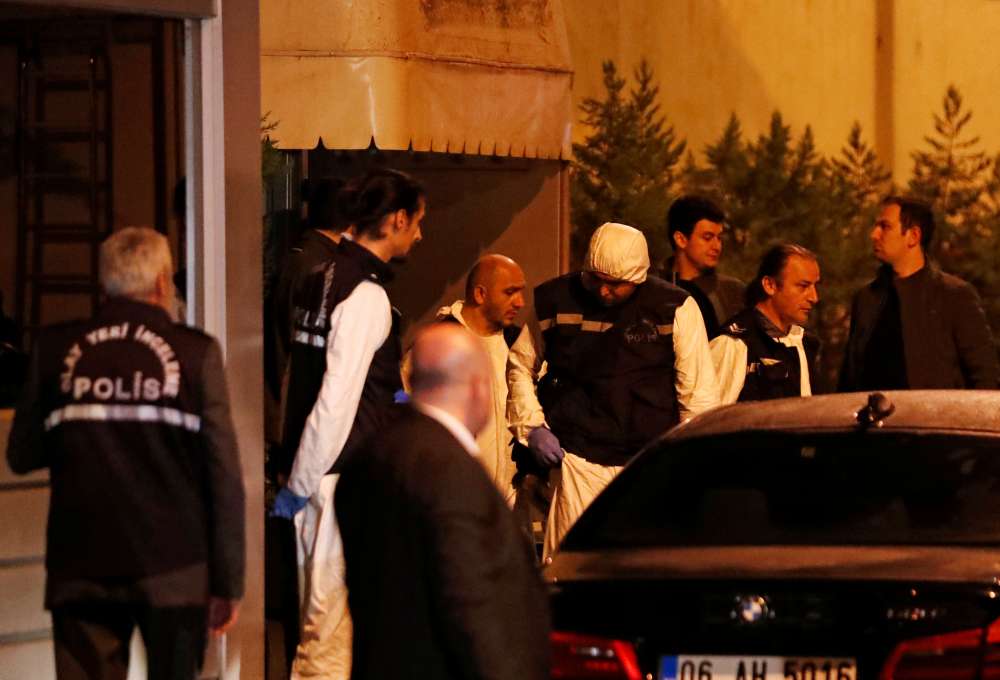 Turkish and Saudi teams investigating the disappearance of Saudi journalist Jamal Khashoggi two weeks ago left the Saudi consulate in Istanbul early on Tuesday after a nine-hour search of the building, Reuters witnesses said.

While the search was being carried out, CNN and the New York Times reported that Saudi Arabia was preparing to acknowledge Khashoggi’s death in a botched interrogation and U.S. President Donald Trump speculated “rogue killers” may be responsible. The consulate was the last place Khashoggi was seen before he vanished on Oct. 2.

Trump dispatched Secretary of State Mike Pompeo to meet King Salman over the case that has strained the Americans’ relationship with the Saudis, carefully cultivated by the U.S. president.

A Turkish crime scene investigation team of around 10 people left the consulate before 5 am (0200 GMT) after completing a search early on Tuesday, one witness said. A Turkish prosecutor left around 1-1/2 hours later, followed shortly after by a Saudi team that departed in three vehicles, another witness said.

Four forensic vehicles arrived outside the consulate and took away soil samples as well as a metal door from the garden, the Reuters witness said. A police dog was part of the search team.

A Turkish diplomatic source had earlier said that a joint Turkish-Saudi team would search the consulate.

Khashoggi, a U.S. resident, Washington Post columnist and leading critic of the powerful Saudi crown prince, Mohammed bin Salman, vanished after entering the consulate in Istanbul to get marriage documents. Turkish officials say they believe he was murdered there and his body removed.

Citing two unidentified sources, CNN reported on Monday that Saudi Arabia was preparing a report that would acknowledge Khashoggi was killed as the result of an interrogation that went wrong. The Saudi government could not be reached immediately for comment on the CNN report.

The New York Times, citing a person familiar with the Saudi plans, reported the crown prince had approved an interrogation or rendition of Khashoggi back to Saudi Arabia. The Saudi government, it said, would shield the prince by blaming an intelligence official for the bungled operation.

The case has provoked an international outcry against Saudi Arabia, the world’s top oil exporter, with more media and business executives pulling out of a planned investment conference there this month.

Members of his family called for an investigation, in a statement released on Monday.

“We are sadly and anxiously following the conflicting news regarding the fate of our father after losing contact with him two weeks ago,” they said.

“The strong moral and legal responsibility which our father instilled in us obliges us to call for the establishment of an independent and impartial international commission to inquire into the circumstances of his death.”

By In Cyprus
Previous articleCouple arrested after 2.6 kilos of cannabis found at Paralimni home
Next articleAustralia embraces royal couple after pregnancy announcement