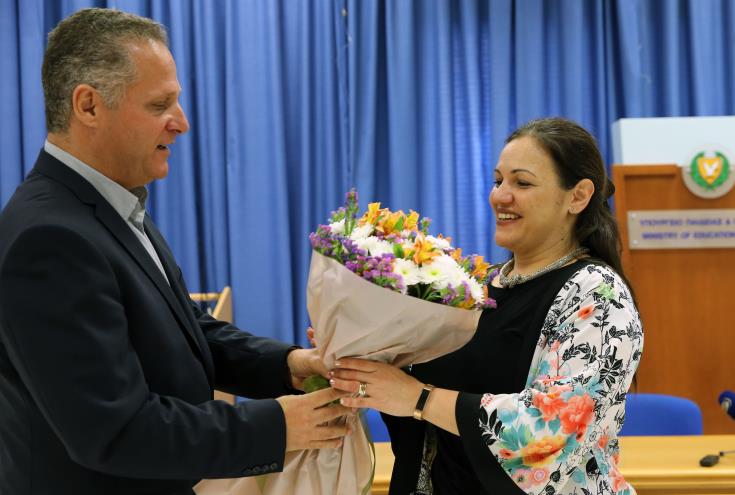 The 2018 Global Teacher Prize winner Andria Zafirakou does not think she is the best teacher in the world nor does she believe that there is such a thing as the best teacher, pointing out that what teachers are doing across the world in every country is very important since they can help change people’s lives.

Zafirakou, in Cyprus at the invitation of the Ministry of Education and Culture, thanked Cypriot teachers for their dedication, stressing that what they are doing is very difficult, especially in this time of an economic crisis.

Zafirakou, who has Greek Cypriot origins living and working in London, was honoured on Tuesday by the Minister of Education and Culture Costas Hampiaouris, in a special ceremony at the Ministry. She said she feels very happy being in Cyprus and thanked everyone for the love they have shown her since the award was announced. As she said, this is the second time she visits Cyprus, which she described as her second homeland.

“I would like to thank all my compatriots, who recognise the work I do at my school in London which has been given prominence because of the prize awarded to me,” she said and assured that she is ready to offer her knowledge and experience to her colleagues here.

On his part, speaking at the event, the Minister congratulated Zafirakou and thanked her for her visit to Cyprus. “We are particularly honoured for accepting our invitation, not only because you are a role model for all of us but because I am convinced that we share the same vision for education,” he pointed out.

Zafirakou is an Arts and Textiles teacher at Alperton Community School in northwest London.

She visited Cyprus for the first time as a student to see the local Lefkara embroidery. She says her family comes from the village of Yialousa, in the island’s northern Turkish occupied north, where her grandparents used to live but also from Famagusta, also in occupied Cyprus, where her mother was born. She learned to speak Greek from her parents and grandmother.