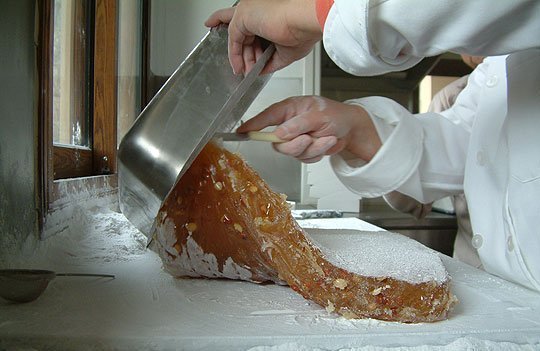 Phini’s visitor usually waves goodbye to the village with a box of “loukoumia” (Turkish Delights) in his/her hand. He/she wants to keep something out of the sweetness of his/her visit to the village and the “loukoumi” of Phini seems to be most becoming.

The art of making the “loukoumi” of Phini was introduced to the village by Philakti Pelavaki or simply the Confectioner as he was known. This man lived, since childhood and for many years, in Egypt where he learned the art of “Loukoumi”. When he returned to Cyprus in 1930, he brought with him this art and started practising it in Phini since then.

The preparation of “loukoumi” is not an easy job.

The maker must begin his work very early in the morning. After separating in the right proportions the materials that are needed (sugar, starch, various flavours, and -of course -water), he places the “chardji” (large dixie) at the “niskia” (a special place for the heating of the “chardji”). He then puts in the materials he separated before and lights the fire, which must not be too strong, and slowly-slowly starts the cooking.

At the same time he must begin a slow, continuous stirring of the mix in the “chardji” that lasts for several hours. Of course, the mix is thin and stirring is achieved rather easily in the beginning. Later on however, when it starts to weigh and stirring becomes a rather difficult and tiresome job. Since it lasts for hours, one person alone cannot cope. He needs the help of a companion so as to switch and relieve one another.

After the “loukoumi” is cooked and the stirring is finally over, the “chardji” is taken off the fire and its content is poured into wooden moulds, where it stays until the next day to cool off. The next day it is cut into small pieces and -after it is sprinkled with sifted sugar -it is inserted into boxes; now it is ready.

The “loukoumi” of Phini is known all around Cyprus and abroad.

Courtesy of the Community Council of Phini

By In Cyprus
Previous article
US State Department presents report on religious freedom, including Cyprus
Next article
A step forward but still a long way to go for CCB negotiations

Tastes of Cyprus. “To Patriko” tavern in Tersefanou