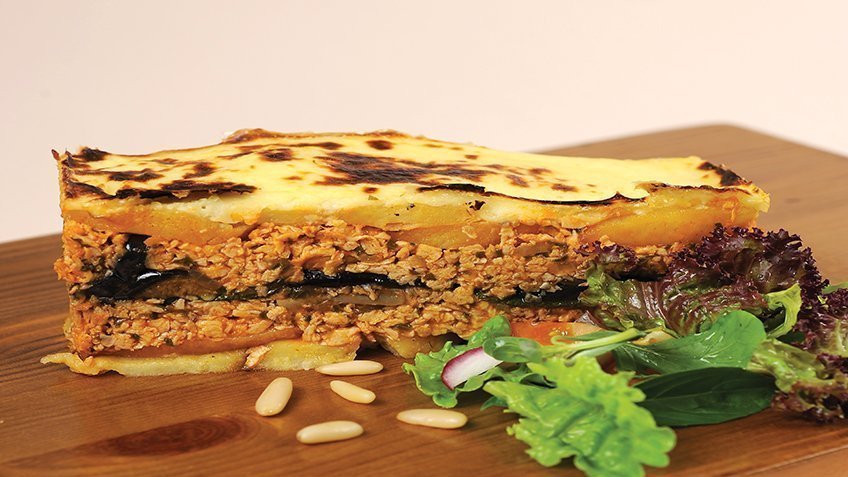 Preheat the oven to 200 ° C. Put the slices of potatoes and eggplant in a bowl, sprinkle them with 2 tablespoons of olive oil and shake them to catch the oil. Spread them on the oven baking pan with non-stick labels and bake in the oven for about ½ hour until they brown slightly, turning them at intervals.

In the meantime, saute the remaining olive oil until it is blanched, add the soy mince and stir it to boil. Then add the wine and let it evaporate before adding the tomatoes, sugar and cinnamon. Allow the mixture to boil until the sauce is moistened and finally stir in the chopped parsley, pine nuts, salt and pepper.

Prepare the bechamel: Heat the oil in a small pot and stir in the flour. Then add the milk, stirring constantly, and continue boiling, stirring very often, until the cream thickens. Salt and pepper and add 1 pinch of nutmeg.

Set the oven thermostat to 180 ° C and start making the moussaka. Grease a pan and spread the potato slices on it. Put the mince over the sauce, cover it with eggplants and finally spread the béchamel on its surface. Bake the moussaka in the oven for about ½ hour until the surface is brown and serve with a nice green salad.