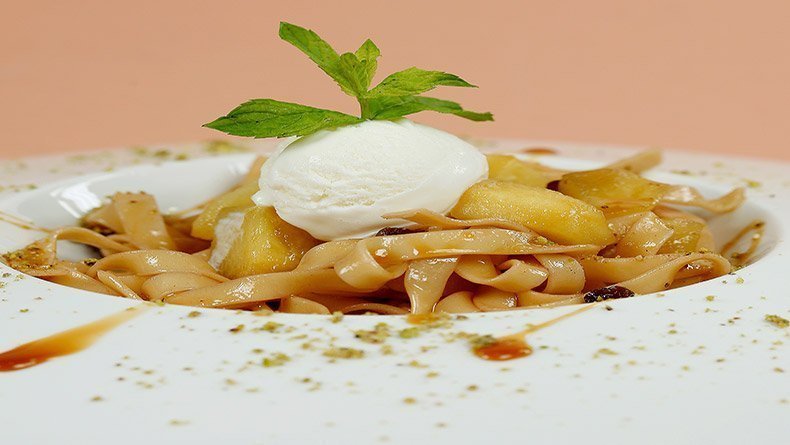 1-2 tablespoons of water (if needed)

Prepare the tagliatelle: Put all the ingredients in a mixer bowl (or a mixer) and mix until they become a smooth dough. If it is too tight, add 1-2 tablespoons of water.

Pass the dough first out of the machine to make it too thin and then cut it into the tagliatelle. Spread them on towels sprinkled with flour and flour them very lightly so they do not stick together. Keep them aside until you prepare the apples.

Peel the apples and cut them into slices. Put them in a small saucepan with the zest, sugar, cinnamon and ½ cup of water and stir until they soften so they can melt easily. Remove them from the fire and melt them with a fork. Pour the butter into a large, non-stick pan and pour in the apple puree. Add the remaining apples and raisins and stir until the apples soften. Boil plenty of water in a saucepan and add the cinnamon tagliatelle.

Allow to boil for 2-3 (they will float on the surface) and drain them. Put them on 4 dishes, add apples and apples over a tablespoon of ice cream and serve them.