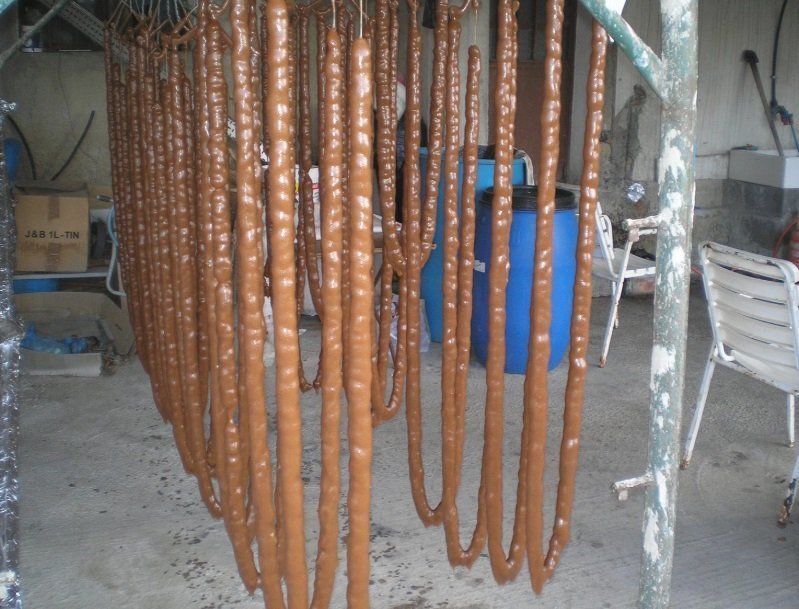 The famous agricultural product of Spilia-Kourdali are the walnuts. The two rivers of the community are full with old and new walnut trees. The residents know from the very old years that they should kindly treat these very tall trees, in order to have rich and good quality products. A lot of walnuts are cut fresh in June, in order to become the famous sweet “Karydaki”. In September the residents hit with long sticks (“vakles”) the walnut trees in order for the walnuts to fall and the mature ones are collected. Their green skin is then removed using a knife in order to be left in the sun for some days to dry. There are various varieties of walnuts. The residents know well which are the best ones and for this reason they are very selective. The walnuts of Spilia are famous for the size, their white “fruit”(inside) and their infrequent flavor. The walnut is the dry fruit that accompanies “zivania” (alcoholic drink) a lot. The most usual products that are offered during a visit to another house, are “zivania”, walnuts, “kiofterka” and salted figs or fig-pie.

Another very old occupation of the residents has to do with the vines. The Cypriot varieties are cultivated, mainly the black and at very low extents the white (sinisteri). The grapes are collected in October, they immediately go for grinding with special manually operated machines and then they are stored in vats, which are at least 100 years old. Important quantities of must are removed from the grapes from which the landlords of Spilia-Kourdali produce legitimate “Soutzioukko” with almonds or with walnuts. From this also they also manufacture “Palouze” that is eaten immediately or is drained in order to produce “Kiofterka”.

Almost immediately, nature begins its work that is called fermentation, (scientifically: alcoholic fermentation). The contents of the vats foam. The residents of Spilia and Kourdali know very well that they will help to reach a perfect fermentation without having simultaneously the fermentation of vinegar (scientifically: acetic fermentation). For this reason every day they press the content of the vat with special timbers in order to avoid its mixture with oxygen of atmosphere. Also they remove in steps the stems (kares), so that the wine has the desirable acerbity. In 15 days the fermentation finishes and the must “Moustari” has become wine. The wine (“kouliazete”) is separated from the solid remainders (“zivana”) and is stored in other vats. There it will remain for another 40 days and at the end of November the wine limpid and mature, will be ready to accompany the residents during the cold winter that begins and to keep them hot. It is a rich black dry (“sterko”) wine with amazing flavor and smell.

The “zivana” will then be led to the cauldrons in order to produce “Zivania”. The zivania produced at Spilia is usually of 22 “grada”, that is to say 48% content in alcohol. It has an important smell and flavor and is exempted from methyl alcohol, because the stems are removed during fermentation, but also because the first bottle of zivania that runs from the cauldron is removed due to the fact that usually contains dangerous methyl alcohol. 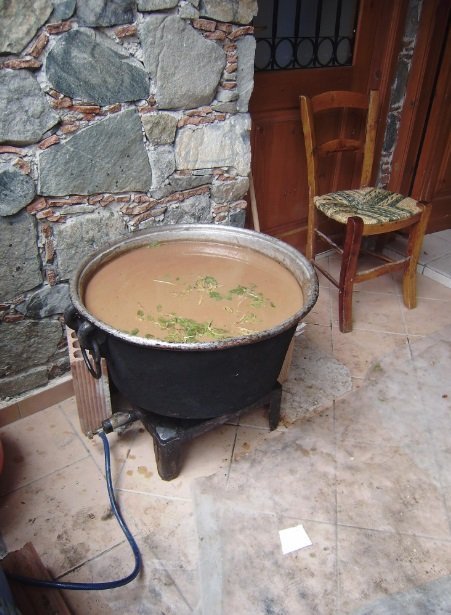 The essential trees that accompany the vines are the “athasies” (almond trees) and the fig trees. Big part of the almonds is used in order to produce Soutzioukko. The fig trees of the vines produce the figs “ampelisima” (ntelounika), that are small in size but very gently and are not influenced by the Mediterranean fly. These figs are usually left to become mature and to fall on their own from the fig tree. Then they are unfolded in the sun and afterwards they are put in hot water that contains “alousiva”, leaves of laurel and other natural perfumes. Almost immediately they come out from water and after they are dried they are covered with flour. This is how the eminent salted figs of Spilia are produced. Some of these figs are grinded and mixed with anise, “marathosporo” and walnuts. Then this mixture is sprinkled with legitimate genuine rose water from Spilia. With this mixture the landlords make the famous fig pies, that have the shape of small bread. It is an enjoyable and very thermal natural product that it does not spoil.

Spilia-Kourdali has a sweet smell every May. A lot of houses and gardens are covered around with an enormous deep red rose hoop that has as sweet smell. During the morning the landlords collect with special tools the roses and fill their baskets. The roses enter then in special small cauldron, “lampiko”, from which they produce the legitimate rosewater of Spilia. At the cafes of the village it is served a lot during summertime with cold “machallepi”. It is a real enjoyment!

Spilia-Kourdali, because of their cool climate and the quality of water and soil, they produce special flavor fruits and vegetables. From the fruits the most important are the cherries, the peaches, “chrysomila”, apples, quinces etc. From the vegetables they produce the famous fresh bean (“Pitsillisimo”), tomatoes, potatoes etc.

Courtesy of the Community Council of Spilia / Koudali