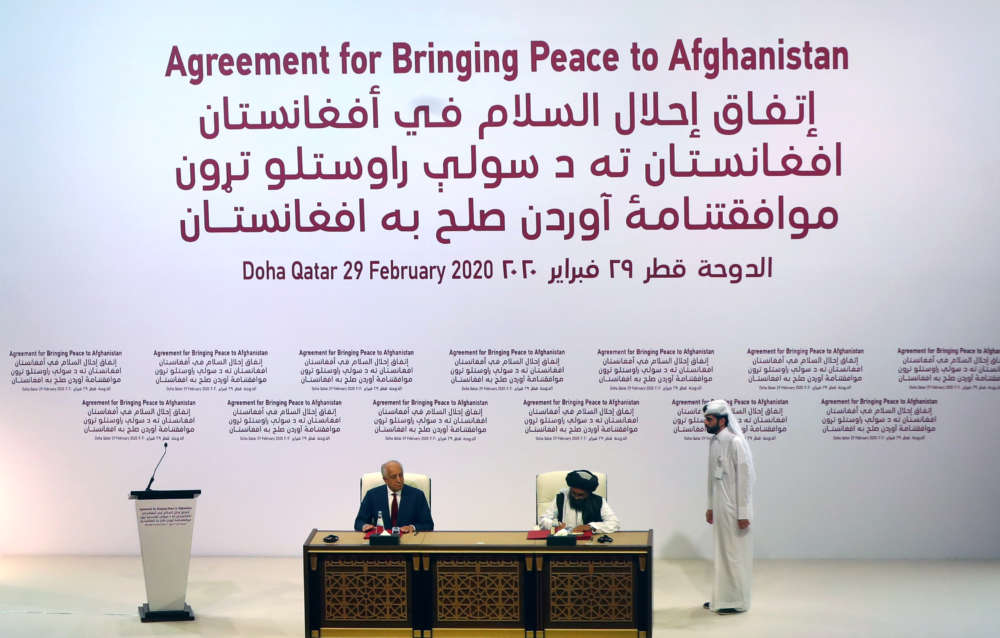 The United States signed a historic deal with Taliban insurgents on Saturday that could pave the way toward a full withdrawal of foreign soldiers from Afghanistan over the next 14 months and represent a step toward ending the 18-year-war there.

While the agreement paves the way for the United States to gradually pull out of its longest war, many expect that talks to come between the multiple Afghan sides will be far more complicated.

The deal was signed in the Qatari capital Doha by U.S. special envoy Zalmay Khalilzad and Taliban political chief Mullah Abdul Ghani Baradar. U.S. Secretary of State Mike Pompeo was on hand to witness the ceremony.

U.S. Defence Secretary Mark Esper meanwhile travelled to Kabul on a visit that officials and experts said was aimed at reassuring the Afghan government about the United States’ commitment to the country.

For U.S President Donald Trump, the deal represents a chance to make good on his promise to bring U.S. troops home. But security experts have also called it a foreign policy gamble that would give the Taliban international legitimacy.

“Today is a monumental day for Afghanistan,” the U.S. Embassy in Kabul said on Twitter. “It is about making peace and crafting a common brighter future. We stand with Afghanistan.”

Hours before the deal, the Taliban ordered all its fighters in Afghanistan “to refrain from any kind of attack … for the happiness of the nation.”

“The biggest thing is that we hope the U.S. remain committed to their promises during the negotiation and peace deal,” said Zabiullah Mujahid, a spokesman for the hardline Islamist group.

Mujahid said it was “irritating and provocative” that foreign military aircraft continued to fly over Taliban territory, but militia fighters were following the order to stand-down.

For millions of Afghans, the deal represents some hope for an end to years of bloodshed.

“Peace is extremely simple and my country deserves it. Today is the day when maybe we will see a positive change,” said Javed Hassan, 38, a school teacher living on the outskirts of Afghan capital, Kabul.

Hassan’s children were killed in a bomb blast carried out by the Taliban in 2018. Since then, he has been writing letters to world leaders urging them to end the Afghan war.

But prospects for peace remain uncertain given the next step is reaching agreement with the Afghan government.

Senior members of the Afghan government and countries surrounding Afghanistan have been concerned that the United States could abandon Kabul much like it was perceived to have left the region after the Soviet Union exited Afghanistan decades ago.

The accord also comes amid a fragile political situation in Afghanistan. The Independent Election Commission said on Feb. 18 that Ghani won a Sept. 28 vote beset by allegations of rigging, technical problems and other irregularities.

Afghanistan Chief Executive Abdullah Abdullah rejected the results, claimed to be the victor and vowed to name a parallel government.

Michael Kugelman, deputy director Asia Program at the Wilson Center, said of Esper’s trip to Kabul that “Washington is essentially trying to show that its full strength is behind this deal and it wants to also indicate to Kabul that it’s fully behind Afghanistan as the peace and reconciliation process moves toward a formal beginning.”

“(Esper’s trip is) perhaps an indication that the U.S. is ready to essentially accept the new government in Afghanistan,” he added.

The war, which has killed tens of thousands of people, began when the United States launched attacks on Afghanistan just weeks after the Sept. 11, 2001, attacks on New York and Washington by the Afghanistan-based al Qaeda militant group.

Washington accused the Taliban of harbouring al Qaeda and its leader Osama bin Laden, and with its allies ousted the group from power. But the Taliban has remained a potent force and currently controls about 40% of Afghan territory.

Trump said in a statement on Friday said the deal will pave way for U.S. troop numbers to drop to 8,600 from about 13,000 in the weeks following the deal.

Further reductions of Western forces will hinge on the Taliban adhering to a “reduction in violence” pledge, a condition that will be assessed by the United States.

Under the deal, the Taliban wants 5,000 fighters to be released from Afghan-run jails, but it is not clear whether the Afghan government will agree.

There are also questions about whether Taliban fighters loyal to hardline Islamist splinter groups will be willing to adhere to the reduction in violence agreement.

Some senior commanders of the Taliban in Doha for the signing said they will ensure that the U.S. and Afghan governments accept all the conditions laid down by the group, according to Afghan defence officials.

Sources in the Taliban earlier this month said they were prepared to launch a spring offensive and had recruited more than 6,000 fighters and suicide bombers if the agreement collapses.