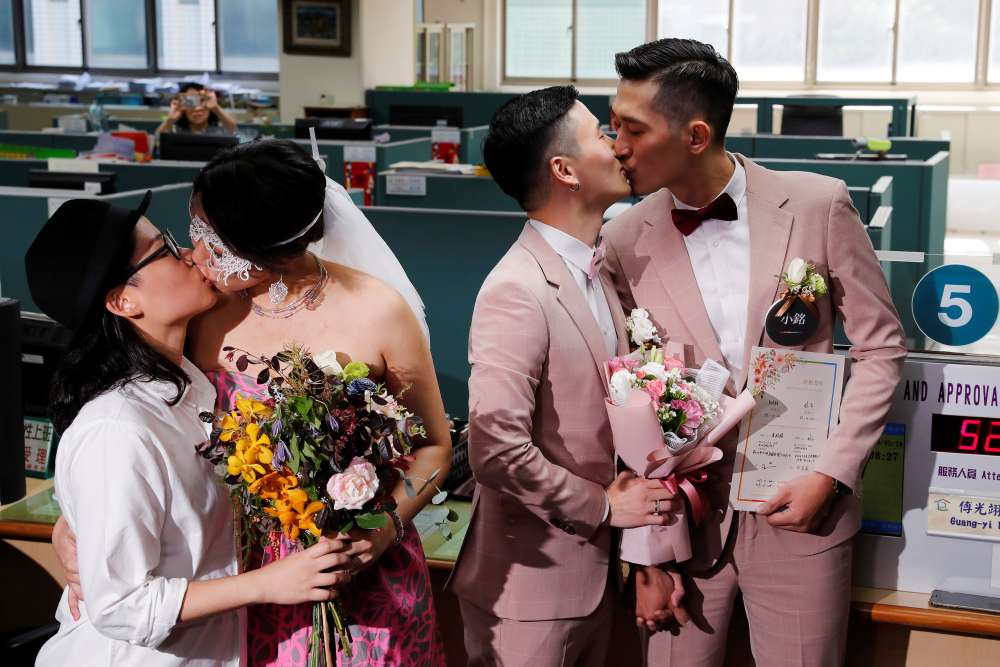 Same-sex couples tied the knot in emotional scenes in Taiwan on Friday, the first legal marriages in Asia hailed by activists as a social revolution for the region.

More than 360 same-sex couples married on Friday, according to government data, after years of heated debate over marriage equality that has divided the self-ruled and democratic island.

Twenty couples queued at a marriage registration office in downtown Taipei, where rainbow flags were on display alongside stacks of government-issued, rainbow-themed registration forms.

“I feel very lucky that I can say this out loud to everyone: I am gay and I am getting married,” said Shane Lin, a 31-year-old baker who with his partner were the first couple to register in the Taipei office.

“I am extremely proud of my country Taiwan,” said a tearful Lin.

The euphoria and emotion within the island’s gay community was on display as newly-wed couples walked down a rainbow-coloured carpet in a nearby park, watched by families and friends as well as diplomats and reporters.

Chi Chia-wei, an activist who brought a case to Taiwan‘s constitutional court that led to a landmark court ruling on same-sex marriage in 2017, congratulated the couples.

“This is the right that we deserved from a long time ago,” he said, draped in a giant rainbow flag that symbolises the colours of the international gay movement.

“As a beacon in Asia, I hope Taiwan‘s democracy and human rights could have a ripple effect on other countries in Asia,” he added.

Friday’s celebration followed a years-long tussle over marriage equality that culminated in the 2017 declaration by the constitutional court giving same-sex couples the right to marry, and setting a deadline of May 24 for legislation.

Marriage equality was backed by the ruling Democratic Progressive Party (DPP), but the measure could complicate President Tsai’s bid for a second term in elections next year.

Conservative groups that oppose same-sex marriage said the legislation disrespected the people’s will.

America’s de facto embassy in Taiwan called the island’s quest for equality “an inspiring journey and an example for the entire world.”

“Only in a democracy such as Taiwan‘s can human rights and civil rights be protected and nurtured,” the American Institute in Taiwan wrote on its Facebook page.

Same-sex marriage is not recognised by Hong Kong and neighbouring China, which regards Taiwan as a wayward province to be returned to the fold by force, if necessary.

It marks another milestone in Taiwan‘s development as one of the region’s more liberal societies, in contrast with China’s strongly autocratic government.

Across the strait, many Chinese congratulated Taiwan‘s newlywed same-sex couples on platforms such as Weibo, China’s version of Twitter.

“For once I thought the legalization of same-sex marriage in Taiwan would impact on the Chinese government, making them heed our appeals,” one Weibo user said.

“But then I found the shock actually makes the government more scared, stepping up their crackdown on us.”

Police are looking for information that could help locate an unidentified man regarding a case of theft from a shop, an offense that occurred...
Read more