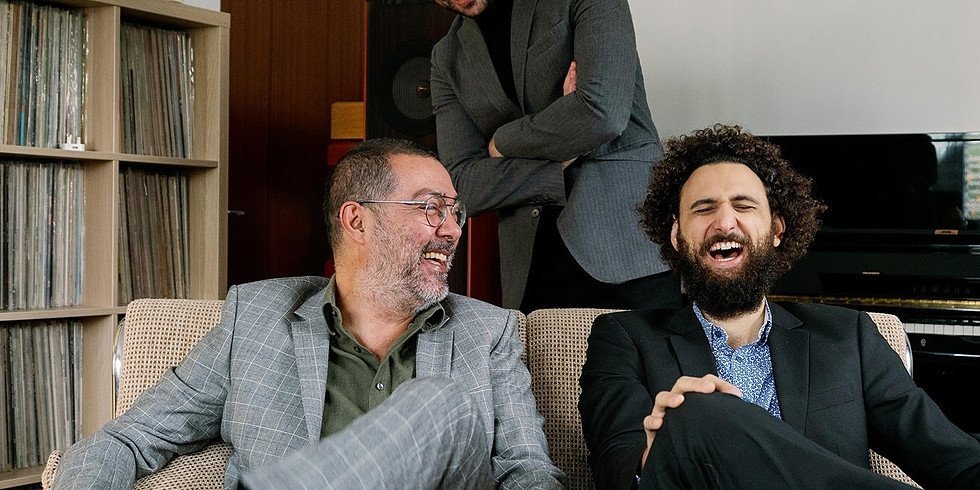 Workin’ Trio, a band formed in 2020, invite you to the garden of Technopolis 20, on Friday, October 8, at 8pm. Their music is inspired by uplifting swing jazz grooves at times blended with Gospel, New Orleans, and Boogaloo rhythms. The combination of the Hammond organ, tenor saxophone and drums creates a unique sound. The focus of the Trio is to unbury the less-known repertoire from the 1940s, 50s & 60s as well as compose original tunes within those lines.

Charis Ioannou (saxophone) was born in Nicosia, Cyprus in 1976. In 1997 he was enrolled at the Berklee College of Music in Boston, where he studied saxophone performance and Jazz Composition. Charis won the Woodwind Achievement Award in the last year of his studies in Boston and in 2001, after graduation, he moved to New York where he stayed for three years. While in New York, Charis earned his Master’s Degree in performance from the New York University and in the meantime performed and taught around the state. Charis left the United States in 2005 and moved back to Cyprus. The return to his homeland country found Charis collaborating with various musicians and appearing in all the major clubs and festivals around Cyprus as well as various venues around the world including performances in Greece, Kuwait, Germany, Lebanon, Kazakhstan, Poland, Serbia, Spain, England, Italy, Luxembourg, Belgium, Holland and the U.S.A. Charis has also collaborated with the American Embassy in Cyprus in a Bi-Communal Jazz program called Jazz Futures through which he has appealed all over Cyprus performing alongside the group of Ari Roland and Chris Byars for 6 years during the period 2007-2013. In 2015 he led BopCy, a quartet with all Cypriot musicians and won the 2nd place in the first Greek Jazz Competition held in Athens in the same year and appeared in Syros as part of the International Jazz Day 2015. Charis is currently teaching the saxophone and the jazz idiom at the University of Nicosia as well as making guest faculty appearances in workshops held in Italy, Lebanon and Greece and continuing to perform and record as a leader as well as a sideman in Cyprus and abroad.

Christos Yerolatsitis (https://christosyerolatsitis.com/) is a Cypriot pianist, keyboardist and composer. With an interest in various music genres, Christos’s music can be characterised as colourful, intuitive and diverse. Christos moved to The Netherlands in 2008 where he lived for 9 years. Soon after his arrival he got into the Dutch jazz scene and performed all around the country with well-known artists, such as Benjamin Herman, John Ruocco, Simon Rigter, Ben van den Dungen, Ben Van Gelder and others. In 2016 he appeared in the biggest theatres of the country with the “Eef van Breen Group” in cooperation with the extremely successful theatre production “Borgen”. In 2017 he moved to Mumbai where he got employed as the head of the Piano department of the True School of Music, one of India’s biggest music schools. During his stay in India, Christos has performed with many bands in music festivals and jazz clubs and shared the stage with names such as Ranjit Barot (John Maclaughlin’s drummer) and Erik Truffaz (trumpet) as well as Indian Carnatic musicians like Sabir Khan (Indian Sarangi player) and Bangalore Amrit (Indian Khanjira). Christos is currently based in Cyprus working with various international bands as a leader and a sideman.

Marios Spyrou is a professional Cypriot Jazz drummer, based in Nicosia. He completed his master’s degree in the Koninklijk Conservatorium Den Haag and followed several workshops and private lessons with many important Jazz musicians, as Eric Ineke, Joseph Farnsworth, George Fludas, Leroy Williams, Adam Nussbaum, Barry Harris and Harold Maybern. Currently he is teaching private drum lessons at the English school in Nicosia. Over the last 12 years he has been playing extensively with the top Cypriot and European jazz musicians all over the island and in other important venues around Europe (UK, Greece, Italy, Holland, Belgium).