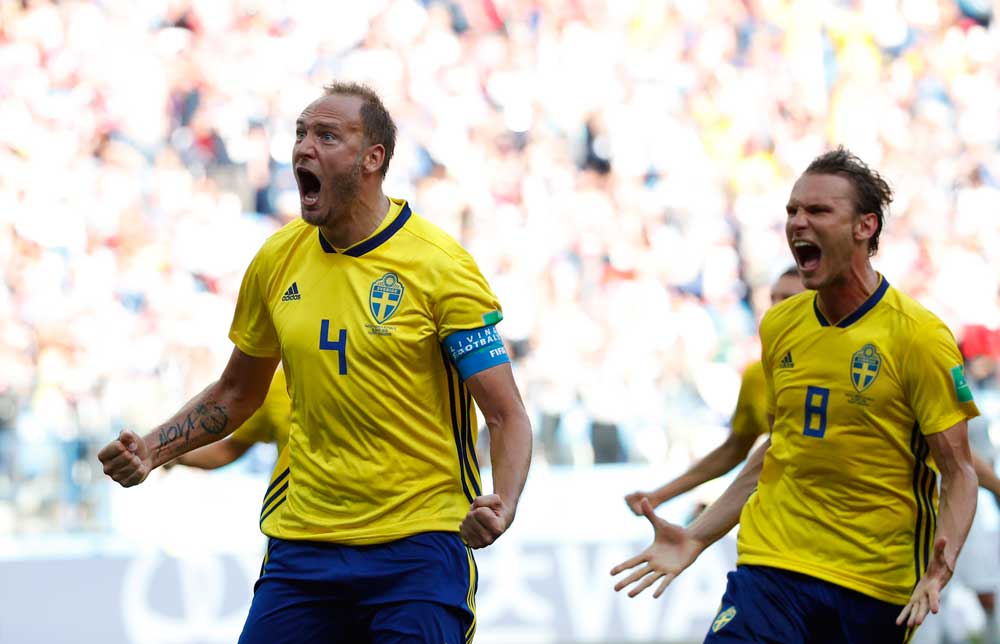 A penalty awarded through video review gave Sweden a 1-0 victory over South Korea in Nizhny Novgorod on Monday. Andreas Granqvist guessed correctly and easily converted the kick in a game that Sweden mostly dominated.
The victory was vital to Sweden. Mexico grabbed a surprise 3 points from Germany in this group Sunday, and most everyone thinks Germany will come roaring back. That leaves a narrow margin for these two teams to advance.
Sweden controlled the game for the most part, but both teams played strong defense, and a goal from open play always seemed unlikely. Perhaps Sweden missed longtime star Zlatan Ibrahimovic, a deadly finisher now retired from international play.
Sweden had 15 shots but few that really seemed likely to go in. South Korea managed just four.
In the 66th minute, Kim Min-Woo of South Korea brought down Viktor Claesson in the box. There was no immediate whistle despite the instant appeal by about four Swedish players.
A video review was called, and the pitch emptied for a minute. The penalty judgment duly came down, and few neutral observers disputed it.
Both Granqvist and keeper Cho Hyun-woo went to their rights, and the ball sailed smoothly into the net.
South Korea, which had mostly been relying on the counter attack, picked up the pace after the goal and got the ball into dangerous areas a few times. But time ran out on the game, and probably on South Korea’s Cup hopes. The team finds itself looking up at Mexico and Sweden in the group and tied with mighty Germany.
By In Cyprus
Previous articleCEB ready to do more for Cyprus’ economy, says Bank’s Governor
Next articleAfter a 36-year wait, Peru decides to enjoy itself