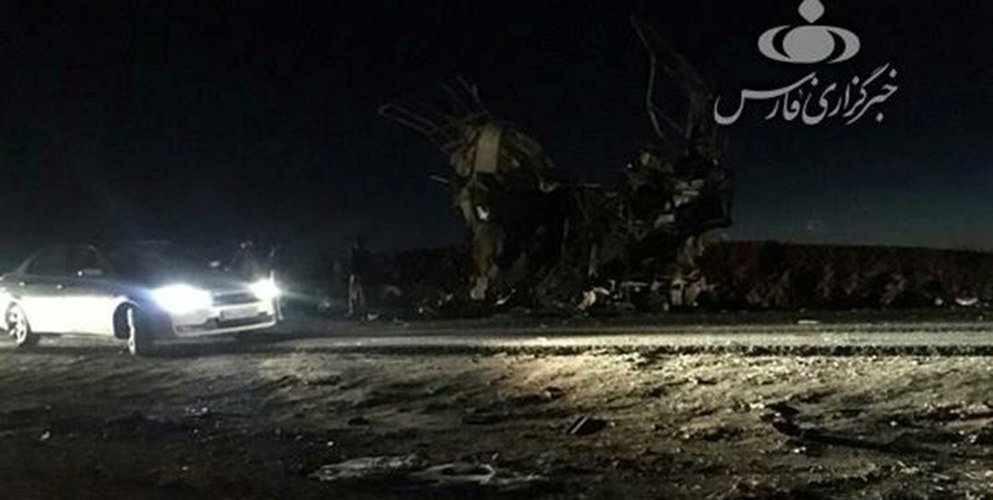 A suicide bomber killed 27 members of Iran‘s elite Revolutionary Guards on Wednesday, state media said, in a southeastern region where security forces are facing a rise in attacks by militants from the country’s Sunni Muslim minority.

The heavy losses among Iran‘s premier military force prompted a senior Revolutionary Guards commander to issue a warning to the country’s foes.

“Our response in defence of the Islamic Revolution will not be limited to our borders,” Ali Fadavi was quoted as saying by Fars.

“The enemies will receive a very firm response from the Revolutionary Guards like before.” He did not specify which enemies or what actions Tehran would take.

In the past Iran has accused its regional rival, Sunni Arab Saudi Arabia, of supporting Sunni separatist groups who have attacked its security forces. Riyadh has denied the charges.

Iran’s Shi’ite Muslim authorities say militant groups operate from safe havens in Pakistan and have repeatedly called on the neighbouring country to crack down on them.

A suicide bomber driving a vehicle laden with explosives attacked a bus transporting members of the Guards, the force said in a statement. Thirteen people were wounded.

A video posted by Fars showed blood and debris at the site of the attack on a road in a volatile area near the Pakistan border where militants and armed drug smugglers operate.

The bus was turned into a twisted pile of metal, a photo published on Fars showed. Reuters could not independently verify the image.

While Sunni militant groups are not regarded as a major threat, the attack dealt a fresh blow to Iran’s security establishment, which has often said it can repel any threat no matter how big, even from the United States and its ally Israel.

The assault in impoverished Sistan-Baluchistan province – among the worst ever on the Guards – illustrated that Iran’s elite force, which answers directly to Supreme Leader Ayatollah Ali Khamenei, can be vulnerable to guerrilla-style operations.

The Guards’ estimated 125,000-strong military, with army, navy and air units, has acted as the sword and shield of Shi’ite clerical rule in Iran since its 1979 Islamic Revolution.

The force also operates outside of Iran‘s borders in countries such as Iraq and Syria where it works with proxies to promote Tehran’s interest. It runs a business empire in Iran worth billions of dollars.

“The self-sacrificing military and intelligence children of the people of Iran will take revenge for the blood of the martyrs of this incident,” Fars quoted Foreign ministry spokesman Bahram Qassemi as saying.

Iran’s Guards fired missiles at Islamic State militants in Syria in 2017 and 2018 after the group claimed responsibility for two attacks in Tehran and Ahvaz. In 2018, the Guards launched missiles at an Iranian Kurdish armed opposition group in northern Iraq.

Wednesday’s violence comes during a month in which Iran has been commemorating the 1979 Islamic Revolution which swept the U.S.-backed Shah from power. Tehran showed off ballistic missiles in defiance of U.S. efforts to curb its military power.

On Twitter he asked: “Is it no coincidence that Iran is hit by terror on the very day that #WarsawCircus begins?”

Iran had enjoyed relative stability compared to Arab neighbours who have grappled with political and economic upheaval touched off by popular uprisings in 2011.

But economic hardships fuelled by U.S. sanctions have triggered waves of protests that sometimes call for Iran‘s clerical leaders to step down.

Twelve members of the Guards were among 25 people killed last autumn by gunmen on a military parade in the city of Ahvaz in the southwest. The Sunni Islamic State and an Arab separatist group both claimed responsibility.

Jaish al-Adl emerged as the main armed opposition movement in the southeast after members of another Sunni group, Jundullah, joined it after their leader was captured on a plane in 2010. He was tried and executed.

“The crime will remain as a ‘dirty stain’ in the black record of the main supporters of terrorism in the White House, Tel Aviv and their regional agents,” Rouhani said.

Apart from Israel, Rouhani did not name the regional states he believed were to blame. Mainly Shi’ite Muslim Iran does not recognise Israel, which is a key U.S. ally in the region and sees Tehran as posing an existential threat to its existence.

In the past, Tehran has accused its main regional rival Saudi Arabia of backing Sunni militia groups who have carried out bloody attacks against Iranian security forces. Riyadh has denied the charges.

Repeating warnings made by senior commanders of the Guards, Rouhani said Iran was determined to bring justice to those responsible for one of the worst assaults ever against the Revolutionary Guards in years.