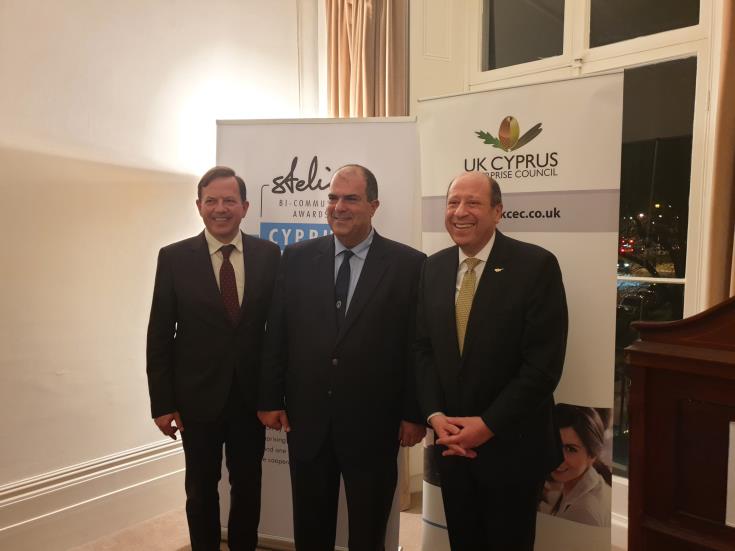 An event co-organised in London by the Foundation of Sir Stelios Haji-Ioannou and the UK-Cyprus Enterprise Council (UKCEC) highlighted the significance on bi-communal collaboration in delivering the reunification of Cyprus.

The event was held at the Stelios Philanthropic Foundation’s new headquarters in the British capital, to celebrate 11 years of the Stelios Cyprus Bi-Communal Awards given to selected projects carried out by teams of Greek and Turkish Cypriots working together.

Around 70 distinguished members of the Cypriot community in the UK attended, representing all the island’s ethnic communities

Referring to his Foundation in a brief address, Sir Stelios said he decided to set it up more than ten years ago because he wanted to give something back and make a difference to the societies of the countries that he has lived in over the years, namely Cyprus, Greece and the UK.

He recounted how the idea of supporting bi-communal projects back then was considered to be “novel”. But 11 years on, added Sir Stelios, “we have given €3.75m in total, in small sums of around €10,000 to each team comprised by Greek and Turkish Cypriots.”

He added that the teams that have benefited from the Foundation’s donations are not only entrepreneurial ones, but also come from the arts, science, crafts and sports.

The founder and Chairman of the Board of UKCEC Peter Droussiotis stressed that it was “an all-Cypriot event”, bringing together Cypriots of all ethnic communities. He said that bi-communal collaboration in enterprise is needed in order to deliver lasting peace in Cyprus.

“An all-Cypriot movement is bound to have real impact”, added Droussiotis, expressing his delight that such a movement was inaugurated ten days ago in London, with the participation of UK Cypriots of all ethnic backgrounds.

“Cypriots in the UK are not hampered by the division in the island and prove they can work together,” added the UKCEC chairman.

He outlined the multiple benefits from Cyprus’ reunification and praised Sir Stelios Haji-Ioannou for his efforts to bring the communities closer together.

The High Commissioner of Cyprus to the UK Euripides Evriviades paid “a tribute to the people of Cyprus as a whole”. He also referred to the vision of Sir Stelios, adding that Cypriots are proud of what he has been doing.

The Cypriot Lawyers’ Society in the UK co-founder Kerim Fuad QC referred to his and his colleagues’ efforts to bring Greek and Turkish Cypriot solicitors together. He added that the integrity of the legal system in Cyprus must be “a top priority” for a smooth function of a reunified state.

The former UK High Commissioner to Cyprus Peter Millet described the continuing division of a full EU member-country as “unacceptable” and said that the role of the Stelios Philanthropic Foundation with which he now works, is “to build trust and reconciliation.”

Fadi Suleiman, a successful Turkish Cypriot entrepreneur in London, spoke movingly of the prospect of all Cypriots leaving and working peacefully together, “as they do in London”, and thanked Sir Stelios for his “extremely good” work.