State Department: US committed to engaging with partners in Eastern Mediterranean to uphold stability 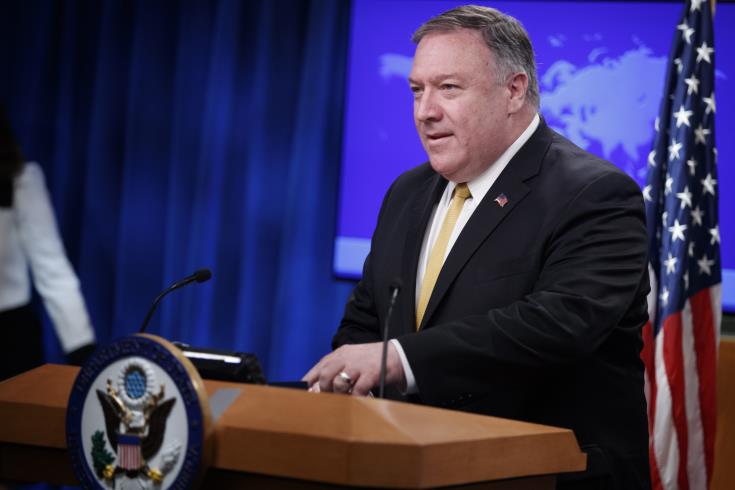 Τhe Republic of Cyprus is a force for stability, democracy, and prosperity, and a valued U.S. partner in the important Eastern Mediterranean region, a Senior State Department Official has said during a briefing via teleconference on Secretary Pompeo’s travel to Ukraine, Belarus, Kazakhstan, Uzbekistan, and Cyprus.

We work together with Cyprus on a wide range of issues, including combating money laundering, fighting terrorism, enhancing maritime and border security, and the United States is committed to engaging with our allies and partners in the Eastern Mediterranean – of course, including the Republic of Cyprus – to uphold stability and prosperity in the region, he noted.

The Senior State Department Official he referred to the meetings Pompeo will have in Cyprus. The Secretary while in Nicosia, he will meet with the President and Foreign Minister and reaffirm the robust U.S.-Republic of Cyprus relationship, he explained and added that Pompeo will also meet with Turkish Cypriot leader Akinci, and “will reaffirm to leaders of both communities continued U.S. support for the UN-facilitated, Cypriot-led efforts to reunify Cyprus as a bi-zonal, bicommunal federation in line with UN Security Council resolutions.”

He further noted that the US is proud of a very long history of strong people-to-people ties with Cyprus. More than 6,000 business, political, and cultural leaders from both communities have studied in the United States since 1960, he said.  The Senior State Department official pointed out that Secretary Pompeo has worked to strengthen these ties, including by participating in a high-level engagement of the 3+1 group – that’s the Republic of Cyprus, Greece, Israel, and the United States – to advance multilateral cooperation.  “So, we’re looking forward to building on these successes as we continue to collaborate with the Republic of Cyprus on shared priorities”, he finally said.