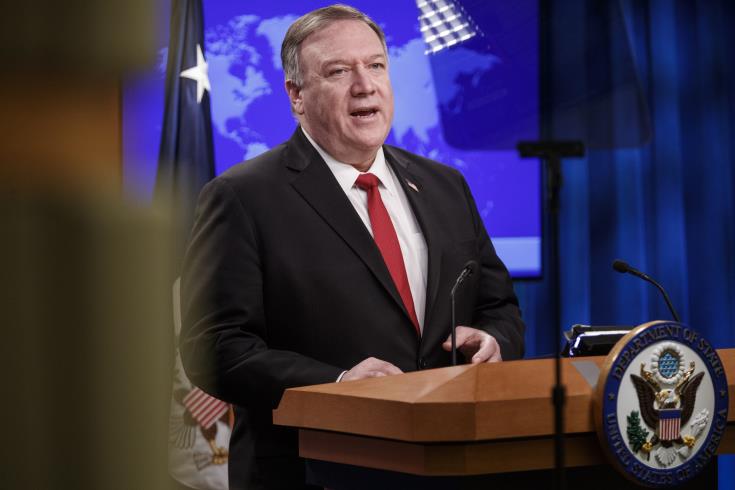 The State Department has issued its 2019 Country Reports on Human Rights Practices in Cyprus by repeating its well-known position that since 1974 the southern part of Cyprus has been under the control of the government of the Republic of Cyprus and the northern part of Cyprus is administered by Turkish Cypriot.

It notes that the northern part proclaimed itself the “Turkish Republic of Northern Cyprus” (“TRNC”) in 1983 but underlines that the United States does not recognize the “TRNC,” nor does any country other than Turkey.

The report, presented by Secretry of State Mike Pompeo on Wednesday, further underlines that a substantial number of Turkish troops remain on the island. A buffer zone, or “Green Line,” patrolled by the UN Peacekeeping Force in Cyprus (UNFICYP), separates the two sides while the report is divided into two parts: The Republic of Cyprus (below), and the area administered by Turkish Cypriots.

It is executive summary, the report indicates that the Republic of Cyprus is a constitutional republic and multiparty party presidential democracy.

Regarding Torture and Other Cruel, Inhuman, or Degrading Treatment or Punishment, it says although the constitution and law prohibit such practices, there were reports in previous years, however, that police at times engaged in abusive tactics and degrading treatment of suspects and detainees. Members of ethnic and racial minorities were more likely to be subjected to such treatment.

According to the report, physical conditions in some prison and detention centers, including detention centers for asylum seekers and undocumented migrants pending deportation, did not meet international standards.

Regarding Internally Displaced Persons, the report says the government “considers Greek Cypriots displaced as a result of the 1974 division of the island to be refugees, although they fell under the UN definition of internally displaced persons.”

On Access to Asylum, it says the law provides for granting asylum or refugee status, and the government has established a system for providing protection to refugees.

Furthermore, it adds the government also provided temporary protection, called subsidiary protection, to individuals who may not qualify as refugees.

There were incidents of violence against Turkish Cypriots traveling to the government-controlled areas as well as some incidents of verbal abuse or discrimination against non-Greek Cypriots. On July 10, Turkish Cypriot leader Mustafa Akinci reported to the UN secretary-general’s special representative in Cyprus that a Turkish Cypriot tourist bus driver was harassed by Greek Cypriots at Larnaca airport and called for a proper investigation. President Anastasiades instructed police to investigate the complaint, which continued at year’s end.

It further makes reference to National Guard captain Nicos Metaxas confessed to police that he killed five female foreign domestic workers and two girls from the Philippines, Romania, and Nepal between 2016 and 2018. Metaxas reportedly met the victims via an online dating website.

Local press reported police did not investigate reports that the victims were missing, assuming they had either crossed into the area administered by Turkish Cypriots or were working illegally in the government-controlled area. Minister of Justice and Public Order Ionas Nicolaou resigned, and President Anastasiades fired Cyprus National Police Chief Zacharias Chrysostomou over police handling of the reports. On June 24, a court sentenced Metaxas to seven terms of life imprisonment. New Cyprus National Police chief Kypros Michaelides publicly apologized to the families of the victims.