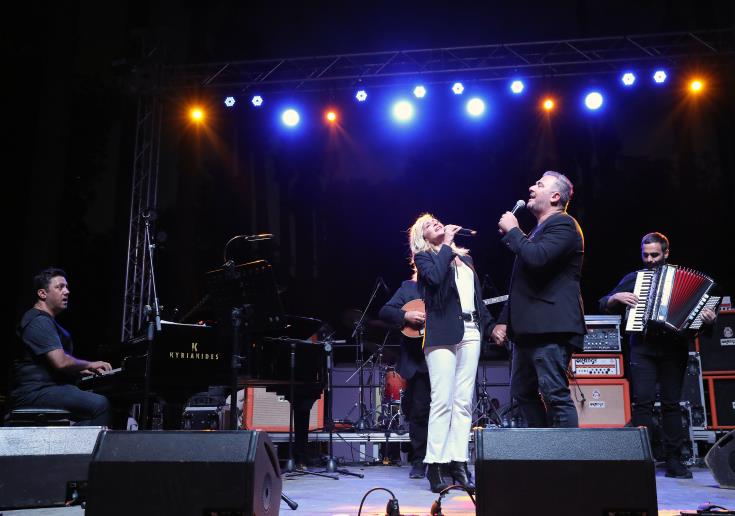 Popular Greek singers Antonis Remos and Anna Vissi joined Cypriot bands in a concert on Tuesday night in Nicosia, to support the victims of last week’s deadly fires in Attiki, Greece, in the framework of media campaign #StandByGreece.

The concert, under the auspices of Commissioner for Volunteerism Yiannis Yiannaki, attracted thousands of citizens. The singers sang free of charge and the concert was open to the public. There were collection stands for donations and all proceeds will be given to rebuild public interest infrastructure and support the children in the fire-stricken areas.

The concert began with Greek singer Antonis Remos, Cypriot singer Anna Vissi and Cypriot composer and producer Giorgos Theophanous, along with other musicians, signing “Chrysoprasino Fyllo” (Golden-Green Leaf), which is a song about Cyprus. The lyrics were written by Leonidas Malenis and the music by Mikis Theodorakis.

The bands that performed at the concert were Theo & Alex, OnTour, Cashiers (Band), Neon Knights, The Boots, and Fuse.

Anna Vissi and Antonis Remos were received earlier on Tuesday by President Nicos Anastasiades, who expressed deep sorrow for the events of the past days in Greece.

He also called on everyone to support the campaign organised by the media, including CNA, banks, NGOs, businesses, private persons, and the organisation Hope for Children, under the auspices of the Commissioner for Volunteerism, and thanked all the singers for their contribution.

Vissi said she was touched and proud that Cyprus and its media were organising such an event. Remos said he was blessed and thanked the Cypriots for their love.

By In Cyprus
Previous articleUkraine in focus as Manafort trial in U.S. heads to second day
Next articleTop August Festivals in Cyprus