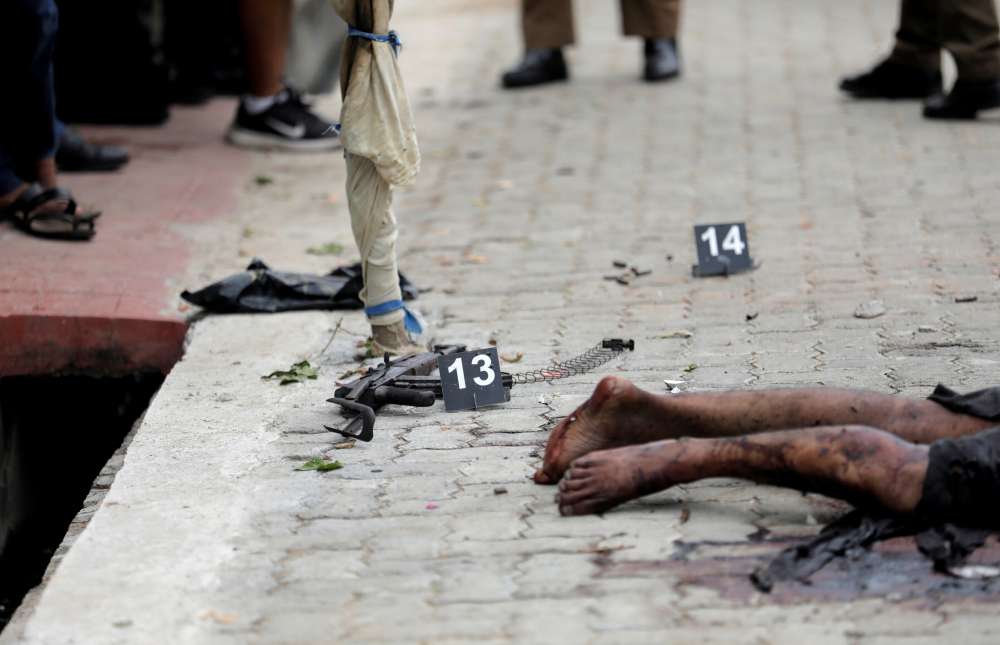 Sri Lankan police arrested 23 people on Tuesday in connection with a spate of attacks on Muslim-owned homes and shops in apparent reprisal for the Easter bombings by Islamist militants that killed more than 250 people.

Soldiers in armoured vehicles patrolled the towns hit by sectarian violence this week as residents recalled how Muslims had hid in paddy fields to escape mobs carrying rods and swords, incensed over the militant attacks.

The April 21 attacks, claimed by Islamic State, targeted churches and hotels, mostly in Colombo, killing more than 250 people and fuelling fears of a backlash against the island nation’s minority Muslims.

Mobs moved through towns in Sri Lanka’s northwest on motorbikes and in buses, ransacking mosques, burning Korans and attacking shops with petrol bombs in rioting that began on Sunday, Muslim residents said.

Police said they arrested 23 people from across the island for inciting violence against Muslims, who make up less than 10 percent of Sri Lanka’s 22 million people who are predominantly Sinhalese Buddhists.

Police spokesman Ruwan Gunasekera said the situation is under control and no new incidents had been reported on Tuesday.

The lone fatality was a man killed while trying to protect his home from attack.

When mobs arrived in the Kottramulla area on Monday evening, Mohamed Salim Fowzul Ameer, 49, went outside while his wife, Fatima Jiffriya, stayed with their four children.

Jiffriya, 37, then heard shouts and sounds of fighting.

“I opened the door to see my husband on the ground in a pool of blood, the police right in front and the mob running,” she said.

“His heart was still beating hard, I took him into my lap and started to scream for help,” she added, her voice breaking, as women consoled her children at an uncle’s house ahead of Ameer’s burial.

Sri Lanka has had a history of ethnic and religious violence and was torn for decades by a civil war between separatists from the mostly Hindu Tamil minority and the Sinhala Buddhist-dominated government.

In recent years, Buddhist hardliners, led by the Bodu Bala Sena (BBS) or “Buddhist Power Force”, have stoked hostility against Muslims, saying influences from the Middle East had made Sri Lanka’s Muslims more conservative and isolated.

Last year, scores of Muslim mosques, homes and businesses were destroyed as Buddhist mobs ran amok for three days in Kandy, the central highlands district previously known for its diversity and tolerance.

Residents in the town of Kottampitiya recalled how a group of about a dozen people had arrived in taxis and attacked Muslim-owned stores with stones just after midday on Monday, with the mob soon swelling to 200, and then 1,000.

“The Muslim community huddled in nearby paddy fields, that’s how no one died,” said one of a group of men gathered outside the white-and-green mosque with smashed windows and doors.

Abdul Bari, 48, told Reuters his small brick shop had been burned down with a petrol bomb. “The attackers were on motorbikes, armed with rods and swords,” he added.

Others blamed the police for failing to disperse the crowd.

“The police were watching. They were in the street, they didn’t stop anything. They told us to go inside,” said Mohamed Faleel, 47, who runs a car paint business.

“We asked police, we said stop them. They didn’t fire. They had to stop this, but they didn’t,” he added.

Police spokesman Gunasekera rejected allegations that police had stood by while the violence unfolded. He said the perpetrators would be punished.

“All police officers have been instructed to take stern action against the violators, even to use the maximum force. Perpetrators could face up to a 10-year jail term,” he said.

A police source said seven of those arrested for the violence in Kottampitiya were young Sinhalese men from nearby Buddhist villages.

“They were leading the charge yesterday. They were instructing people on which stores to attack,” said the police source.

The men said they were seeking revenge for the militant attack in the city of Negombo, where over 100 people were killed at the St. Sebastian’s Church during Easter prayers, the police source said.

A court remanded the men to police custody on Tuesday. They could not be reached for comment.