Spokesman: Nicosia ready for substantial discussion on terms of reference for talks 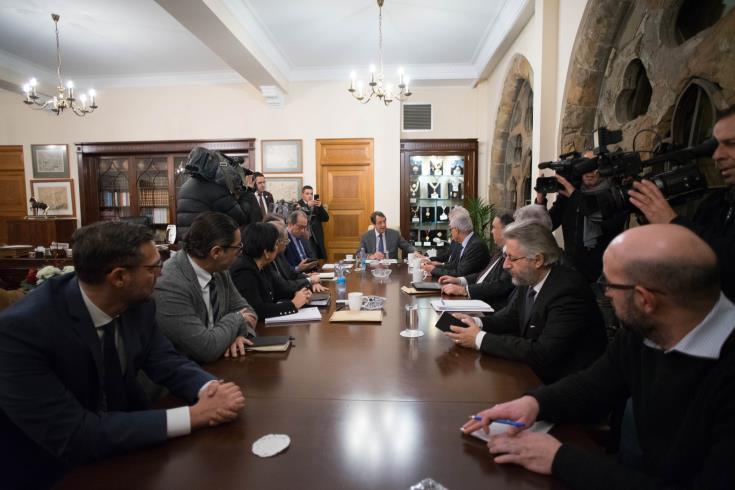 Nicosia is ready to embark on a substantial discussion regarding the terms of reference with the UN Secretary General’s envoy, Jane Holl Lute, Government Spokesman Prodromos Prodromou said on Monday.

He was speaking after a meeting of the negotiating team for the Cyprus problem under President Nicos Anastasiades at the Presidential Palace, which lasted for about one hour and a half.

Prodromou said the President had a working meeting with the negotiating team, ahead of Lute’s arrival to Cyprus this weekend and the contacts that will take place in order to formulate the terms of reference for the resumption of Cyprus talks.

“The President informed them on Lute’s arrival, heard their thoughts and exchanged views with the members of the team. Certainly, our side is ready for the substantial discussion of the terms of reference, that will start with Lute,” he said.

In relation to the possibility of a joint meeting with the two sides in Cyprus, Prodromou said he could not say in advance whether the UN envoy will have one or more meetings. “We know that Lute will stay in Cyprus for a few days, about 3-4 days. Therefore, she has the time to go ahead with her mission the way she wants us to proceed,” he added.

The Government Spokesman was also asked if Lute was going to present any ideas to speed up the process. He replied that he was neither willing, nor could say in advance how the UN envoy will act. “It is her mission. Until now, cooperation with Lute during the two previous meetings was very substantial, very productive, as the President of the Republic has said,” the Spokesman noted.

Replying to a relevant remark, Prodromou said moreover that “we have not exceeded any timeframe. On the contrary, the goal was to formulate the terms of reference the soonest possible and in case all sides show their readiness, i.e. the Turkish side as well, we will be able to conclude the terms of reference. Indicatively, it was said that this could be done by the end of the year. We are still before the end of the year” he noted.

Asked about the way forward, Prodromou said that “the desire, the will and the position of the UN Secretary-General, after a reflection period, was to start again with the negotiations.” This, he went on, is very important for us, because our pursuit is to negotiate and to solve the Cyprus problem.

“It is already positive that Guterres has activated a procedure with a view to resume [talks]. However, this time the Secretary-General takes care that negotiations will create the expectation of being able to reach an outcome, taking into account the precedent with the deadlock in Crans-Montana due to the intransigence of Turkey at the final stage,” he said.

This time, he added, with the terms of reference, the Secretary General seeks a solid foundation that will commit all sides involved to actually negotiate a Cyprus solution, on the basis of decisions, UN resolutions” and to negotiate what’s really at stake, that is Cyprus to get rid of foreign troops, the Turkish occupation army and interventions, and become a normal state, as the UN Secretary-General himself has envisioned.

The meeting was attended by all members of the group supporting the Greek Cypriot negotiator, with the exception Akel which did not participate.

According to information from the Presidential Palace, Lute is expected to arrive in Cyprus in the early hours of Saturday, December 15, and it is possible to start her contacts on the island on Sunday.

By In Cyprus
Previous articleScattered showers, with snow or sleet possible in the mountains
Next articleFire service called in to remove uprooted trees in Limassol, Paphos