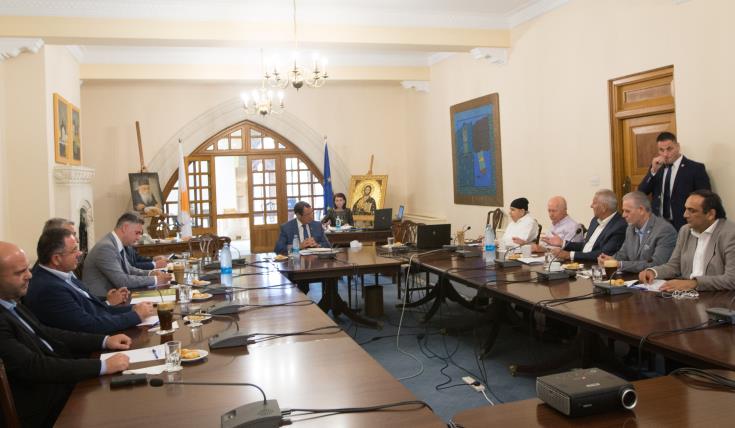 Government Spokesman Prodromos Prodromou has reiterated that the government wishes and expects UN Secretary General Antonio Guterres’ initiative in order for negotiations on the Cyprus problem to resume from where they left off in the Swiss resort of Crans – Montana in the summer of 2017.

Prodromou was replying to journalists’ questions after a meeting at the Presidential Palace with parliamentary party leaders chaired by President Nicos Anastasiades.

“There is no discussion on the process,” he clarified. The discussion has to do as to whether the state of play and positions by all the parties involved are conducive to the resumption of negotiations, he added.

The Spokesman said that President Anastasiades had briefed party leaders in detail of the meeting he had with Guterres’ envoy Jane Holl Lute as well as on recent developments in general on the Cyprus problem.

Therefore, Lute has specifically asked to find out what the positions of the Greek Cypriot side is, he added.

He pointed out that the President’s reply is known that is to say that “our side is ready and willing for a resumption on the basis of the Guterres framework and always, off course, on the basis of UN decisions and resolutions for a solution of a bicommunal, bi-zonal federation.”

Replying to another comment he noted that Lute posed questions in order to find out what the position of each side is at this moment.

“Our side’s position, independently from any other discussion by anyone else, is that yes, we wish and expect the Secretary General to take the initiative for the resumption of negotiations at the point where we had reached in the context of UN procedures,” the Spokesman noted. UN procedures are known. And for the Cyprus problem the procedure has been agreed for years now, he added.

Replying to a question about the meeting Lute had with Turkish Foreign Minister Mevlut Cavusoglu, Prodromou said that “we were briefed that she had a meeting with Cavusoglu.” It was an expected development and in the immediate future depending on planning and feasibility she is set to have meetings in Ankara, Athens, London and Brussels, he added.

According to the Spokesman it is expected that until September Lute will conclude her visit in the area.

On our part, he noted, we now wait to hear from the UN.

Asked what will happen if negotiations do not resume, Prodromou said that “we will deal with this eventuality if it takes place.”

Right now, he added, our side’s position is absolutely positive, in accordance precisely with what the Secretary General expects and we are waiting to see the other side’s position, the Turkish Cypriot side’s and also due to the special weight it carries Turkey’s position.

Cyprus remains divided since the 1974 Turkish invasion of the island. Numerous UN-backed talks, aiming at reunifying the island under a federal roof, have failed to yield any results. The latest round of peace talks that took place in July last at the Swiss resort of Crans-Montana ended inconclusively.