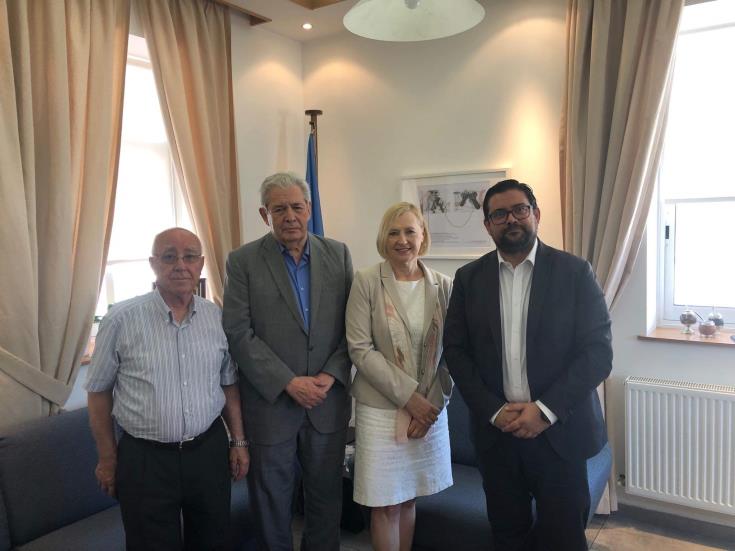 Special Representative of the Secretary-General (SRSG) in Cyprus and Head of UNFICYP Elizabeth Spehar held a meeting on Friday with a delegation of the Famagusta Municipality, headed by Mayor, Alexis Galanos, expressing the UN’s commitment to the UNSC resolutions on Famagusta.

According to a press release by the Famagusta Municipality, the delegation gave Spehar a copy of the memorandum submitted to the Cypriot President on the 28 June 2019, and discussed with her about developments regarding Famagusta and particularly reports on the opening of the enclosed city as well as the expected role of the United Nations.

Spehar reiterated the United Nations’ commitment to the resolutions on Famagusta and informed the Municipality`s delegation that her office is closely following developments, although there is no official information on any movements of the Turkish Cypriot side.

The press release says that she stressed that the United Nations goal is the return of Famagusta, which is sealed by the binding resolutions of the UN Security Council, as well as the resumption of the Cyprus talks in order to reach a comprehensive solution to the Cyprus problem.

The announcement adds that it has also been stressed that no deviation from the spirit and legitimacy of UN resolutions will be accepted as there is a great sensitivity on this issue by the United Nations.

The press release also notes that it was said that her office will be in contact with the Municipality of Famagusta in the event that there are any developments on the issue and that the United Nations closely follow the issue.

Other members of the municipality delegation who took part in the meeting were Deputy Mayor and AKEL representative Chrysanthos Zannettos and DISY representative Costakis Hadjikakou.

Cyprus President Nicos Anastasiades sent on June 26 a letter to the UN Secretary General Antonio Guterres, in which he explains that the plans announced recently in the Turkish occupied areas of Cyprus, concerning Varosha, constitute part of Turkey’s plan B, after the deadlock at the Conference on Cyprus in Crans-Montana.

On June 28 the President received a delegation from the Turkish-occupied Famagusta Municipality, which handed over a memorandum, expressing concern about the possible opening of the city for Turkish settlement and the country’s permanent division. At the same time, people gathered outside the Presidential Palace, protesting against plans pertaining to Famagusta, announced recently by Turkish Cypriot politicians, while asking the government to prioritize the return of the city to its owners.

The memorandum also calls on the UN Secretary-General to work for the implementation of the relevant resolutions and asks the government to protest to the EU and all international fora the effort to extent Turkey’s invasion on the island.