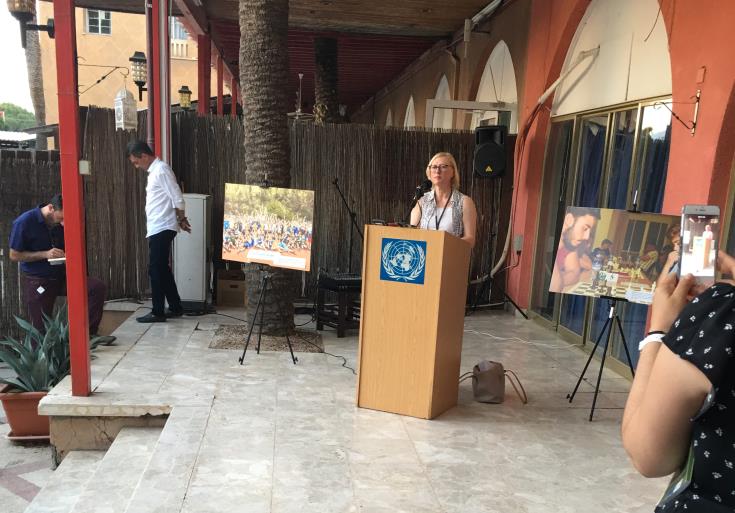 “The SG also firmly believes this and in his recent report on his Good Offices mission, he urged the leaders to consider supporting existing bicommunal initiatives, including to help mobilise public support for and involvement in the peace process”, Spearh noted.

She went on to say that “the past year hasn’t been easy for those of us who want to see a comprehensive settlement of the Cyprus problem. However, seeing you all here I am also certain that you are not giving up”, she said addressing the representatives of the civil society from both communities of the island attending the event.

“As we’ve seen in so many peace processes around the world for a process to be sustainable it means to be inclusive,” she noted and expressed the UN’s hope that in the event the talks on the Cyprus problem resume, the negotiations will include outreach to civil society, including women, to ensure a more durable outcome.

We want to celebrate your accomplishments and what you are trying to do to take this process forward, she added.

She noted that this month marks the first anniversary of UNFICYP’s NGO networking across the island, adding that the NGO Networking Group was established to enable NGOs connect across the island with like-minded groups.

“We are hoping that this initiative not only brings people in from the capital but we think that the conversation and the dialogue needs to go much beyond and we really hope to see more and more people who are coming from other parts of the island,” the UNSG’ Special Representative said.

Spehar noted that in this past year there have been so many good examples of cooperation across the divide, adding that we need to have more.

She referred to the AHDR Imagine Project, under the auspices of the Technical Committee on Education, funded by the German government, which has given 50 groups of children and teachers an opportunity to meet for the first time, stressing that these things count.

Spehar also referred to other activities of collaboration in different parts of the island, underlining that UNFICYP and the UNSG’s  Good Offices mission in Cyprus “are committed  to enhancing our partnerships with you, committed to engage increasingly with communities across the island.”

We are trying to support your efforts to go beyond the current physical but also psychological divide, she stressed.

She noted that UNFICYP has put more of its civilian staff out into the field to work more closely with local communities. She added that two civil affairs officers, both Cypriots, will be in Pyla in the next few weeks and one of their prime activities will be to support intercommunal initiatives.

The process of moving ahead on this island requires new and lasting partnerships, Spehar also noted, underlining that the UN will continue to try to do its part to support the will of the Cypriots towards the goal of a united Cyprus. “But we really need your contribution as well. It is essential,” she concluded. Approximately 50 NGOs from both communities were invited to attend the event.

Cyprus has been divided since 1974, when Turkish troops invaded and occupied 37% of its territory. The latest round of UN-peace talks, last year, at the Swiss resort of Crans-Montana ended without an agreement. Talks held under the auspices of the UN aim at reunifying Cyprus under a federal roof.

By In Cyprus
Previous articleEU Commission: Increased fiscal risks due to uncertainties over CCB sale
Next articleWoman dies in fall at Liopteri home