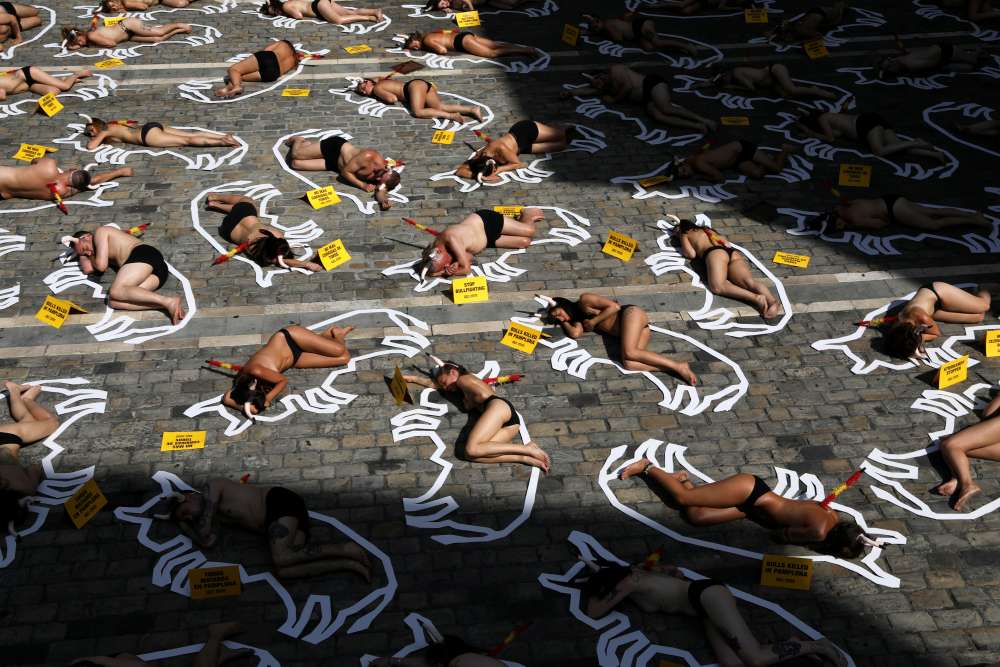 Dozens of half-naked protesters lay on the street with fake spears jutting from their backs on the eve of the Spanish festival of San Fermin on Friday, in a recreation of the technique used to weaken bulls in a bullfight.

Ahead of the festivities in Pamplona, in which hundreds of people run from specially-bred bulls through narrow streets, the demonstrators were highlighting what they see as animal cruelty.

The activists from AnimalNaturalis, which organised the demonstration with another animal rights group PETA, taped the outlines of bulls on the floor as police would in a crime scene.

“Supporting the bull runs is the same as supporting bullfighting, as the same bulls that run in the mornings will later be tortured and killed in the bullring,” said Aida Gascon, spokesperson for AnimalNaturalis.

Gascon said many people believe the bulls are put out to pasture after the run whereas in fact they are included in bull fights and killed in the ring later the same day as part of the festivities.

One of several bull running fiestas held around Spain every year, San Fermin was made famous when it featured in U.S. author Ernest Hemingway’s novel “The Sun Also Rises”.

The week-long San Fermin festival hosts over a million people each year and involves traditional shows and events, though it is mostly known for the daily bull run which ends at the Pamplona bull ring.

Proponents of bullfights say the fights and runs are a central part of the festivities, putting Pamplona on the global stage and bringing millions of euros into the city every year.

“They don’t stop to think … about the economic aspect. Pamplona lives off San Fermin. A lot of locals count on that week to sustain themselves for the rest of the year,” said 44-year-old bullfighter Angel Gomez Escorial.