Spain and accidental coach Eke it out 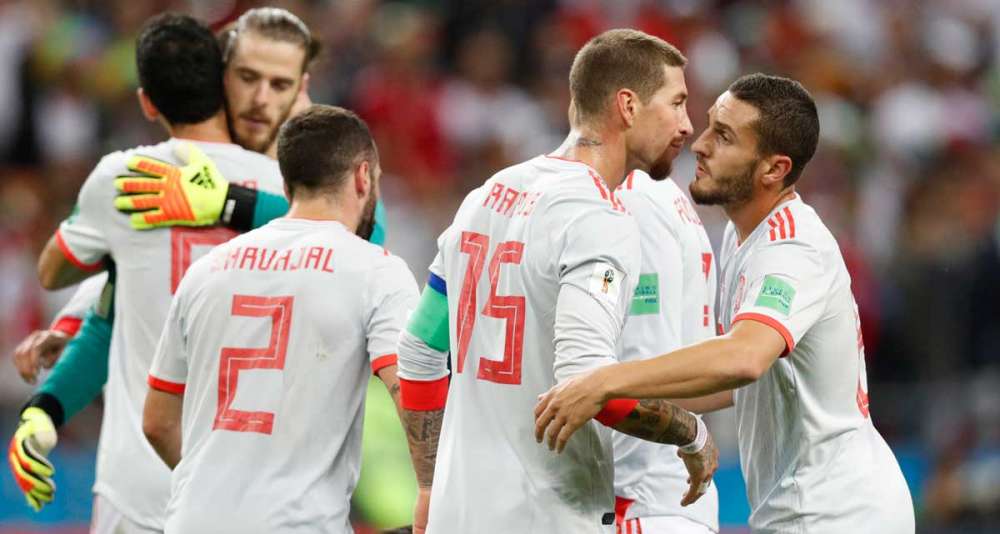 Fernando Hierro and Carlos Queiroz need no reminders about the hazards of being a soccer coach.

In his 14 years as a key player at Real Madrid, Hierro went through 14 coaching changes and the final one cost him his spot with the club in 2003 — even though the incoming coach said he lobbied hard to keep Hierro around.

That coach was Queiroz, a velvet-voiced Portuguese native who ended up lasting only one season in the bottom-line world of Real.

On Wednesday night in Kazan, Hierro and Querioz meet again in much more improbable circumstances, as Spain defeated Iran, 1-0, to take a share of the lead in Group B with Portugal.

Queiroz has coached Iran for more than seven years; Hierro has coached Spain for just seven days. Named to replace Julen Lopetegui just 48 hours before Spain’s opening match against Portugal in Russia, which ended in a 3-3 draw Friday, he has been asked to lead one of the tournament’s leading contenders on a deep run toward a title. He was given almost no notice he would get the job. He has received plenty of advice on how to do it.

“Everybody who has been playing football for a long time knows that football always gives us surprises,” Queiroz said on the eve of the pivotal Group B match between the two teams. “But it’s sort of ironic to me as well, because I fought hard to keep Hierro as a player and now he’s going to be my opponent.”

The new coach prevailed in this case but not without serious difficulty. Iran took a relentlessly defensive approach in the first half, often defending near its own goal with all 10 field players. That worked until Spain scored in the 54th minute, when Andres Iniesta, the midfielder who has unlocked so many defenses for Spain through the years, broke free and found Diego Costa just inside the box.

Costa spun, tapped the ball with his left foot as Iranian defender Ramin Rezaeian closed the gap and struck the ball full force with his right foot. It then ricocheted off Costa and past the diving Iranian goalkeeper, Ali Beiranvand.

Down a goal, Iran shifted to a more balanced attack and seemed to tie the score on a goal by Saeid Ezatolahi — only to have it disallowed by an offside call that was confirmed by the video-review system being used at the World Cup for the first time.

Still, Iran continued to win duels and pose a threat, and in the 82nd minute, Vahid Amiri even outfoxed Gerard Pique, the star Spanish defender, and fired a cross into the penalty area that Medhi Taremi headed just over the Spanish goal.

That was it for Iran but because it won its first game, against Morocco, it can still reach the knockout round by defeating Portugal in its final group game.

It has been a solid World Cup for Queiroz, who is 65 and was born in Mozambique when it was still a Portuguese colony and has now seen plenty of the world through soccer. He has coached teams on four continents, including the MetroStars in the United States, Nagoya Grampus Eight in Japan and both the South African and Portuguese national teams. He also spent two periods as an assistant under Alex Ferguson at Manchester United.

But even Queiroz has never experienced anything quite like Hierro’s situation, which was created when his predecessor agreed to become Real Madrid’s latest coach without informing Spanish federation President Luis Rubiales until minutes before the announcement.

Rubiales, neither amused nor philosophical, fired Lopetegui as fast as he could after consulting with the players and then recruited Hierro, the national team’s technical director, who was already on site in Russia, to be his replacement. One could argue that it was a spiteful move by Rubiales, but it is now much too late to argue.

“I came here with a suit and now I’m in a track suit,” Hierro told Spanish reporters this week.

It is, no doubt, a tricky situation, but it is not necessarily a losing proposition. Spain remains one of the favorites here with a powerhouse team and a playing style that effortlessly bends games to its will.

But if Spain does falter, Hierro is not going to be the one who gets the bulk of the blame. In that sense, the pressure on him is diminished.

One of the few who knows what he is going through from personal experience is Steve Fisher, who became Michigan’s interim basketball coach just before the start of the 1989 NCAA Tournament.

Fisher was an assistant under Bill Frieder when Frieder confirmed the rumors that he had accepted a job for the following season at Arizona State. Like Lopetegui, Frieder was not allowed to see his initial mission through. Bo Schembechler, then Michigan’s football coach and athletic director, made the decision and — shades of Rubiales — said: “A Michigan man will coach Michigan.”

Fisher and Michigan went on to win the title and nearly 30 years later they have provided some comfort to Spain. After Lopetegui’s firing, defender Gerard Pique tweeted a reference to Michigan’s run, an unmistakable message that he, at least, believed the team could overcome the unusual circumstances it finds itself in.

Now for the modern-day caveats:

— Fisher, a former high school basketball coach and a longtime assistant, had a lot more coaching experience than Hierro, 50, whose only head job at any level was one season with the Spanish second-division club Oviedo.

— Everybody still thinks Spain has a chance to win the World Cup.

“One of the serious candidates,” Queiroz said Tuesday. “It’s very difficult to beat them because they manage to control the ball and the tempo, and they have a very special style.”

One that Hierro does not intend to tinker with. Even if all of his players were not in complete agreement, Lopetegui constructed the Spanish attack around forward Diego Costa. And there has been no arguing with the results. The team has not lost in nearly two years, since the round of 16 of the European Championship in 2016 to Italy.

“I’m going to be very clear and honest,” Hierro said. “I know I’m the coach because of the circumstances, not because of my coaching résumé. If you looked objectively at my résumé, it would be difficult for me to be the coach of the national team.”

He sees his role as more motivational than tactical but that may depend on how the next games go. What is clear is that he will have no shortage of advice from all sectors of Spanish society. He said he already had rejected suggestions from the national media that it was time to bench goalkeeper David de Gea, whose blunder cost Spain a goal in its opening tie against Portugal.

“He’s one of the two or three best goalkeepers in the world,” Hierro said. “We trust him.”