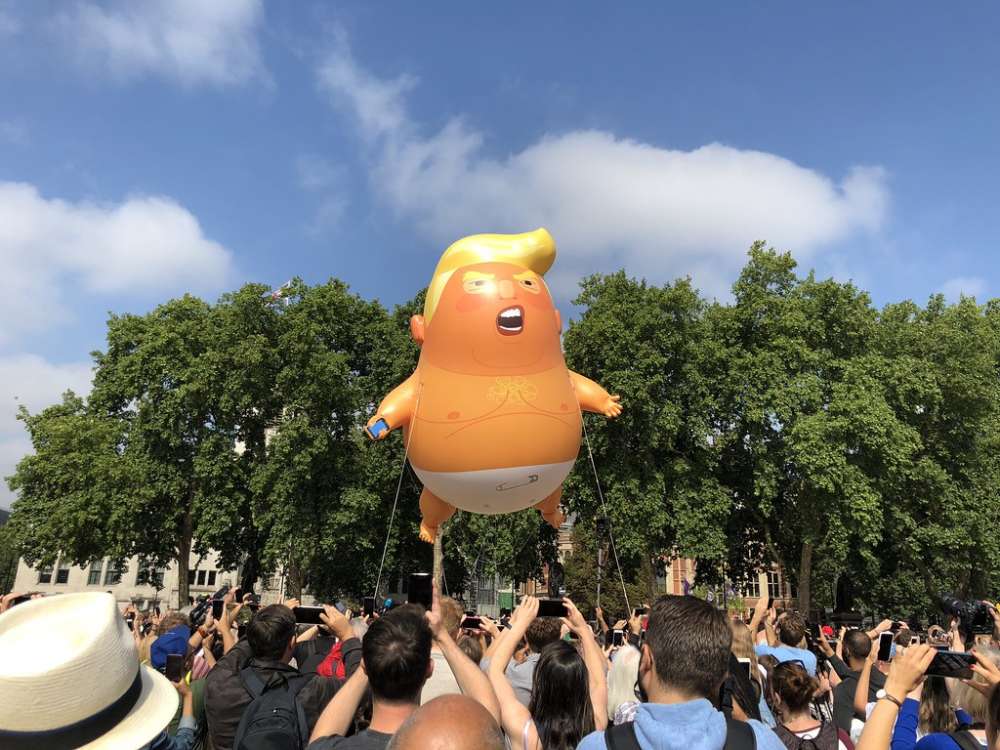 A blimp depicting Donald Trump as a snarling, nappy-wearing orange baby will fly outside Britain’s parliament when the U.S. president makes a state visit next month if protesters can raise 30,000 pounds for advocacy groups.

At the invitation of Queen Elizabeth, President Trump and First Lady Melania Trump are due in Britain on June 3-5 for a state visit – a pomp-laden affair involving a carriage trip through London and a banquet at Buckingham Palace.

Britain’s so called special relationship with the United States is one of the enduring alliances of the past century, but some British voters see Trump as crude, volatile and opposed to their values on issues ranging from global warming to his treatment of women.

The blimp greeted Trump when he visited Britain in 2018, in what he described as an attempt to make him feel unwelcome, and the man behind the giant inflatable said he would let it fly again if a crowdfunding campaign can raise 30,000 pounds for groups backing causes from climate action to women’s rights.

“The blimp will get in the air when Donald Trump is on these shores,” Matt Bonner, its designer – who casts himself as a “Trump babysitter” – told Reuters. “The point of this is to mock Donald Trump, to give him a taste of his medicine.”

“What we want to do this time is to use the power, the momentum of Trump baby to help support people on the ground who are fighting against Trump policies and Trumpism more generally,” Bonner said.

London’s mayor Sadiq Khan gave permission for the six-metre tall balloon to fly next to the Palace of Westminster in central London during Trump’s previous visit, provoking anger from the U.S. president’s supporters who said it was an insult to the leader of Britain’s closest ally.

A spokeswoman for Khan’s Greater London Authority (GLA) said any application to fly the blimp on land that the GLA managed would be judged by the same criteria as last time by GLA officials, the police and the Civil Aviation Authority.

“A state visit legitimises a very controversial figure who is perpetuating divisions in our society and challenging that is much more important than any special relationship we have with the United States,” Bonner said.

While the British monarch makes the formal invitation for a state visit, the visit was offered by Prime Minister Theresa May when she became the first foreign leader to visit him after his inauguration in January 2017.

During his trip last year, Trump shocked Britain’s political establishment by giving a withering assessment of May’s Brexit strategy. He said she had failed to follow his advice, such as suing the EU, but later said May was doing a fantastic job.

“The baby always had an element of fun, but we’re deadly serious about standing in solidarity with those affected by Trump and the politics he represents across the world,” said Sheila Menon, one of the team behind the blimp.

But Trump is only the third U.S. president to be accorded the honour of a state visit, after George W. Bush in 2003 and Barack Obama in 2011.

Last year, as hundreds of thousands protested across Britain, Trump was feted with a lavish dinner at Blenheim Palace, the birthplace of British World War Two leader Winston Churchill. He and Melania also had tea with the queen at Windsor Castle.

The president then breached royal protocol by publicly disclosing details of a conversation he had with the monarch about the complexities of Brexit.

This year, the visit will include a meeting with May in Downing Street and also a ceremony in Portsmouth on the south English coast to mark the 75th anniversary of the D-Day landings in Normandy, France during World War Two.

MPs have unanimously approved a supplementary budgetary bill of €220 million that covers Labour Ministry programmes to support employment as well as a new...
Read more
World

Police have picked up more than 30 irregular migrants who crossed from the Turkish occupied areas, the Cyprus News Agency reports. It said that six...
Read more
World

The owner of British Airways is considering a legal challenge to Britain's quarantine plan, as relations between airlines and the government are frayed by...
Read more