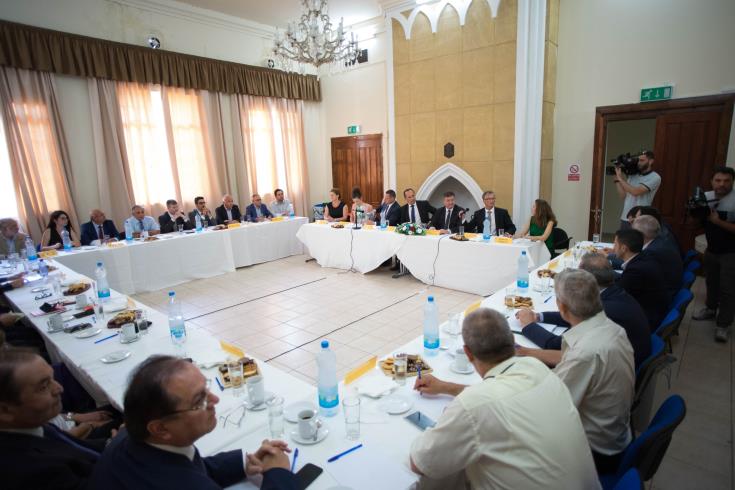 Slovakia will continue to support the bicommunal meetings between political parties on the island, as long as Cypriots find them useful, the Slovak FM Miroslav Lajcak has said.

The Minister who pays Cyprus a visit, attended on Monday afternoon a meeting of the leaders and representatives of Greek Cypriot and Turkish Cypriot political parties, under the auspices of the Slovak Embassy at Ledra Palace hotel in Nicosia. This year marks the 30th anniversary of bicommunal dialogue initiated by former Ambassador of Czechoslovakia, Slovak diplomat Emil Keblusek.  The parties reaffirmed their will to enrich the dialogue and expressed their support for ongoing efforts by UN Secretary General for the resumption of the talks under the aegis of the UN.

After today’s meeting, the FM read a joint communique on behalf of the participants who paid tribute to the former Ambassador Keblusek who initiated the first meeting of political parties from both communities, giving them the opportunity to exchange views on the Cyprus issue.

“This meeting laid the foundation for their regular dialogue on various aspects of the Cyprus issue. Despite existing impasse in reaching an agreement, we still believe in the dialogue based on the spirit of friendship, cooperation, respect and mutual understanding. It is a legacy of late Ambassador Keblusek to all Cypriots”, the joint statement says.

The parties expressed their gratitude to the Slovak Republic, the Slovak Ministry of Foreign and European Affairs and the Embassy in Nicosia for their persistence in facilitating the bicommunal dialogue for already three decades as well as their appreciation for the patience, impartiality and professional approach of all Slovak diplomats who have been involved in the organization of bicommunal meetings and activities in the context of confidence building measures.

As the statement points out, the parties reaffirmed their will to continue and when possible to enrich this dialogue as these meetings represent a very useful and many times unique occasion for direct contacts and exchange of views among Greek Cypriot and Turkish Cypriot politicians.

“The Greek Cypriot and Turkish Cypriot political parties expressed their support for ongoing efforts of the UN Secretary General to ascertain a common ground for the resumption of talks which should lead to the reunification of the island on the basis of federal solution as defined by the relevant UNSC resolutions and in line with the international law and the EU values and principles” the statement reads.

Later this evening the FM will attend an event hosted by the Slovak Embassy on the occassion of the 30th anniversary of the bicommunal dialogue and will deliver a speech at the opening of a photo exhibit titled “30 Years of Peace Dialogue in Picture”.

By In Cyprus
Previous articleNorth Korean leader’s slain half-brother was a CIA informant -Wall Street Journal
Next articleCar sales drop by 8.6% in January – May 2019