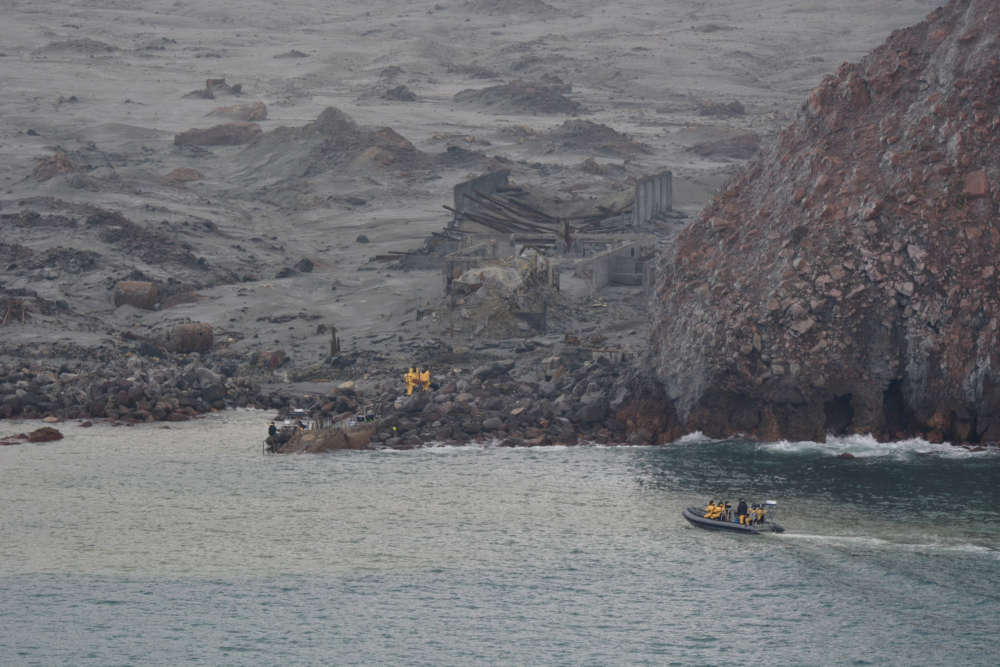 A New Zealand military team in gas masks and hazmat suits recovered six bodies on Friday from the volcanic island that fatally erupted earlier this week, as doctors worked to save badly burned survivors.

An eight-person bomb disposal squad set off before dawn and spent four hours on White Island, which experts said could erupt again.

Six of the eight bodies on the island were successfully retrieved and taken to a naval patrol vessel for transfer to the mainland for disaster victim identification.

“Today was all about returning them to their loved ones,” New Zealand Prime Minister Jacinda Ardern told a media conference in Whakatane, the mainland coastal town where about 100 family and local community members prayed and sang together.

“We know that reunion won’t ease that sense of loss, of suffering because I don’t think anything can but we felt an enormous sense of duty as New Zealanders to bring their loved ones home.”

The team was unable to find and recover the remaining two bodies as the cumbersome protective equipment they needed to wear slowed down the tricky operation.

Police said dive teams deployed in the waters around the island, which is also known by its Maori name of Whakaari, had not found anything and would try again on Saturday.

“It’s not over yet,” New Zealand Police Commissioner Mike Bush told reporters in Whakatane, some 50 km (30 miles) west of the island.

The volcano, a popular tourist destination for day-trippers, erupted on Monday, spewing ash, steam and gases over the island. Among the 47 people on the island at the time were Australian, U.S., German, Chinese, British and Malaysian tourists.

The official death toll stands at eight as the bodies on the island have been classified as missing until they are formally identified. More than two dozen more people are in hospitals across New Zealand and Australia, most with severe burn injuries.

A blessing was held at sea with the victims’ families before the mission was launched.

“Where we come from we don’t leave anyone behind, no one gets left behind,” Te Moana said of his Maori community. “We all move as one.”

Relatives sat among the coffins of those who were recovered on Friday, not knowing which belonged to their family member, senior legislator Kelvin Davis told reporters.

“But it was just an opportunity, as they said, regardless of whether we’re from Australia or New Zealand or wherever, that the moment we’re one whanau (family) and will mourn everybody as if they are our own.”

Australians made up the majority of the tourists visiting the island at the time of the explosion and those recovered on Friday.

Many of them were passengers on a Royal Caribbean Cruises ship on a day tour to the island.

Australian Foreign Minister Marise Payne said 11 injured Australians have been transferred from overloaded burns units in New Zealand, with one more to be repatriated in the “coming days”.

Peter Haertsch, the doctor in charge of the burns unit caring for the returned Australians, said they been exposed to fast-moving clouds of very hot volcanic gas, pumice and ash.

“They have suffered severe contact skin burns with severe injuries due to inhalation of gas and ash, and we are looking at extensive and intensive care for these patients, some of whom are still in a life-threatening condition,” Haertsch said in an emailed statement.

Payne said Australia was working with the United States and other countries to source some of the urgently needed 1.2 million square cms (186,000 square inches) of skin, an amount that far exceeds annual donations in New Zealand and Australia.

“It’s jarring for us to hear just the sheer scale of that need because it amplifies just how horrific some of the injuries are,” Ardern told ABC Radio.

Authorities had faced growing pressure in recent days from families of some victims to recover the bodies as soon as possible.

There has also been criticism that tourists were allowed on the island at all, given the risks of an active volcano.

Pressed to discuss whether the island should have been open, Ardern said she didn’t want to preempt an inquiry which has been launched.

“I think families would be best served by that, rather than speculation.”