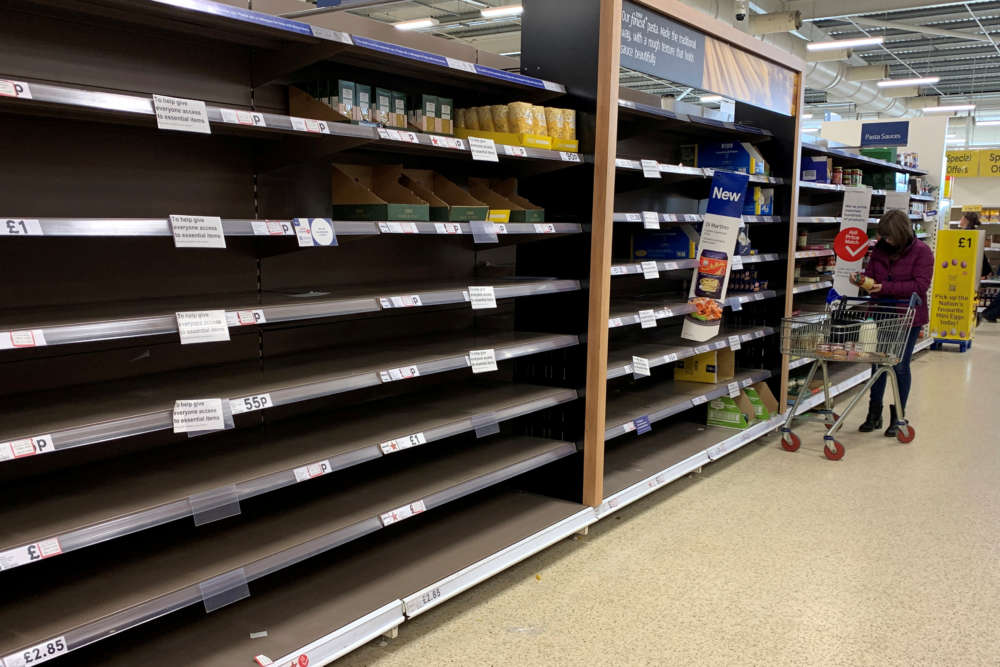 Britain on Saturday told people who were panic-buying and hoarding food due to the coronavirus outbreak to calm down, pointing to a video on social media showing an exhausted nurse driven to tears by finding shelves bare after her shift.

Shoppers have been emptying the shelves in many supermarkets over the past week, with some wrestling over toilet roll and others hoarding everything from pasta to frozen peas as the government told people to stay home and avoid contact.

A billion pounds ($1.2 billion) of extra food have been squirrelled away over the past three weeks, putting massive pressure on supermarkets, environment and food minister George Eustice said.

At a news briefing, he urged people to “be responsible when you shop and think of others”.

“There is more than enough food to go round and our food supply chain is able to expand production to cope with increased demand,” he said.

“Buying more than you need means that others may be left without, and it is making life more difficult for those front-line workers such as our doctors and nurses and NHS (National Health Service) support staff.”

Despite such appeals, not least from Prime Minister Boris Johnson and major supermarkets, shelves of meat, pasta, tinned goods and toilet roll were empty on Saturday in some London supermarkets. Some had brought in extra guards and set up special queuing zones.

The government has set aside rules restricting deliveries to supermarkets to help stores cope with increased demand.

It has also set aside competition rules so that supermarkets can share staff and delivery vehicles and coordinate opening times to ensure that every part of the UK is properly supplied.

The video posted by the critical care nurse has been shown on BBC national news.

“Frankly we should all be ashamed that that has to happen,” said NHS medical director Stephen Powis. “It’s unacceptable. These are the very people that we will all need to look after perhaps us or our loved ones in the weeks ahead.”

Eustice said that, in the last week, manufacturers had produced around 50% more food than they usually would.

“We don’t think there is a risk of food running out,” he said. “The challenge we have is getting food to the shelves and keeping it there.”

By In Cyprus
Previous articleBritain’s NHS gets capacity boost from private hospitals to fight coronavirus
Next articleCoronavirus: MoH clarifications on special shopping hours for vulnerable