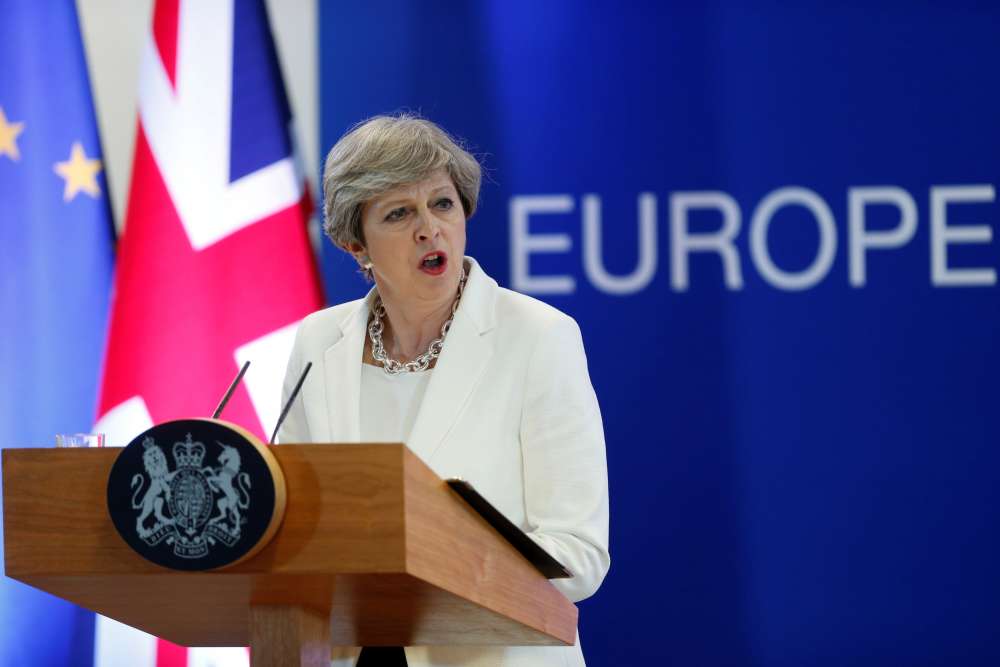 British Prime Minister Theresa May published her blueprint for relations with the European Union after Brexit on Thursday, putting at its core a plan for a free trade area for goods that has angered many in her party.

In a long-awaited white paper policy document, her government said its negotiating position had “evolved” and there was one major shift – the government abandoning plans for close trade ties for Britain’s huge financial services sector.

But in other areas, the government outlined its plans to retain the closest possible ties with the bloc in the 98-page document, including participating in its agencies for chemicals, aviation and medicines in a move aimed at pleasing business.

By pushing for such close ties, the paper may do little to ease the anger of Brexit supporters in May’s Conservative Party, who have described the idea of a combined customs territory as a betrayal of the prime minister’s pledge for a clean break.

It did not get a ringing endorsement from U.S. President Donald Trump, who said in Brussels before the white paper’s publication that he was not sure May’s approach was what Britain voted for in the 2016 referendum.

In response, May, in Brussels with Trump for a NATO summit, said the proposal was “delivering on the vote of the British people to take back control of our money, our laws and our borders.”

Dominic Raab, appointed Brexit minister on Monday after his predecessor quit in protest at the government’s approach, said: “Now, it is time for the EU to respond in kind.

“We approach these negotiations with a spirit of pragmatism, compromise and, indeed, friendship, I hope, I trust that the EU will engage with our proposals in the same spirit,” he told parliament, where he was jeered for not giving copies of the document to lawmakers.

The EU’s chief negotiator, Michel Barnier, said he would analyse the paper with member states and the European Parliament and repeated the bloc’s offer for an ambitious free trade agreement with “effective cooperation” on issues.

“Looking forward to negotiations with the UK next week,” he said on Twitter.

With less than nine months before Britain is due to leave the bloc, May has been under pressure from businesses, EU officials and her own lawmakers to spell out her negotiating position to unblock the all-but-stalled Brexit talks.

She thrashed out an agreement at her Chequers country residence on Friday, but that was undermined when two of her leading ministers, and Brexit campaigners, quit their jobs in protest at her plan to keep close trade ties.

Her team hopes the publication of the white paper will ease concerns among many Brexit supporters after the resignations of former foreign secretary Boris Johnson and former Brexit negotiator David Davis. But it might add fuel to a simmering rebellion in her Conservative Party.

The white paper confirms May’s desire for a “business-friendly” Brexit, trying to protect manufacturers with complex supply chains across the EU which have warned a clean break would have cost British jobs.

But the government has abandoned a plan for close ties with the EU for financial services, instead saying it would push to improve the EU’s legal mechanism for access to countries outside the bloc known as “equivalence” where access is patchy and can be revoked at short notice.

The head of policy at the City of London, Catherine McGuinness, described the white paper as a “real blow”.

The white paper acknowledges there will be more barriers to Britain’s access to the EU market than is the case today, but it has prioritised maintaining trade ties for goods and details a plan for a facilitated customs arrangement with the EU.

It also spells out Britain’s desire to participate in EU agencies that provide authorisation for goods – the European Chemicals Agency, the European Aviation Safety Agency and the European Medicines Agency.

Britain would accept their rules and contribute to their costs, the white paper said, but recognising that Britain is no longer a member state.

While ending freedom of movement of people, Britain will try to ensure that tourists can travel freely around Europe and will try to make its immigration policy better cater for business needs.

It also proposes new bodies to help interpret rules and regulations and to resolve disputes, but says Britain will still pay due regard to the European Court of Justice.

With the detail now published, May hopes to speed up the talks with the EU before Britain leaves in March next year.

But she may encounter resistance at home, where some Brexit campaigners will seek to harden her plan by changing her customs legislation in parliament next week.

Raab said such criticism was not justified. He described the white paper as “a vision that respects the result of the referendum, and delivers a principled and practical Brexit.”