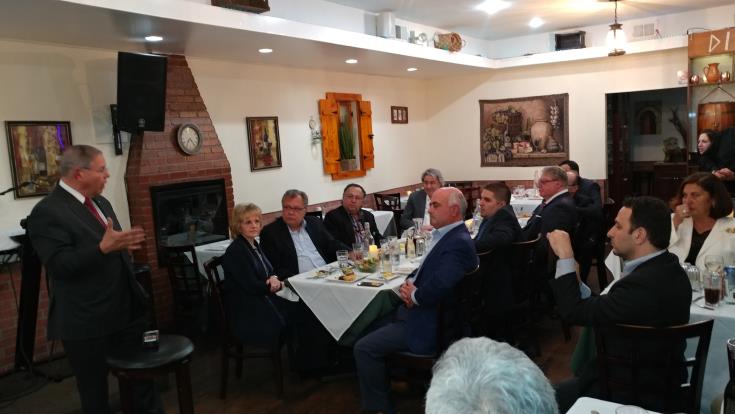 Senator Robert Menendez, a Democrat of New Jersey, spoke Friday of a new policy for the United Sates in the Eastern Mediterranean, distancing themselves from Turkey, while granting Cyprus and Greece a more prominent role.

Speaking during a fundraising event, in Astoria, the Senator also expressed the view that the State Department and US Congress are at the brink of differentiating their views over Turkey, due to Turkish President Recep Tayyip Erdogan’s actions.

Menendez said in his speech that he is on the side of Cyprus and Greece as a matter of principle and because he believes in their just cause.

Referring to international law violations and provocations, among others in Cyprus’ exclusive economic zone, the Senator said he told the State Department that Turkey can’t keep sending its military ships to harass oil companies.

Turkey is distancing itself from the principles of a secular country, while Erdogan retains his authoritarian rule, bombs the Kurds – a US ally – and blocks access to US armed forces, he said.

According to Menendez, what’s happening with Turkey in the Aegean and in Cyprus is unprecedented. I hope that we will now be able to push more intensely for those matters and succeed in changing the traditional views about Turkey in the State Department, as well as among members of the Congress, he added, pointing that Turkey is moving to the opposite direction.

He also said that he discussed with Wess Mitchel, the Assistant Secretary of State for European and Eurasian Affairs, the need for a different Eastern Mediterranean policy, that will involve Cyprus as a fully-fledged ally, terminate the arms embargo and engage Greece even further, while seeking neighboring countries to act as a counterweight to Turkey. All these are in the interest of both the US and other countries in the region, the Senator said and asked for support to get reelected in the Senate.

By In Cyprus
Previous articleThe existing system of guarantees in Cyprus should be abolished, says EPP Secretary-General Antonio López
Next articleThousands celebrate Jerusalem Day as US embassy set to open in city