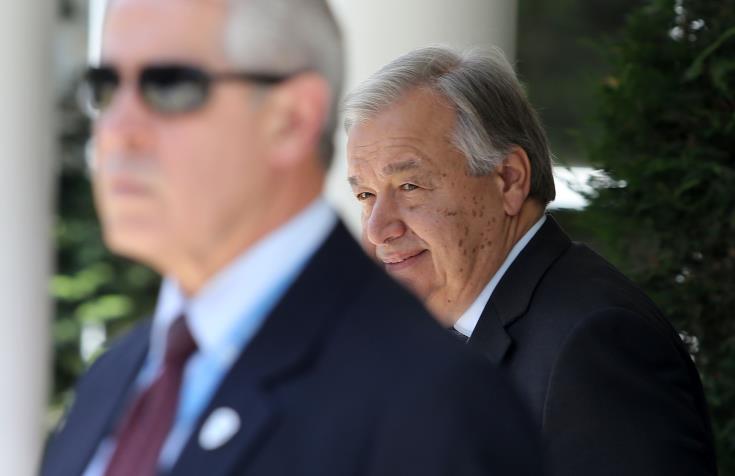 A briefing of the UN Security Council on the Secretary-General’s Good Offices report on Cyprus will be held on November 25, the same day with the trilateral meeting will be held in Berlin, where the UNSG Antonio Guterres will have a dinner with President of Cyprus Anastasiades and Turkish Cypriot leader Mustafa Akinci.

According to the program of work announced by the UK Presidency of the Security Council. the briefing of the UN Security Council will take place in the afternoon (local time), on November 25.

The Security Council requested through Resolution 2483, last July, that the Secretary-General submits his report by November 15. The two Cyprus leaders have already submitted the written updates which the Security Council asked to be included in the Good Offices report.

Paragraph 15 of the resolution adopted last July says that the Security Council requests the Secretary-General to submit by 15 November 2019 a report on his Good Offices, in particular on progress towards reaching a consensus starting point for meaningful results-oriented negotiations leading to a settlement.

Moreover, the Security Council encouraged the leaders of the two communities to provide written updates to the Good Offices Mission of the Secretary-General on the actions they have taken in support of the relevant parts of this resolution with a view to reaching a sustainable and comprehensive settlement, and further requested the Secretary-General to include the contents of these updates in his Good Offices report.

Karen Pierce, the UK Permanent Representative to the United Nations and Security Council President, said that it is a coincidence that the SC briefing will be held on the same day the Secretary-General is meeting with Cyprus President Nicos Anastasiades and Turkish Cypriot leader Mustafa Akinci, in Berlin, when replying to a relevant question.

The Republic of Cyprus has been divided since 1974, when Turkey invaded and occupied its northern third. Repeated rounds of UN-led peace talks have so far failed to yield results. The latest round of negotiations, in July 2017 at the Swiss resort of Crans-Montana ended inconclusively.

By In Cyprus
Previous article‘Driver using feet to steer vehicle not an isolated incident’, REACTION (vid)
Next articlePolice Chief: 90 fixed and 20 mobile traffic cameras will be installed in 2020